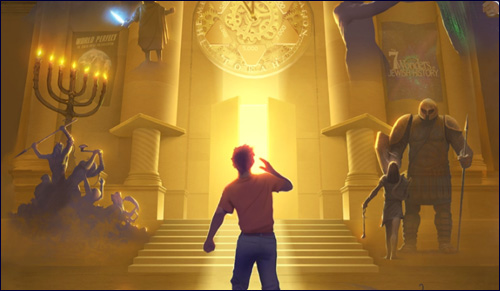 Ken Spiro’s new book explores why the Jewish people, a tiny nation, plays such a huge role in history.

When John F. Kennedy was a young man he told his mother, Rose Kennedy, that he wanted to be an actor. She answered, “Why play someone great when you can be someone great?” He certainly took her advice seriously.

The same can be said about us. We run off to the movies to escape our mundane existence and feel like we are part of something bigger, part of a great adventure.

But if it’s adventure that we want, we need look no further than our own history which is as exciting, action-packed and intense as the greatest Hollywood blockbuster! Unfortunately too many Jews don’t have the knowledge and perspective to realize how epic and unbelievable the story of the Jewish people really is.

Jewish history is so unique and unbelievable, but when the unbelievable happens to you on a regular basis you get desensitized to it and it just seems normal. David Ben Gurion, Israel’s first prime mister, probably said it the best: “In Israel, in order to be a realist, you must believe in miracles.” This is true not just about modern Israel but for all of Jewish history.

Even a quick look at some of the major facts of Jewish history clearly shows that there is something remarkable and unique about the Jewish people and their history:

Even the most cursory look at Jewish history begs us to ask so many questions:

Throughout history, many of the greatest minds have taken note of the fact that there is something very unique – even supernatural – about Jewish history. Soviet-era Russian political and Christian religious philosopher Nicholai Berdyaev summed it up beautifully when he wrote:

Their [the Jews] destiny is too imbued with the "metaphysical" to be explained either by material or positive historical terms...Its survival is a mysterious and wonderful phenomenon demonstrating that the life of this people is governed by special predetermination...The survival of the Jews, their resistance to destruction, their endurance under absolutely peculiar conditions and the fateful role played by them in history; all these point to the particular and mysterious foundations of their destiny... – Prof. Nicholai Berdyaev The Meaning of History. (London. 1935)

Jewish history is not a Hollywood epic; it is reality, a reality that is relevant to each and every Jew on the planet. The Jewish historical experience begs us to ask so many important and pertinent questions:

My just-published book “Destiny” attempts to answer these and many more questions that at are at the center of Jewish identity. This book explores the meaning of the Jewish people’s mission, from its very beginnings almost four thousand years ago to today and beyond. And it’s the greatest real-life story ever told.