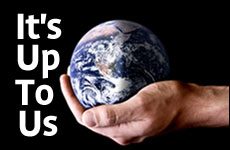 Rav Noach taught that every individual is responsible to change the world.

The Talmud in Sanhedrin teaches: Bishvili nivra ha'olam – "the world was created for me." Rav Noach Weinberg asked, "In what way is the world ours? It is not ours to eat. Rather, it is ours to take care of." He would explain that deep down inside, taking responsibility is what we all yearn for. "If you could press a button that would immediately solve all the word's problems, everyone in the world would want the privilege of making that happen." Yet due to the enormous amount of effort it requires, most of us give up trying.

Rav Noach would challenge even the newest students to take responsibility. "Genocide in Darfur; rampant poverty; the crumbling American family – and you want to go to business school? What are you doing about these problems?"

Invariably, students would respond: "I am just one person; what can I do about it?" Rav Noach would then answer, "If the Almighty, Creator of this Universe, would help you, could you solve these problems?"

Notice that nobody says, "It's not my problem"; they say, "What can I do about it?" Subconsciously they all recognize it is their responsibility – but they exempt themselves because of a lack the clarity and resources to tackle the job. However, by showing people that they have the ultimate resource – Hashem – on their side, Rav Noach empowered people to try.

Rav Noach said that caring for others is the cornerstone of taking responsibility, and would cite the actions of Moses. The Torah says,"He went out to his brothers and saw their pain" (Exodus, 2:12). Rashi explains, Moses left Pharaoh's palace not only to see the pain of the Jews, but to personally identify with their pain. This was the foundation upon which Moses' leadership was built, and this, Rav Noach taught, is ultimately what drives each of us to take responsibility.

Up to the Almighty

Rav Noach always said that Aish HaTorah was not a kiruv (outreach) organization, but rather a vaad hatzala – emergency rescue agency. He had strategies and programs not only to fight assimilation, but to address physical threats to the Jewish people as well: anti-Semitism on college campuses, anti-Israel bias in the media, and the terrifying threat of radical Islam.

Many times, Rav Noach's students would challenge him about these ambitious goals. "Why do we have to save the Jewish people? It requires too much money, and we're not even sure how to achieve it. Let's lower our goals and just reach out to some Jews."

He would always answer in the same way. "The reason why you think we cannot save Klal Yisrael is because you think we can save several hundred Jews. In truth, you can't even lift a finger without the Almighty giving you the power to do so. So we might as well ask our Father for the ultimate!"

Rav Noach would often tell a story to illustrate this point: At any large construction site, gigantic cranes are lifting several tons of building materials. At the location where the materials are placed, one worker is positioned to guide the load, to ensure that it lands in the correct spot. From afar, the fool looks at this worker, and says, "He is stronger than Samson!" But the wise man steps back and sees that in reality it is the crane doing the work; the worker is just helping it land in its proper place.

Rav Noach would then cite the prophet's promise that in the End of Days, the Jewish people will do teshuva. The Almighty is bringing back His children; the wise man puts out his hands and leads them home. As the Mishnah says: "Whoever takes on communal responsibilities, God gives us credit as if we accomplished it on our own" (Ethics of the Fathers 2:2).

During his days as a student in yeshiva, Rav Noach was known for his enormous intellectual powers and his 18-hour daily learning schedule. But like Abraham, who felt impelled to go out and bring people closer to God, Rav Noach gave up his precious learning hours in order to fulfill the greater responsibility of bringing God-consciousness to the world.

Does this mean that Rav Noach's spiritual level was compromised? On the contrary. The Chasam Sofer, in his introduction to Teshuvos (Yoreh Deah), explains:

"Had Abraham gone into isolation and spent his time in peaceful meditation, contemplation and similar practices, he would have risen to the Heavens and would have become a angel. Abraham, however, chose to walk a different path in life. In his wisdom he decided that God was not particularly interested in people becoming angels – perfecting their own soul, but ignoring others. God is not interested in the righteous leaving behind a community of scoffers and sinners. That is what had happened to the generations of Chanoch and the Flood.

"Abraham learned from history. The experiences of Chanoch and subsequent generations indicated that a person should rather minimize his own perfection and the development of his own soul in order to increase Kevod Shamayim – God-consciousness. It is much more important to minimize the number of rebels against His will and to increase the numbers of His servants and of those who know Him, than to concentrate on one's own self-development."

Rav Noach understood that when you do the Almighty's will, you never lose. As the Chovos Halevavos says (Ahavas Hashem, ch. 6): Even someone who has personally scaled the heights of self-perfection, cannot compare to the level achieved by someone who teaches others about God.

Rav Noach taught that if we selflessly act for the sake of God to bring back God's children, our reward will be enormous, as the Zohar (Volume 2, 129a) says: "The reward that a person receives for bringing people back to the Almighty's service is completely immeasurable."

The Dubno Maggid explains this point with the following parable There was a wealthy man who reached the age of 70 and decided to make a celebration. He sent a letter to his two sons living in another country that said, "I want you and your families to celebrate with me. Do not be concerned with the expenses, because anything that you spend in my honor, I will give back to you 20 times. If you spend $1,000 dollars, I will give you $20,000. If you spend $20,000 dollars, I'll give you $400,000."

The older son was a man of means. After hearing the offer, he went out and bought the nicest carriage, the nicest clothes for his children, a new shtreimel for himself, and jewels for his wife – because he knew that the more you spend, the more you get back.

Dressed in all their finery, they began their journey to his father's home. On the way he passed the house of his younger brother, who was a poor fellow with no money at all. He could not even borrow money, because no one would give him credit. Suddenly his wealthy brother appeared and he said to the poor brother, "Aren't you coming?"

The poor brother answered, "I have no money to rent a carriage."

"No problem. Gather your family and you will travel in mine." So the poor brother, with his family, climbed into the carriage and off they went to the party: the older brother's family in their finery, and the younger son's family in patched and worn-out clothes.

At the grand party, the older brother approached his father and said, "I spent $50,000 dollars for this party, so according to your offer I am entitled one million dollars."

The father looked at him and said, "I'm not giving you a penny."

"I said that anything you spend to honor me, I'll give you back 20 times. But you didn't spend this money for my honor; you spent it for your own honor. If you were really concerned with honoring me, then you would have taken care of your younger brother as well."

When telling this story, Rav Noach would pound his fist and say: "The entire Jewish people are being led astray. It's a Chillul Hashem (desecration of God's Name) of historic proportions. How do we even raise our heads? In America alone, over one million Jews do not identify themselves as Jewish. Do you think they found these alternatives more enlightening than our Torah, or were they so ignorant of their own heritage that non-Jewish society reached them without a fight? We left our brothers to die! What are we going to answer?"

Rav Noach would conclude: "If you are concerned with the Almighty's honor, you need to care for his children who are spiritually impoverished. By doing so, you will be entitled to the most profound reimbursement possible!"

What The Angel Taught You

Fire of the Torah
What Does Kosher Mean Literally?
Live Abortion Panel
Morality and Abortion: Three Views
Comments
MOST POPULAR IN Teachings
Our privacy policy