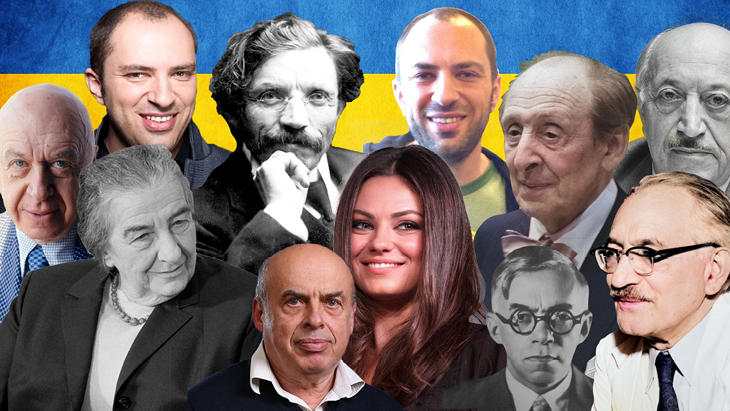 Pres. Zelensky joins a long list of amazing Ukrainian Jews who have made the world a better place.

In the weeks since Russia invaded Ukraine, sparking untold suffering and destruction and causing the largest refugee crisis since World War II, Ukraine’s Jewish President, Volodymyr Zelensky has emerged as a hero. Zelensky has rallied nations and individuals across the world and he’s been open about his Jewish background, explaining to journalists that he is the grandson of Holocaust survivors and grew up in “an ordinary Soviet Jewish family.”

Yisrael ben Eliezer was born in 1700 in Poland, close to the Ukrainian border. He became a renown mystic leader and is the founder of the Jewish Hasidic movement, which emphasizes worshiping God with intense joy. He amassed a devoted following of Jews who called him the “Ba’al Shem Tov,” the “Good Master of the (Divine) Name”. He settled in the Ukrainian city of Medzhybizh sometime in the 1730s and taught Jews there that even the most simple Jew is able to reach the heavens with simple, heartfelt prayers.

He incorporated elements from Jewish mysticism into his teachings, emphasizing that every single element of the world contains a Divine spark. Huge numbers of Ukrainian Jews embraced the Hasidic movement which later spread throughout Europe and the world. 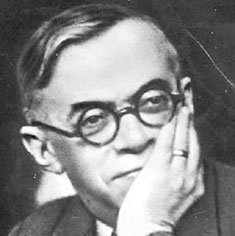 Born in 1880 in the city of Odessa, Ze’ev Jabotinsky grew up completely assimilated. He had no connection to Judaism until he was an adult. He became a celebrated Russian journalist, filing stories from across Europe.

In 1903, the infamous Kishinev Pogrom changed the course of Jabotinsky’s life. Over three days of rioting, beginning on Easter Sunday, hundreds of Jews in the Moldovan city of Kishinev were attacked, injured, and killed. Their property was destroyed and Jews cowered in fear as the murderous mob rampaged unchecked. Hundreds of Jewish women were violently assaulted. It became clear that Jews had little future in Europe.

Jabotinsky was convinced Jews needed a Jewish state to be secure and became an ardent Zionist. He helped found the Jewish Legion to help British forces during World War I, and advocated tirelessly for a Jewish state in the land of Israel. Expelled from the land of Israel in 1929 by the British authorities, Jabotinsky continued to advance the cause of Jewish liberation, founding the underground Irgun military force and insisting on Jewish statehood. He died in exile in 1940. 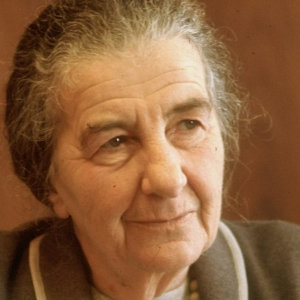 Israel’s 4th Prime Minister was born in 1898 in Kyiv. Her family was destitute. She recalled her father looking for work and having only bread and herring to eat. Golda wrote in her memoirs, “Despite everything, on Friday nights our house was always full of people, members of the family mostly. I remember swarms of cousins, second cousins, aunts and uncles. None of them was to survive the Holocaust, but they live on in my mind’s eye, sitting around our kitchen table, drinking tea out of glasses and, on the Sabbath and holidays, singing for hours - and I remember my parents’ sweet voices ringing out above the others.”

Meir went on to become one of the architects of the Zionist movement. She worked for Israel’s Federation of Labor; after World War II she negotiated with the British authorities to let in desperate Jewish refugees, and conducted diplomacy with Jordan’s King Abdullah I, trying (in vain) to convince him to refrain from attacking a future Jewish state.

Golda Meir was one of the signatories of Israel’s Declaration of Independence on May 14, 1948, and served as Israel’s ambassador to Russia, as Israel’s Foreign Minister (she was the world’s only female foreign minister at the time), and in became Israel’s Prime Minister in 1969, serving until 1974. 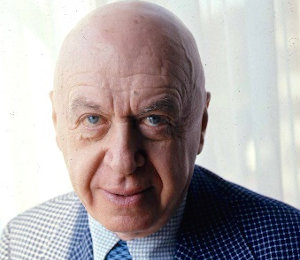 The groundbreaking film noir director was born in 1905 in Vyzhnytsia, Ukraine. He started his career as a theater director, and later became one of the most famous movie directors in the world. In his long movie career, he directed over 40 films, including Laura, Carmen Jones, The Man With the Golden Arm, Bounjour Tristesse, Porgy and Bess, Anatomy of a Murder, Exodus and Tell Me You Love Me Junie Moon. 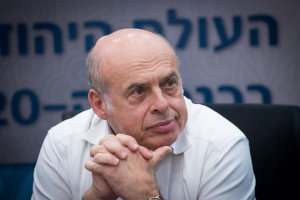 The famous former Soviet refusenik and Israeli politician was born in Donetsk, Ukraine in 1948. As a young man he worked as an interpreter for the Soviet dissident Andrei Sakharov. As Natan explored his Jewish identity, he became a spokesman for the Soviet Jewry dissident movement. He became a refusenik in 1973 after his application to emigrate to Israel was denied, and was arrested on trumped-up charges of treason and spying in 1977.

Sentenced to 13 years in a labor camp in Siberia, Natan coped with his imprisonment by focusing on his Jewish life. He later observed that in prison, as he embraced his Jewish identity, he found himself feeling like a free man.

Natan Sharansky was finally allowed to emigrate in 1986. He moved to Israel and later served as President of the Zionist Forum and editor of the Jerusalem Report. He formed a new political party in 1995, and was elected to Israel’s Knesset, eventually serving in various ministerial roles and as Deputy Prime Minister from 2001 to 2003. He served as Chairman of the Executive for the Jewish Agency from June 2009 to August 2018 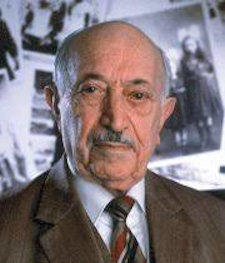 The famed Nazi hunter was born in 1908 in Buchach, Ukraine. During the Holocaust he was imprisoned in five Nazi concentration camps. After surviving the Holocaust, he dedicated his life to bringing Nazi criminals to justice and to educating future generations about the Holocaust.

In the days after his liberation from Mauthausen concentration camp, Wiesenthal handed American prosecutors a list of Nazis and offered his personal testimony to their crimes. In 1960 Weisenthal, his wife Cyla, and their daughter Paulinka set up the Jewish Documentation Center in Vienna. Working out of a tiny office with little help, they scoured telephone directories to locate Nazi war criminals. Their efforts led to the 1963 arrest of Karl Silberhauer, who helped arrest Anne Frank and her family, Franz Stangl, the commandant of Treblinka and Sobibor death camps, and many others. In 1977, the Simon Wiesenthal Center in Los Angeles carried forward his vision; it is a global Jewish human rights center that researches the Holocaust and educates people about its horrors. 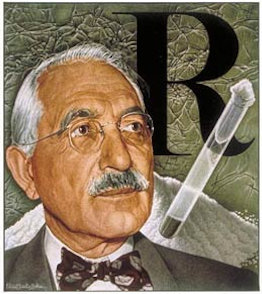 Born in 1888 in Kiev, Selman Waksman became one of the world’s most foremost biochemists. He not only discovered many antibiotics, he coined the term as it’s used today. A teacher at Rutgers University for 40 years, Dr. Waksman was awarded the Nobel Prize for Medicine in 1952. He’s credited with developing over a dozen antibiotics, including those that treat tuberculosis. He used the proceeded of his Nobel Prize to fund the Waksman Institute of Microbiology at Rutgers to continue research. 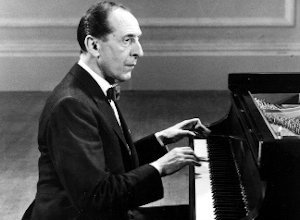 One of the greatest pianists of the 20th century, Vladimir Horowitz was born in 1903 in Kyiv. He redefined many of the most famous pieces of classical music, interpreting standards by Chopin, Brahms, Liszt, Rachmaninoff and Tchaikovsky using his prodigious talent and flamboyant style. Horowitz used to say he wanted to continually evolve as an artist, and “grow until I die.” 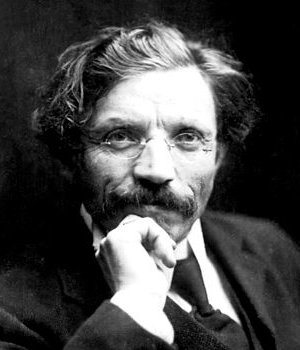 Sholom Aleichem (which means the traditional Hebrew greeting “Peace to you”) was the pen name of Sholom Rabinovitsch. He was born in 1859 in the Ukrainian town of Pereyaslav-Khmelnitsky. Though he originally wrote in Hebrew and Russian, Sholom Aleichem later began to write exclusively in Yiddish.

His first Yiddish story appeared in 1883, and he went on to publish more than 40 Yiddish books, including plays, short stories and full-length novels. His stories of Tevya the milkman formed the basis of the 1964 musical Fiddler on the Roof. A wealthy man, Sholom Aleichem used his personal fortune to underwrite Yiddish publishing and support struggling Yiddish authors. 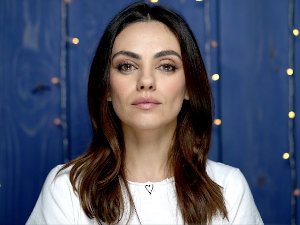 The actress was born in Chernivtsi, Ukraine in 1983 and immigrated to the United States when she was seven years old. Despite the fact that her husband Ashton Kutcher isn’t Jewish, Mila has been open about the fact that her family, including her two children, Wyatt and Dimitri, celebrate Shabbat. “We do Shabbat at our house,” she’s told reporters. When her daughter Wyatt was young, she used to wake up excited every Friday morning, looking forward to the family’s Friday night Shabbat dinner.

Mila led a moment of silence in solidarity with Ukraine at the Oscars ceremony this year, and she and her husband have been publicly thanked by Ukrainian President Zelensky for helping Ukraine in its hour of need. 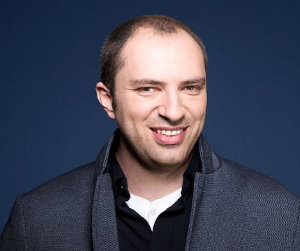 The billionaire founder of WhatsApp was born in Kyiv in 1976. After the fall of Communism, Jan and his mother moved to California, but life was far from easy in their new home. His father remained behind in Ukraine, and soon after moving to America, Jan’s mother became ill with cancer. Jan worked as a janitor while he was still a teenager, and he and his mother struggled to make ends meet with the help of food stamps and public housing.

Jan taught himself programming and worked for Ernst and Young and Yahoo. He got the idea for WhatsApp, a free telephone and messaging system, from his own experiences as a teenager, when he found it prohibitively expensive to call relatives. Jan teamed up with friends and fellow programmers and launched WhatsApp Inc. in 2009. The business’ first headquarters was the very building in Mountain View, California, where Jan used to go to collect his family’s food stamps.

The company hit many roadblocks. Jan and his partners persevered and ironed out many of the kinks in their business model. In 2014, Facebook bought WhatsApp for $19 billion. Since selling WhatsApp, Jan has founded The Koum Family Foundation, which gives grants to higher education, as well as to Jewish and Israeli charitable causes.

A Journey through Jewish Sicily
The Promise Of The Land
Which Chat Are You On?: Parshas Behar/Lag Ba’Omer
Do You Like Slow-Cooked Food? Thank the Jews
Comments
MOST POPULAR IN History
Our privacy policy