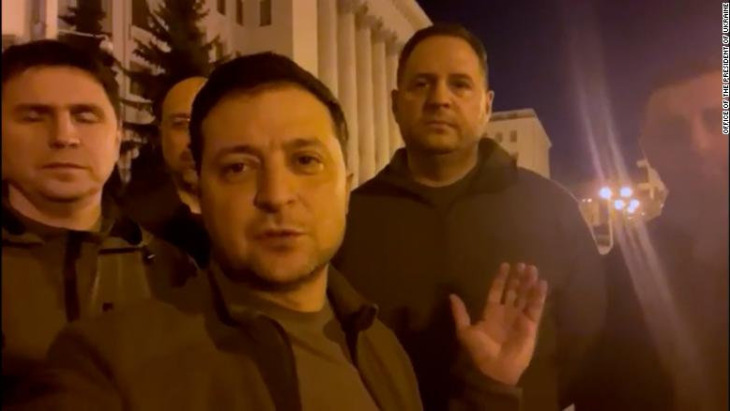 Ukraine’s youthful and unconventional Jewish president is inspiring his nation.

As the war in Ukraine continues, many people around the world are rallying around President Volodymyr Zelensky, Ukraine’s unconventional, Jewish, 44-year-old leader. Here are six facts about President Zelensky and the crisis in Ukraine today.

Volodymyr Zelensky was born January 25, 1978 in Kryvyi Rih, a city in eastern Ukraine. His family is Jewish and, like many Ukrainian Jews, was scarred by the Holocaust. (Zelensky has often drawn attention to the fact that approximately a quarter of all Jews murdered in the Holocaust came from Ukraine, a fact that’s not widely understood.)

During World War II, the town of Kryvyi Rih was occupied by Nazi Germany. It was home to a sizeable Jewish community, and in the years before the Nazi takeover of the town, many Jews fled eastward. Zelensky’s grandmother was one of the Jews who left. “My grandmother was living in Kryvyi Rih, in a part of south Ukraine which was occupied by the fascists,” Zelensky explained. “They killed all the Jews who remained. She had left in an evacuation of Jews to Almaty, Kazakhstan. Many people fled to there. She studied there. She’s a teacher. After World II, she came back. That’s where I was born.” 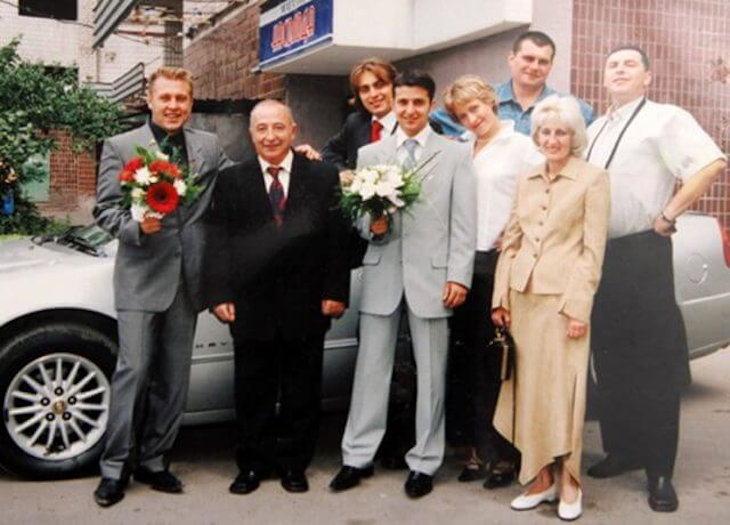 Zelensky with his parents

In 2020, when Zelensky travelled to Israel to mark the 75th anniversary of the liberation of Auschwitz, he told Israel’s then Prime Minister Benjamin Netanyahu stories about Ukraine during the Holocaust. Before he concluded, he said he had one more tale to tell, “about a family of four brothers”:

Three of them, their parents and their families became victims of the Holocaust. All of them were shot by German occupiers who invaded Ukraine. The fourth brother survived… Two years after the war, he had a son, and in 31 years, he had a grandson. In 40 more years, that grandson became president, and he is standing before you today, Mr. Prime Minister.

Zelensky describes his family as “an ordinary Soviet Jewish family.” He noted that since most instances of religious expression were banned in the Soviet Union, his family was not particularly observant., but they were aware of their Jewish heritage.

His family moved to Mongolia for a time while he was young, but returned in time for Zelensky to attend school in Kryvyi Rih. He grew up with Russian as his first language, and also speaks fluent Ukrainian and English.

In the early 1990s, after the demise of the Soviet Union, many Soviet Jews rushed to emigrate, moving to Israel or the United States. Approximately 1.5 million Jews fled in those heady years. Zelensky’s great aunt and her family moved to Israel in the 1990s, but he and his immediate family remained, joining several hundred thousand Jews who chose to stay in Ukraine and Russia. 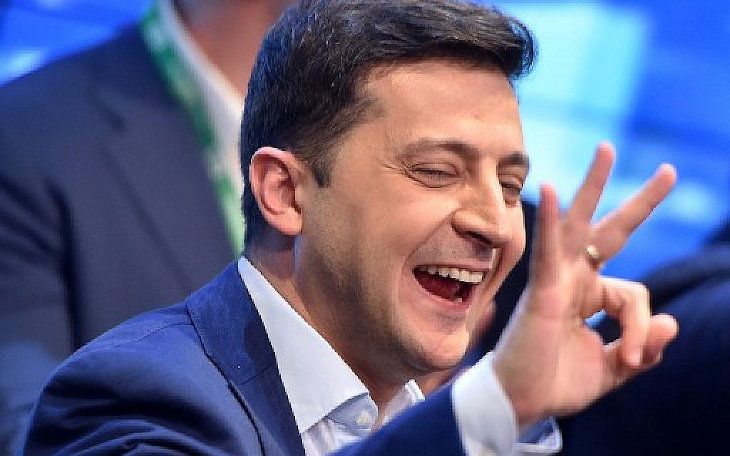 Zelensky attended the Kryvyi Rih Economic Institute, a branch of Kyiv National Economic University. He graduated in 2000 with a law degree. He met his wife, Olena Zelensky, a screenwriter and spokesperson for Ukrainian women’s rights, in college. (Olena Zelensky is not Jewish; Pres. Zelensky has not commented on unsubstantiated rumors that he converted to Christianity.) Their daughter Oleksandra was born in 2004 and their son Kyrylo was born in 2013.

3. Career as an Comic Actor

Zelensky never practiced law. He started acting in college and eventually founded his own production company called Kvartal 95 - “Neighborhood 95” - after the area in Kryvyi Rih where he grew up. He turned to comedy and became a hit throughout the former Soviet Union, performing stand up and acting in some comic films. In 2006, he won Ukraine’s “Strictly Come Dancing” television competition. He also performed in Israel. He told an Israeli newspaper he’d done shows in “Tel Aviv, in Beersheba, in Haifa, in Jerusalem. In so many cities. So I know Israel. I know people there.” 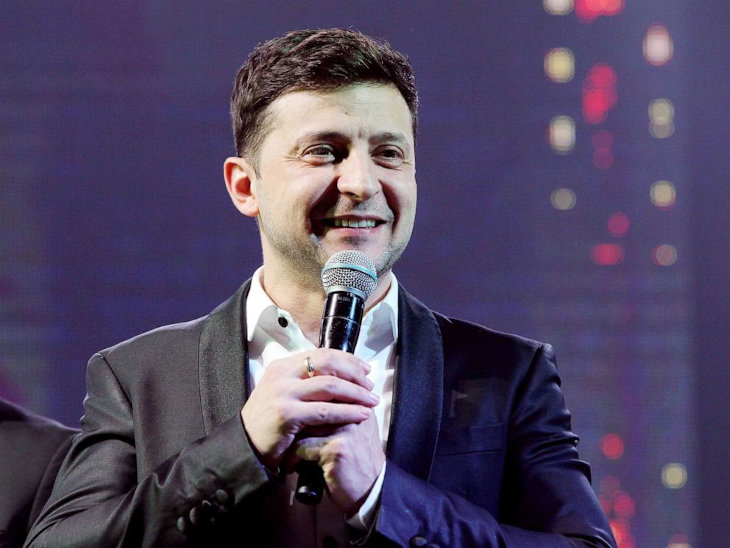 In 2015 Zelensky began starring in a Ukrainian television show Servant of the People. The year before, Ukraine’s unpopular President Viktor Yanukovych was forced out of office and Pres. Petro Poroshenko was elected instead. It was a tumultuous time in Ukrainian politics: Russia invaded and later annexed Ukraine’s Crimean Peninsula in 2014; Russian-backed insurgents battled Ukrainian forces in the republics of Donetsk and Luhansk in the east of the country; and endemic corruption sapped Ukrainian’s confidence in their government.

In Servant of the People, Zelensky played Vasiliy Goloborodko, a history teacher who shoots to fame after one of his students videos him railing against official corruption and becomes president. His character struck a chord with ordinary Ukrainians who longed for a plain-talking honest politician like Goloborodko.

After years of playing Pres. Goloborodko on television, Zelensky began to harbor political ambitions of his own. In 2018, he registered “Servant of the People” as an official political party.

Campaigning for the presidency, Zelensky relied on his comedy background, posting humorous speeches and skits on social media. His unusual campaigning style paid off: In Ukraine’s 2019 presidential election, Volodymyr Zelensky won an astonishing 73% of the vote.

His path to governing wasn’t always smooth. He faced some accusations of being close to corrupt figures and was accused of bringing in members of his TV production company as key political advisors. Within days, Russia declared a major provocation, extending Russian citizenship to people living in eastern Ukrainian regions controlled by separatist insurgents whom Russia was backing in Donetsk and Luhansk. 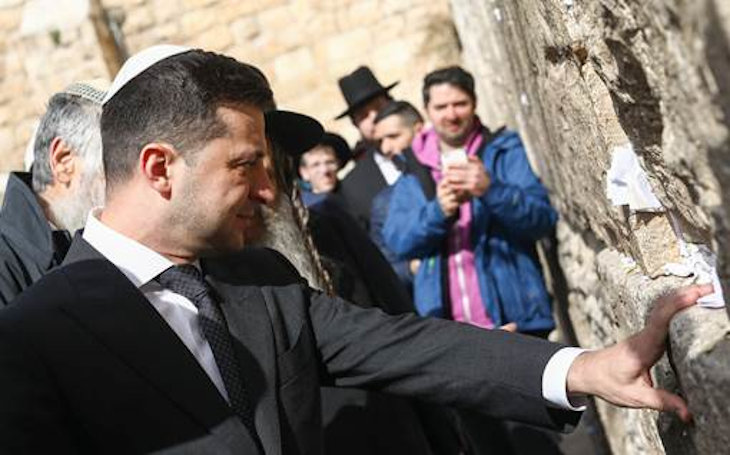 At the Western Wall

Zelensky responded to this major assault on Ukrainian territorial integrity with humor, posting on Facebook that he would extend Ukrainian citizenship to people in Russia and others “who suffer from authoritarian or corrupt regimes.”

When Zelensky ran for office, the Chief Rabbi of Dnipro said to the New York Times: “He should not run because we will have pogroms here again in two years if things go wrong.” Those fears proved misplaced. Instead, Zelensky was open about his Jewishness in office. He oversaw an ongoing project to rename streets and monuments throughout Ukraine, erasing the names of Soviet figures and replacing them with Ukrainian heroes, including Ukrainian Jews in some cases.

He began construction on a memorial at Babi Yar, the ravine outside Kyiv where Nazis murdered 100,000 Jews and other people. The Ukrainian city of Uman is the burial place of Rabbi Nachman of Breslov, and a major site for Jewish pilgrims to come and pray. Under Zelensky’s administration, plans are in the works to create what Zelensky called “a historical museum…a big part and…reconstruct(ion) of the synagogue” that Rabbi Nachman prayed in. The monument is to be called “Little Jerusalem”.

In the first hours of the Russian attack on Ukraine, President Zelensky vowed to remain in Kiyv, Ukraine’s capital. On a hastily recorded video made on a cellphone, he declared, “We are all here. Our soldiers are here. The citizens of our country are here…We are all here protecting our independence, our country, and it will continue to be this way. Glory to our defenders. Glory to our heroes. Glory to Ukraine.”

In the days since that first video, Zelensky has continued to urge Ukrainians to resist the Russian onslaught, and has rallied his people to resist. His anguished visage and stirring rhetoric has in many ways become the symbol of the war in Ukraine. He’s described himself as “Target Number One” and his wife and two children as “Target Number Two”. Despite the danger he’s in, Zelensky has vowed to stay and fight. 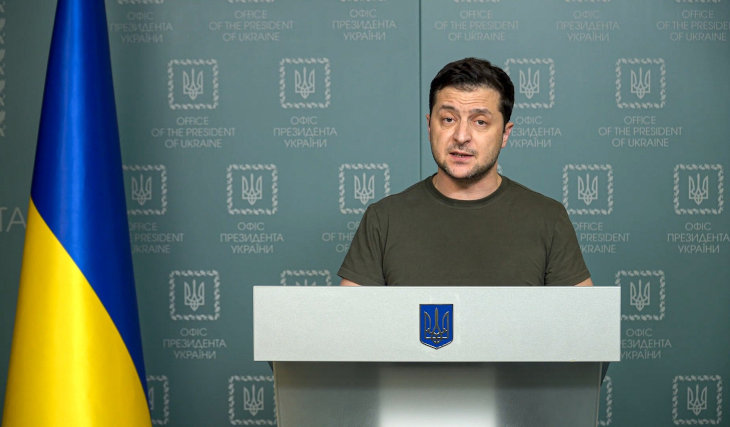 One political observer, Yulia McGuffie, editor in chief of Ukraine’s Novoye Vremya news site, opposed Pres. Zelensky’s candidacy in 2019, regarding him as a neophyte with no political experience. Today, Zelensky commands a 96% approval rating in Ukraine and Ms. McGuffie, like many Ukrainians, is enthusiastically backing their president. “Full support and respect came, I think, after Russia started its war,” she told the BBC. “All Ukrainians have closed ranks around Zelensky. He is playing a uniting and…inspiring role, partly by his own example. He is leading a government that is repelling Putin’s army, and for that many people sincerely admire and respect him.”

The Best Way to Stop Suicide

Coronating the King: 4 Ways to Prepare for Rosh Hashanah
For Every Individual, A Torah Scroll
Allegiance To The Monarch
Meet the Real You: Yom Kippur
Comments
MOST POPULAR IN Current Issues
Our privacy policy
Aish.com Is Looking for Great Writers