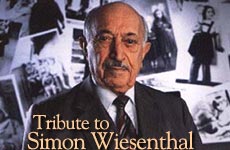 What is behind the man who brought 1,100 war criminals to justice?

Simon Wiesenthal, the 94-year-old famed Nazi hunter who tracked down Adolph Eichmann, is retiring. He was responsible for bringing over 1,100 war criminals to justice.

And then I read about Simon Wiesenthal's life and how he responded to these questions.

Survive the Holocaust? Three times he was inexplicably saved. He was in a line of Jews being shot one by one by Ukrainian when they stopped about 10 people away at the sound of church bells to take a break for Vespers. A non-Jewish friend pulled him out of line and saved him.

The second time he was in a line of Jews waiting to be shot to celebrate Hitler's birthday; another righteous non-Jew -- Heinrech Guenthert -- sent Adolph Kohlrautz to the concentration camp to demand the return of "his painter" needed to paint a swastika on a banner for the celebration.

The third time waiting to be shot, the S.S. decided that they needed to keep his group of 34 Jews alive so that the 200 S.S. men would be required to guard them rather than be sent to the Eastern Front to fight the Russians.

Wiesenthal's reaction? In the book “Justice Not Vengeance,” Peter Lingens writes of Wiesenthal's response to the question, "When hundreds of thousands were murdered, why was I allowed to live?" Writes Lingens, "He had not done anything that would justify his survival. By bringing the murderers to justice he believes he is performing a deed which in retrospect justifies his survival then."

How would the Holocaust impact a person? Simon Wiesenthal sought justice, not revenge. He refused to give information to revenge squads of former partisans who wanted to execute their tormentors. He spent hours convincing them that the answer to countering the bestiality of the Nazis is through strengthening society's effort towards law and justice. "Revenge killings cannot and must not be a way of administering justice. We differ from the Nazis precisely in that we accept the judgments of courts of law, even if we consider them monstrous or unjust."

Wiesenthal opened his Jewish Documentation Center in Vienna in 1947. For the next 50 years he listened to person after person tell the story of their torment. Never did he become inured to the pain; often he would break into tears during the conversations. He has compassion for people and always strives to help those in need of help. He worked with every channel possible to document the crimes against humanity, locate the perpetrators and bring them to justice.

Why do I admire Simon Wiesenthal? His decency, his vision, his commitment, his compassion. The Torah teaches, "Tzedek, tzedek tirdof" --"Righteousness, righteousness, you shall pursue" (Deut. 16:20). "What does the Almighty require of you, but to do justice, to love kindness and to walk humbly with your God" (Micah 6:8). These principles, these concepts were the foundation of his education; he took them to heart and lived according to them.

When someone asked why he chose to pursue the purveyors of evil and bring them to justice, Wiesenthal responded, "You believe in God and life after death. I also believe. When we come to the other world and meet the millions of Jews who died in the camps and they ask us, 'What have you done?', there will be many answers. You will say, 'I became a jeweler.' Another will say, I have smuggled coffee and American cigarettes.' Another will say, 'I built houses.' But I will say, 'I didn't forget you’."

Between 1992 and 2019, Rabbi Packouz, obm was the author of Shabbat Shalom Weekly, with insights into life, personal growth and Torah. He transitioned from a Reform Judaism background to a fully Torah-observant life at age 22, via Aish HaTorah, where he was one of the founding five students. He was co-founder of Aish HaTorah’s first branch, in St. Louis, Missouri and the originator of the Aish Jewish Computer Dating Service – perhaps the first Jewish computer dating service. He is also the creator of TheWall.org – a webcam on the Western Wall. The Shabbat Shalom Weekly started with 50 faxes and 50 emails. Today, it has over 100,000 subscribers and is available in English, Hebrew, Spanish and Portuguese. To subscribe, go to www.shabbatshalom.org and enter your email address.