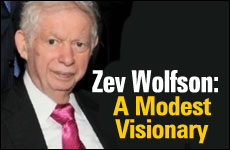 Without fanfare, Mr. Wolfson took responsibility for the physical and spiritual survival of the Jewish People.

Last week the Jewish people lost Mr. Zev Wolfson zt”l, the largest Jewish philanthropist for Jewish education and outreach of our generation. Mr. Wolfson passed away on Monday in New York City at the age of 84.

After Mr. Wolfson’s passing, former Israeli Interior Minister Aryeh Deri recalled that the late Israeli Prime Minister Yitzchak Rabin told him that “there isn’t another Jew in the entire world who singlehandedly did so much for Am Yisrael and the State of Israel as Zev Wolfson.” (source: HaModia newspaper)

Mr. Wolfson was born into humble conditions in Vilna, Lithuania in the late 20’s. His father passed way when he was a young child, leaving him alone with his mother and younger brother. As the Holocaust engulfed Europe, the Soviets deported Zev and his family to Siberia, allowing them to survive the war. Soon after he made his way to the United States, where he quickly succeeded in business, soon creating a successful real estate firm and Wall Street hedge fund. He became the “American success story.” But to Zev Wolfson, enjoying his financial success was not what life was about.

In his 20’s, Zev met Rabbi Aharon Kotler. Rabbi Kotler, also from Lithuania, was rescued from the Holocaust and had settled in Lakewood, New Jersey, determined to rebuild Jewry and Torah learning in America. Most people felt Rabbi Kotler was a “dreamer” and was not being realistic in thinking he could recreate European Jewry in the materialistic and superficial United States. But Zev Wolfson, already a successful businessman, was inspired by Rabbi Kotler’s vision and became one of his greatest partners and supporters in building not only an elite Yeshiva in Lakewood, but also spreading Torah learning across America.

Zev Wolfson quickly became a visionary who viewed himself as being responsible for the physical and spiritual survival of the Jewish People. While he was a tremendously humble man, he also had supreme confidence that he could make a giant difference in the world. At his funeral, one of his sons noted that he would often say, “Anyone can do what I do, but I do it.”

Zev Wolfson used his wealth and power to fight for the survival and safety of the State of Israel. During the Yom Kippur War in 1973, Prime Minister Golda Meir sent desperate requests to Washington for much needed supplies. Mr. Wolfson, through his powerful contacts on Capital Hill, helped put enormous pressure on President Nixon and Secretary of State Henry Kissinger to support Israel. America came through, sending more than 22,000 tons of supplies to Israel.

Deri was quoted this week as saying “Before there was AIPAC, Wolfson was the most powerful Jew in Congress, and he used all his influence solely to help his fellow Jews.”

But above all, Mr. Wolfson’s mark in this world became his unparalleled support for Jewish education and outreach. Virtually every major Torah outreach organization and program in the world was either created or supported by Wolfson. Though he himself never received a formal Jewish education, literally hundreds of thousands (and possibly millions) of Jews were introduced to Judaism for the first time because Mr. Wolfson’s vision and sense of responsibility. Organizations were created and supported in Israel, North America, South America, Europe and the former Soviet Union. Mr. Wolfson even created a Torah learning organization in Iran during the regime of the Shah.

Mr. Wolfson was always looking for new and bigger ways to help the Jewish People. About five years ago I was meeting with Zev’s son Aaron in their New York City office. Aaron brought me in to briefly introduce me to his father. At this stage in his life, Zev was significantly slowed physically by various illnesses. Within five seconds of sitting down across from him, Zev looked at me and asked, “What would you do with $10 million to help the Jewish People?” The crazy thing is that he was dead serious. He wasn’t just making conversation – he honestly was thinking that big and wasn’t satisfied with the already unparalleled impact he had made.

Mr. Wolfson’s modesty was also legendary. His family noted that he regularly met with Presidents and Prime Ministers. He had helped create and was financially supporting hundreds of Jewish organizations. Yet his name was almost never mentioned in the press. His name was not seen on buildings and institutions. Amongst other major Jewish philanthropists and foundations, he rarely entered the discussion.

Because Zev Wolfson understood that he was blessed with financial means in order to use his money to help the Jewish People, he lived modestly, without any ostentation.

The Jewish people will miss the legendary Zev Wolfson, and may his family be comforted amongst the mourners of Zion.

97-Year-Old Holocaust Survivor is a Viral Sensation on TikTok
The Blue Beyond
Great Place to Live
Is Eating Supposed To Be Spiritual?
Comments
MOST POPULAR IN Israel
Our privacy policy