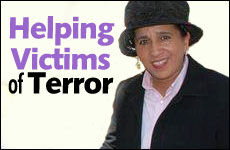 Saturday night in Jerusalem, March 2, 2002, Liora Tedgi became a victim of terror. A bomb placed by an Arab ripped into the hundreds of Jews returning from Sabbath services. Eleven Jews were killed, 51 injured. Liora, pregnant with twins, lost both in the attack. Here in the Middle East, chutzpah can be directed even at God. “You give me another set of twins, God,” tiny Liora said, striking a hard bargain, “and I’ll take care of your victims.” 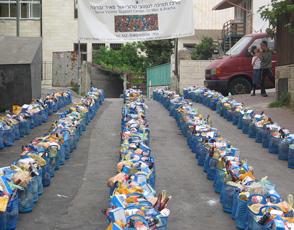 Apparently the Almighty accepted her deal. Since its establishment in 2002, Ohr Meir U’Bracha, Liora’s non-profit Terror Victim’s Fund has distributed thousands of weekly food baskets to suffering families, providing psychological and legal aid, winter clothes and school supplies, baby formula and diapers, electrical appliances, and a kitchen package for brides. There is a Kids’ Corner providing after-school hot meals and aid with homework, and a big brother/sister mentoring program. There are day-trips to the zoo, moonwalks and carnivals. And before heading to the office each morning, Liora walks her twin daughters, conceived shortly after losing her first set, with identical long braids and blue school uniforms to their school.

Terror's raw taste is not new to the Tedgi family. Liora's father-in-law was wounded by a bomb left at a bus station on the way to pray at the grave of a fourth-century sage. His brother was stabbed by an Arab while on duty as a policeman, to the horror of his own Arab friends. Liora's great-uncle Matityahu was fired upon by Arab snipers as he was stranded in a doomed convoy bringing food to a besieged Jerusalem in 1948. His brother, Grandpa David, carried the 23-year old on his back to Shaare Tzedek hospital, and suffered a heart attack there as Matityahu died. 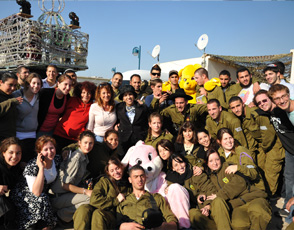 In Liora's book of life, altruism calls to those who have suffered. It's the frayed soul that feels the hole in another. "The victims of terror are not only the ones who die," says Liora. "Children are orphaned, parents are disabled and cannot provide for their remaining family.” Her eyes are weary, but the flower on her trademark black hat bobs up at the world. There's a steel determination in her stance coupled with a genuine outpouring of love. As she walks past her neighbors or through a roomful of orphans, a steady flow of blessings comes forth upon whomever she meets. "You should have happiness, peace, good children... but most of all a happy heart."

"What can a kid do in a hospital?" he asked. "Everything you can't,” young Liora replied.

"I was there too," Liora says. Not only in terror, but in the poverty that stalks many of its broken victims. "As a child, we got food from aid organizations. We didn't know the word spoiled. Complaining was not in our universe. When I was a child I decided that I would give food to people in a dignified manner when I grow up." At 12, Liora jutted out her chin at the director of Shaare Tzedek Hospital and insisted she wanted to volunteer there after school. "What can a kid do in a hospital?" he asked. "Everything you can't,” young Liora replied. He pulled out a white apron with the word “volunteer” embroidered on the chest, and she began distributing food every day after school.

What separates the hurt and bitter person from the hurt and helpful? "I grew up with this. When we had a bit more food, my father designated an old wagon his ‘Fiat.’ That was for delivering food to people relatively close to our home. The sturdier wagon was his ‘Mercedes,’ which went longer distances to feed people more hungry than us." When Liora’s father died, puzzled families suddenly found themselves denied credit in the local grocery. Only with his demise did these families - and his own - discover he’d been paying their bills for years. 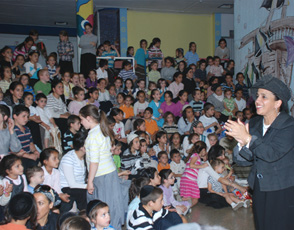 Hebrew differentiates between the word “hesed,” loosely translated as loving kindness, and “rahamim” which is mercy. “Rahamim” is a compassion awakened by an external source; the beggar attracts my attention or makes me uncomfortable, so I give. Were he not sprawled with a cup in my path, that money would remain in my pocket. “Hesed” on the other hand, is an expansiveness rooted inside. I give because I need to be a giving person. This is how I feel whole. If the beggar’s not here today, I’ll go look for him. Liora is driven by “hesed.” Inaction, or egoism, leaves her bewildered.

Her greatest giving is allowing others to share the thrill. Neighbors are invited – repeatedly and graciously – to get into the food-packing party each Thursday. A carnival for victims is extended to the neighborhood children; we all eat cotton candy together. Bar and Bat Mitzvah missions from around the world spend a day volunteering with the Terror Victim’s Fund, injecting additional meaning to their trip to Israel.

Liora’s organization receives no funding from the government; she is the queen of her staff of volunteers. She does respond to desperate mayors and municipalities, begging her to bring their town’s children out of sweltering bomb shelters to Jerusalem for a day of wholesome fun. “It’s good they call,“ she says, “because we can help more people. On the other hand, it’s more money we don’t have.” This summer, she’s scrambling for funds to take bomb-wary children to the Biblical Zoo, to jump on moonwalks and laugh at a clown.

Does all the pressure make Liora weary? “As long as God gave me another day – that’s a gift, and I must be happy. It’s an opportunity to help one more person. There’s a lot to do.”

We Will Remember
Bechukotai 5782: Divine Retribution
Behar 5782: Working to Live or Living to Work?
The Wholeness of Being Broken
Comments
MOST POPULAR IN Israel Diary
Our privacy policy