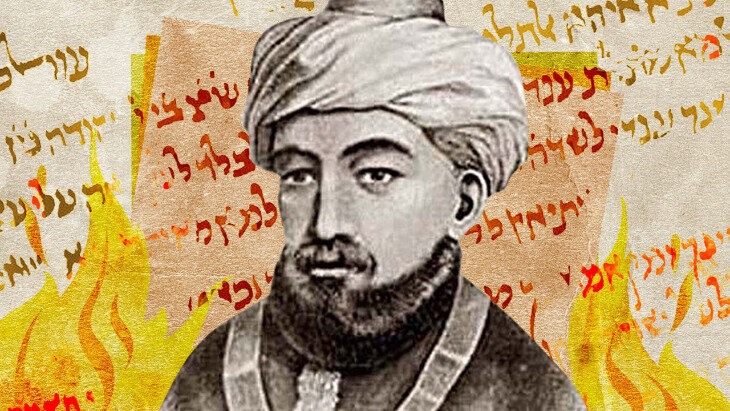 Why did a group of Dominican monks, in Paris, 1233, set fire to a pile of the philosophical works of Maimonides?

On a somber day in 1233, in a public square in Paris, a group of Dominican monks set fire to a huge pile of the philosophical works of Maimonides, the leading rabbi of his generation. According to some historical sources, a number of Jewish followers of the rabbis who opposed Maimonides accused him of heretical views, denounced his works to the Dominicans and demanded they be consigned to the flames. The Dominicans were only too pleased to accommodate them.

The conflagration sent shock waves through the Jewish communities of Medieval Europe and brought an end to a controversy that threatened to tear the rabbinate apart. But not entirely. Although the Guide for the Perplexed, the magnum opus of Maimonides’ philosophical works, is universally accepted as a central pillar of the Jewish scholarship, some circles still view it with suspicion and fear.

Who was Maimonides? What was his role in Jewish history and scholarship? Why did the views he expressed in the Guide spark so much incendiary controversy? Why were his opponents so frightened that they enlisted the help of the Christian authorities in an internal Jewish dispute?

Rabbi Moshe ben Maimon, known to history as Maimonides, was no stranger to controversy. He was born in 1135 in Cordoba, Spain, during the time when rival Muslim caliphates competed for power in Spain. In 1148, the fanatical Almohads conquered Cordoba and threatened to convert its Jews forcibly. The Maimon family fled and moved from city to city until they arrived in Fez, Morocco. In 1166, the family arrived in Egypt and settled in Fostat, the Jewish suburb of Cairo.

During this nomadic period of his life, despite the upheavals, dangers and hardships, Maimonides completed his Commentary on the sixty tractates of the Mishnah, the core element of the Talmud. The work was an incredible display of genius and scholarship that immediately elevated its author to the highest echelons of the rabbinate.

The first controversy came 15 years later. At the age of 45, Maimonides authored the magisterial Mishneh Torah, the first formal codification of Jewish law written in beautiful, clear, concise and easy-to-understand Hebrew. It was a work of art and science that rocked the rabbinate. Moreover, with fears of it affecting their livelihood, some of the less illustrious rabbis of the time responded with furious opposition and condemnation.

Some were concerned that it simplified and watered down the complex, interlocking tapestry of the authoritative Talmud. Until that point, questions of law and custom presented to rabbis were adjudicated solely by reference to the Talmud, the grand depository of all Jewish law. But the Talmud is not the kind of law book to which we are accustomed, in which all the laws are arranged in a series of articles and sub-articles. Rather, the Talmud is a voluminous transcript of wide-ranging and often contentious debates among the Sages of the first millennium of the modern area. The debates veer off into numerous tangents, and debates that begin in one tractate often reappear in other tractate with other proofs and arguments. The debates are rarely resolved in the two thousand pages of the Talmud, leaving it to later generations to derive the law as it should be applied to practical cases.

Consequently, in order for a rabbi to issue a ruling he needed great skill and experience in navigating the highways and byways of the Talmud. Ordinary people had no recourse to books that would give them guidance regarding issues that arose in daily life. Their only choice was to consult rabbinic experts who formulated their particular interpretations of the issues and issued rulings based on their personal conclusions. Most of these rabbis supported themselves and their families by the fees they collected for their services.

Maimonides felt there was an urgent need for a uniform set of laws that all rabbis would apply in their rabbinic courtrooms, and based on his encyclopedic knowledge of the Talmud, he provided just such a code. Furthermore, he believed that rabbis should not charge fees for their services but should seek trades by which to support their families while they studied the Torah. Maimonides himself earned a living as a physician and eventually became the personal physician to the royal family in Cairo.

His opponents raised numerous objections to his code. They claimed that people would stop studying the Talmud because they would find no need for it. They also complained that Maimonides had not given sources for his rulings.

The storm raged for a short while, and then it subsided. The Mishneh Torah became one of the pillars of Jewish learning, which it remains to this very day. But the resentment this work had triggered continued to simmer under the surface, and ten years later, it burst forth in a blaze of rage.

Guide for the Perplexed Controversy

In 1190, Maimonides published his Guide for the Perplexed, a work of Jewish theology that aimed to forge a synthesis between the traditions of the Torah and the principles of Aristotelean philosophy and thereby place Judaism on a firm footing of rationalism and science. The Arabs had translated the works of the ancient Greeks into Arabic, and young Jewish intellectuals were drawn to them. Maimonides wrote his book to demonstrate that faith and reason were not contradictory.

In the book, Maimonides accepted Aristotle’s propositions. A good part of the book, however, is devoted to a vehement refutation of Aristotle’s claim that the world always existed. There can be only two possibilities, either the world always existed, or it was created ex nihilo by a God in the Jewish conception. Maimonides demonstrates that the second option is much more rational than the first.

The book is magnificent in its scope and originality. It presents a brilliant system of Jewish theology such as had never been previously formulated. It addresses all anthropomorphic references to God, such as laughing, flying, sitting, having hands and feet and so forth, that might be construed as corporeality, and it explains each one as a metaphor for one or another of God’s actions. It discusses prophecy, divine providence and the underlying reasons for all the commandments. In its totality, it defends and elucidates the basic tenets of Jewish theology, but the author’s detractors found much fault with it.

The Jewish communities in medieval times were insular, as was the broader Christian community. They had a great fear of Greek philosophy, believing that it would lead to heresy. They were leery of the fine line Maimonides had drawn and did not believe that his readers would stay on the right side of it. They also took exception with some of the author’s Torah interpretations they considered radical.

Maimonides limited the reliance on the supernatural to explain natural phenomena, whereas others saw miracles everywhere. Maimonides interpreted many episodes in the Torah, such as Balaam’s talking donkey, as taking place in prophetic visions rather than in real life. Maimonides believed there were limits to divine providence, allowing for strands of randomness in the world. Moreover, Maimonides failed to write about the physical resurrection of the dead, an omission he corrected in one of his later epistles.

Some firebrands denounced the book to the Dominican monks and it was consigned to the flames. The shock of this incredible event brought the rabbinate to its senses.

The controversy raged in the rabbinate for decades after Maimonides passed away, with many rabbis condemning the book and many others coming to its defense. Adding injury to insult, two very prominent rabbis issued a cherem – a ban – on the book, a shocking development considering that Maimonides was universally acknowledged as the greatest rabbi of his generation. Seismic tremors rippled through the Jewish community. Numerous hotheads emerged on both sides of the dispute and stirred the cauldron of dissension. Finally, some of these firebrands denounced the book to the Dominican monks, and it was consigned to the flames.

The shock of this incredible event brought the rabbinate to its senses. The rabbis who had issued the bans retracted them and publicly repented, and the book was widely embraced and quoted as one of the most important expositions of Jewish theology ever written. A shameful episode in Jewish history came to an end.

It is unlikely that the book posed a serious threat to the faith of the average Jews of the time, since it can only be penetrated after long and painstaking study. Although the other works of Maimonides are written in a clear and beautiful style, the Guide is written in an entirely different style, convoluted and almost opaque, most probably resembling the style of Muslim philosophers against whom it competed.

Furthermore, there is very little in the book that could be considered even a tiny window to heresy, but the very idea of giving validity to Greek philosophers caused consternation in the insular communities. Even today, there is some residual reluctance to study the book and approach Judaism from the perspective of rationalism rather than simple faith.

Most Jewish people in today’s age of almost unlimited access to information, however, are open to the combination of faith and reason with the understanding that the synthesis strengthens both.

Rabbi Reinman is author of the recently published A Guide to the Guide: A Chapter-by-Chapter Summary of the Guide for the Perplexed (Amazon), in which he summarizes the thoughts of Maimonides in modern, easy-to-understand English. Click here to order.

Rabbi Reinman is an internationally famous Talmudist, historian and novelist. His works on the philosophy of Talmudic civil law are studied at the highest levels of yeshivos all over the world. He is also the author, under the pseudonym Avner Gold, of the wildly popular Strasbourg Saga, a twelve-volume series of historical novels set in the seventeenth century. He gives weekly online Chumash classes, which are available on Torah Anytime and YouTube. He resides with his wife in Lakewood, New Jersey.