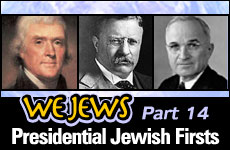 In honor of President’s Day, We Jews honor American presidents and their famous Jewish firsts.

From colonial times, We Jews have played a vital, if sometimes unsung role in the lives and administrations of our Chiefs. Many actively supported the Revolutionary War and settled new territories during America's westward expansion. In the more recent past, Jews such as Henry Kissinger, Elliott Abrams, and Ari Fleischer have become household names. Just recently Jacob Lew, an Orthodox Jew, was appointed White House chief of staff.

Various Presidents helped move us forward in their administrations which benefited both our country, and countless others. Here is a sampling of …

*George Washington (1789-97): First to visit a synagogue, Touro, in Newport. Washington also wrote: “May the children of the stock of Abraham who dwell in this land continue to enjoy the good will of the other inhabitants; while everyone shall sit in safety under his own vine and fig tree and there shall be none to make him afraid.” It should also be noted that Polish-born Jew, Haym Salomon was a major force during the Revolution as a secret agent in British-occupied New York. More, his financial skills helped rescue the Continental government. A member of Mikveh Israel Congregation, he made the largest contribution toward its first building in 1782. In Chicago there’s a statue linking Washington, Salomon and Robert Morris, with the words "...The government of the United States which gives to bigotry no sanction to persecution no assistance."

*Thomas Jefferson (1801-09): First to propose religious freedom for Jews in his 1779 Bill for Establishing Religious Freedom in Virginia (adopted in 1785). He also appointed the first Jew, Reuben Etting, to a Federal post: U.S. Marshall for Maryland (1801).

*James Madison (1809-1817): First to appoint a Jew, the irrepressible Mordecai Manuel Noah, as Consul to the Barbary pirates of Tunisia (1813) to negotiate the release of imprisoned Americans. Madison recalled him, with the smear of anti-Semitism wafting around the recall. He was later exonerated, but Noah grew passionate about a Jewish homeland which he tried to create near Buffalo, calling it Ararat.

*Martin Van Buren (1837-41): First to order an American consul to intervene on behalf of Jews abroad. In 1840, he instructed the U.S. consul in Alexandria, Egypt to protect the Jews of Damascus who were under attack because of a false blood ritual accusation.

*Franklin Pierce (1853-7): First whose name appears on the charter of a synagogue. Pierce signed the Act of Congress in 1857 that amended the laws of Washington D.C. to enable the city's first synagogue, the Washington Hebrew Congregation, to incorporate.

*Rutherford B. Hayes (1877-81): First to designate a Jewish ambassador for the purpose of fighting anti-Semitism. In 1870, he named Benjamin Peixotto Consul-General to Romania. Hayes also ordered the employment of a Jewish woman who had been denied a position in the Department of the Interior because of her refusal to work on Shabbat.

*Theodore Roosevelt (1901-09): First to appoint a Jew to the cabinet, Oscar S. Straus (Secretary of Commerce and Labor ,1906). In 1919, when Roosevelt received the Nobel Peace Prize for his efforts while President to settle the Russo-Japanese War, “Teddy” donated part of his prize to the National Jewish Welfare Board.

*William Howard Taft (1909-13): First to attend a Seder while in office (1912) as a guest of Colonel Harry Cutler, first president of the National Jewish Welfare Board. The Seder was held at the Cutler family home on Glenham Street in Rhode Island.

“Here is a great body of our Jewish Citizens from whom have sprung men of genius in every walk of our varied life; men who have .... led enterprises with spirit and sagacity ... They are not Jews in America, they are American citizens.” -- Woodrow Wilson

Warren Harding (1921-23): First to sign a Joint Congressional Resolution endorsing the Balfour Declaration and the Palestine Mandate supporting the establishment in Palestine of a national Jewish home for the Jewish people. The resolution was signed September 22, 1922.

Calvin Coolidge (1923-29): First to participate in the dedication of a Jewish community institution (May 3, 1925): the Washington, D.C. Jewish Community center.

Franklin D. Roosevelt (1993-45): First to be given a Torah as a gift -- a miniature Torah from Young Israel and another that had been rescued from a burning synagogue in Czechoslovakia. However, his administration's failure to expand the existing refugee quota has caused many to argue over Roosevelt's response to the Holocaust.

Harry S. Truman (1945-53): On May 14, 1948, just 11 minutes after Israel's proclamation of independence, he was the first head of a government to recognize Israel. He also received Israel’s President, Chaim Weizman, and Israeli Ambassador Eliahu Elat in 1948. More, Truman obtained $140 million from Congress to help Israel manage the mass immigration to the tiny country in 1951-52.

Dwight D. Eisenhower (1953-61): First to participate in a national TV program sponsored by a Jewish organization in 1954 to celebrate the 300th anniversary of the American Jewish community.

“I grew up believing that the Jews are the chosen people, that they gave us the high ethical and moral principles of our civilization.” -- Eisenhower

John F. Kennedy (1961-3): Despite his father’s notorious anti-Semitism, JFK named two Jews to his cabinet: Abraham Ribicoff as Secretary of Health, Education and Welfare, and Arthur Goldberg as Secretary of Labor. He also approved the sale of defensive U.S. weapons to Israel. The annual peace award of the Synagogue Council of America was re-named the John F. Kennedy Peace Award after his assassination in 1963.

Lyndon B. Johnson (1963-69): Only recently has the full extent of LBJ’s personal and often emotional connection to Jews and Israel been revealed from his early years through his Presidency. While he was in office, the U.S. became Israel's chief diplomatic ally and primary arms supplier. But more, while a congressman in the late 1930s, he supplied visas and false passports to Jews in Eastern Europe – an illegal act which could have sent LBJ to jail. It’s estimated that his actions saved 400 Eastern European Jews, including musician/conductor Erich Leinsdorf. During World War II Johnson raised a substantial sum for arms for Jewish underground fighters in Palestine. U.N. Resolution 242 in November 1967 that called for “secure and recognized” boundaries after the Six-Day War was crafted during Johnson's watch. When Soviet premier Aleksei Kosygin asked Johnson why the U.S. supported Israel when there were 80 million Arabs and only three million Israelis, the straight-talking Texan simply said: "Because it is right."

Jimmy Carter (1977-81): stated his concern for human rights and stressed the right of Russian Jews to emigrate. He is credited with negotiating the Camp David Accords. Carter, however, has angered American Jews by likening Israeli policy in the West Bank to apartheid South Africa in his book "Palestine: Peace Not Apartheid." Though he apologized in 2009, fences haven’t been completely mended.

George H.W. Bush (1989-93): in 1985 as Vice President played a personal role in 'Operation Joshua,' the airlift which brought 10,000 Jews out of Ethiopia directly to resettlement in Israel. Then, again in 1991, as President, the U.S. played a critical role in 'Operation Solomon' which secured the escape of 14,000 Ethiopian Jews. Most dramatically, Bush insisted the U.N. revoke its 1975 'Zionism is Racism' resolution.

Bill Clinton (1993-2001): appointed more Jews to his cabinet than all of the previous presidents combined, and nominated Ruth Bader Ginsburg and Stephen Breyer to the Supreme Court.

George W. Bush (2001-09): “ NOW, THEREFORE, I, GEORGE W. BUSH, President of the United States of America … do hereby proclaim April 22 through 29, 2001, as Jewish Heritage Week.” “W” had a warm relationship with the Jewish people and the State of Israel as did many of his presidential forbearers.

Finally, no discussion of Jews and Presidents would be complete without noting Bernard Baruch. Born on August 18 in 1870, he became not only one of the great American financiers, but also close confidante and adviser to nine Presidents, from Woodrow Wilson to Lyndon Johnson. America’s “unofficial president” came from an exceptional family. His father, Dr. Simon Baruch, was a pioneer in hydrotherapy and appendectomies. Despite heavy responsibilities, Baruch refused to work on Yom Kippur. On June 14, 1946, he authored the official U.S. policy on international control of atomic energy presented at the United Nations.

The Mensch from Manhattan
The Blue Beyond
Great Place to Live
Is Eating Supposed To Be Spiritual?
Comments
MOST POPULAR IN Jewlarious
Our privacy policy