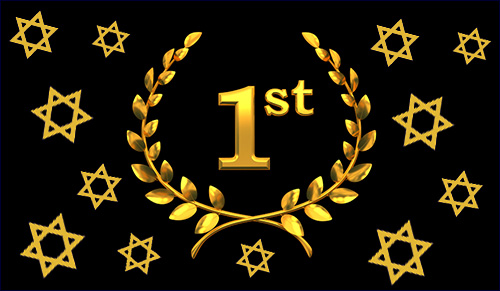 We Jews came, we saw, we did. Throughout our remarkable history, most of us know we’ve given the world gifts way beyond our numbers in the form of medical breakthroughs, science, literature, entertainment, and inventions. Einstein, Baruch, Louis B. Meyer, Jonas Salk, Albert Sabin, Levi Strauss, Sigmund Freud, Edwin Land! Great names all. They got there/did that, first. Then they named it, and claimed it.

Then there’s another kind of first. The first Jew “who!” Not only did these Jews excel, despite prejudice, wandering, running, they managed to “break through” and become the first Jew to be recognized by the public for his/her contribution.

Lionel Nathan Rothschild was the first Jewish member of the British House of Commons.

Lionel Nathan Rothschild (1808-1879), son of Nathan Mayer and grandson of German financier Mayer Amschel Rothschild (1743-1812), became the first Jewish member of the British House of Commons. Yet, despite his election several times, he did not assume his seat for 11 years until Parliament let him take the oath in a manner acceptable to the Jewish faith. Finally, in 1858, with head covered according to Jewish ritual, he took the oath on the Hebrew Bible! Lionel lived to see his son, Sir Nathan Mayer, the 1st Baron Rothschild (1840-1915), also a Member of Parliament become the first Jewish peer in Britain in 1855.

He Blamed The Large Corporations For Being Morally "Abnormal And Lawless"; And "Men ... Who Had Been Blinded By Privilege."

Remarks in a recent paper? Hardly. They were made by Louis Dembitz Brandeis about the harrowing experience preceding his confirmation on June 1, 1916 to the Supreme Court – the first Jew to do be so honored. Withstanding great pressure, President Wilson stood behind Brandeis against thinly veiled anti-Semitism. The appointment made way for Jews to serve in high positions in government. Brandeis became a legendary advocate for social justice and remains a hero to Jews for his commitment to Jewish and Western values.

He was the second graduate of West Point – and the first Jew. Baltimore’s Simon Magruder Levy was a hero in the Indian Wars at Maumee Rapids, Ohio (1794). He was a sergeant in the 4th Infantry (1793 to 1801) and arrived at West Point on March 2, 1801. Following graduation on October 12, 1802, he performed administrative functions at the Point until his transfer to Fort Wilkinson, Georgia, as Assistant Engineer.

This Land Is Made For You and Me: The Jewish Paul Revere of the South ...

"First Jew In South Carolina To Hold Public Office And To Die For American Independence” ... opens the inscription on a commemorative stone in honor of Francis Salvador, erected at the time of the bicentennial celebration of the Jewish community of Charleston, 1950.

Salvador came to Charleston (Charles Town) from his native London in 1773, and served with distinction in the creation of his state and his new nation. In 1774, he was the first Jew elected to public office as delegate to the first South Carolina Provincial Congress. A patriot, participating as a volunteer in an expedition against Indians and Tories, he was killed in an ambush near the Keowee River in 1776, thus also becoming the first Jew to give his life in the Revolutionary War. Salvador’s commander described his death to South Carolina President, John Rutledge. With a savage head wound, he asked whether the enemy had been beaten. He was glad ... and then said farewell. Such a large number of Southern Jews wanted to join the Revolutionary cause, Captain Richard Lushington of Charleston formed what was known as “the Jews’ Company.”

On January 24, 1656, Dr. Jacob Lumbrozo, a Portuguese physician arrived in Maryland, two years after the first Jews settled in New Amsterdam. Not only was he the first Jewish doctor to permanently settle in the New World, but the first Jew to reside in Maryland. Known as “Ye Jew doctor,” he was a country squire, until, in 1658, he was arrested in the Catholic colony. Saved by the 1659 general amnesty declared by Richard Cromwell, Dr. Lumbrozo remained in Maryland, securing land and civil rights.

The daughter of German and American Jews, neither of whom completed high school, Rosalyn, born in the Bronx in 1921, received her degree from Hunter College in physics and chemistry. Rejected from Purdue’s graduate program due to gender and religion, she got her Ph.D. in nuclear physics (1945) from the University of Illinois, becoming the first woman in their College of Engineering. At the VA Hospital in 1947, she and partner Dr. Solomon A. Berson created radioimmunoassay (RIA), allowing doctors to diagnose conditions caused by minute changes in hormone levels, useful in diabetes, screening for hepatitis in blood banks, determining effective dosages of antibiotics, and more in the field of endocrinology. Among her many honors, she was the first American woman to win the Nobel Prize in Medicine and Physiology in 1977. The Prize was one of many. Dr. Yalow, cooked kosher meals at home and never lost her passion for both career and family.

Hebrew Grammar Book: Published, 1735 in Boston for use at Harvard College

Is the Joker Jewish?
The Softball Player
How This 6 Generation Bread Baker Brought Back Israel’s Ancient Grains
Olivia Newton John’s Grandfather was a Nobel-Prize Winning Jewish Physicist
Comments
MOST POPULAR IN Jewlarious
Our privacy policy
Aish.com Is Looking for Great Writers