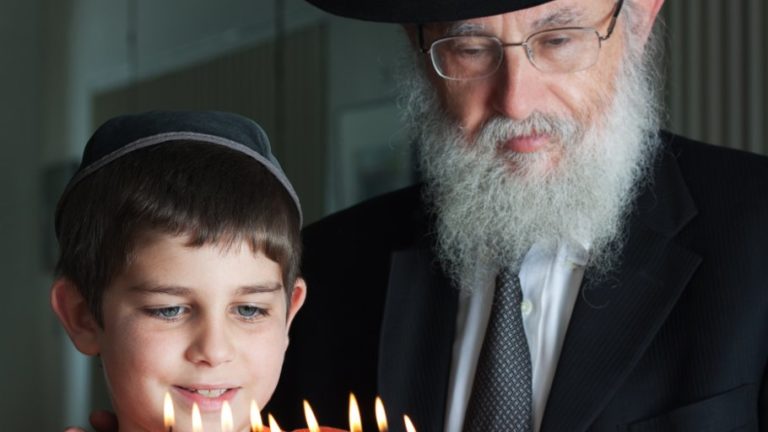 To remind us how much we love them.

Sure we love our Bubbies, but don’t forget we love our Zadies too (or Sabbas or Pappas or fill in the blank)! How do we know? If Jews tell jokes about something, it means there’s love there, so here are ten jokes about Zadies to remind us how much we love them.

It was Benny's third birthday party and he was having a lovely time. Soon it was time to open his presents. His favorite was from his Zadie Marvin – a water gun. He jumped up and down with delight and then ran to the nearest sink to fill it up.

But his mother was not so pleased. She turned to Zadie Marvin and said, "I'm surprised at you, Dad. Don't you remember how we used to drive you crazy with water guns when we were young?"

Zadie Marvin smiled and replied, "I remember. Oiy do I remember!"

Little Moishie Epstein was sleeping away from home for the first time – sleeping at his Bubbie and Zadie's.

Little Moishie and Zadie got ready for bed at the same time. Moishie brushed his teeth, and then Zadie brushed her dentures. Moishie was fascinated by the site of his Zadie cleaning her dentures. He sat riveted as she carefully took them out, brushed and rinsed them, and then popped them back in.

At his 103rd birthday party, the Rubenstein family gathered around Zadie Hymie for cake and words of wisdom.

“So Zadie,” asked little Stevie inappropriately, “Are you going to be around for your 104th Birthday party”?

"I certainly will," Zadie replied.

“How can you be so sure?” Stevie asked.

“Well,” Zadie replied, “Statistics show that very few people die between the ages of 103 and 104."

Mendy and Mushkie were Chabad emissaries in Okinawa, Japan, and they were expecting their first baby. When the good news came, they called their parents immediately. Mendy’s father Avraham went to shul that morning with a broad smile on his face.

"Mazal tov! When was he born?" someone asked.

Recalling the date Avraham’s son told him, he stopped and looked at the calendar on his phone and said in amazement, "Tomorrow!"

90 year old Max is surprised, but pleased nevertheless, when his grandsons Shmuel and Chaim come to visit him. During their visit, they can't help noticing how old Max looks. "Zadie, how old are you... really?"

"Well Shmuel," Max replies, "I'm very, very old. In fact, I'm so old that when I was your age, the Dead Sea wasn't even dead, it was only sick."

Marvin Newman was 80 years old and a Zadie but he had one someone strange habit: he liked to drive fast. Very fast. One day he was driving home from shul and he was pulled over for speeding and not wearing a seat belt. Two days later – same ticket, same cop.

“So,” the officer said, “have you learned anything Mr. Newman?”

“Yes, I have,” Zadie Newman replied. “I’ve learned I need to take a different way home from shul.”

Little Moishie opened his Zadie’s old Chumash that he was told had been in the family for years. With fascination he looked at the old pages as he turned them. Then something fell out of the Chumash and he picked it up and looked at it closely. It was an old leaf from a tree. The leaf had been pressed in between pages.

"Zadie, look what I found," Moishie called out.

"What is it, Moishie?" his Zadie asked.

With astonishment in his voice, young Moishie answered: "It's Adam's suit!"

Steve Goldstein decided to take his Zadie, Hymie, to his first football game. They had great seats right behind their team's bench. After the game, he asked his Zadie how he liked the experience.

"Oh, I liked it," Zadie replied, "but I just couldn't understand why they were killing each other over 25 cents."

Dumbfounded, Steve asked, "What do you mean?"

Shlomo and Miriam Cohen were visiting Shlomo’s 95-year-old Zadie when he asked them to take him to buy a new Shabbos hat.

Shlomo was worried that Zadie wouldn’t have enough money to buy the hat and might become embarrassed, so he asked the salesperson to tell Zadie that whichever hat he chose costs $25 and Shlomo would pay the difference. Zadie picked out a beautiful new Shabbos hat and was charged $25. After he left, Shlomo paid the other $175.

Later Zadie said, "What a bargain! The last one I bought there cost me $200!

Rifka was speaking to her daughter Sarah about the importance of keeping up to date in her Judaic studies.

"You should always make sure to learn a little bit from the Torah each day,” said Rivkah.

“Well,” replied her mother, “You need to do it for school… and for life really. Look at your Zadie over there, he learns the Torah every day. You should take a lesson from Zadie.”

Sarah replied, "I don't have to, Mommy. They don’t test us on the Torah in school yet. And anyway, Zadie is studying for his final exams"

The First (Jewish) Thanksgiving
The Promise Of The Land
Which Chat Are You On?: Parshas Behar/Lag Ba’Omer
Do You Like Slow-Cooked Food? Thank the Jews
Comments
MOST POPULAR IN Funny Stuff
Our privacy policy