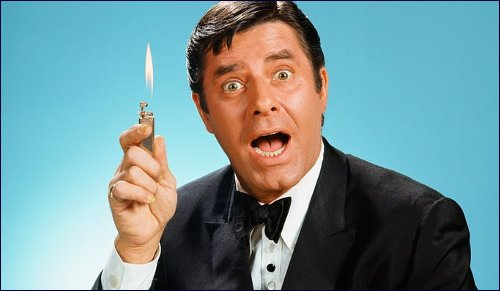 In addition to his classic films the iconic entertainer will be remembered for his great philanthropic work.

Jerry Lewis, who has died at the age of 91, was a consummate entertainer, one of the 20th century’s great comic geniuses and a great philanthropist. Beloved on screen, his personal life was often tumultuous. Suffering through decades where his work languished, he nonetheless continued to challenge himself with new projects well into his late eighties.

Lewis was born in 1926 in Newark, New Jersey. Most sources give his original name as Joseph Levitch. His parents were Jewish immigrants from Russia and they logged long hours as vaudeville entertainers in Catskills hotels. At times, Jerry Lewis performed with his parents; his first professional gig was singing “Brother, Can You Spare a Dime” when he was just five years old. Much of the time, though, Lewis lived with his grandmother while his parents travelled. That insecurity and fear of being abandoned never left him, he later recalled, and drove must of his comic material in later years.

By the time he was 16, Lewis was a full time singer and entertainer. When he was 18, he was working in a Detroit theater when he met a 23 year old singer with the stage name Patti Palmer. Within three months, they married.

At first, Lewis later recalled, he insisted that Patti convert to Judaism. Soon, though, Patti started reasserting her Catholic faith, encouraging Lewis to attend church with her. By the time they’d been married 21 years, in 1965, Lewis described having abandoned his earlier promise to have a Jewish home. His family, he acknowledged, weren’t pleased with his new religious lifestyle.

Their marriage lasted for 36 years but seems to have been deeply unhappy. Although the couple had six sons together, Lewis seems to have been unable to take pleasure in his family. Within a month of his divorce being finalized he married his second wife, SanDee Pitnick.

Lewis is best known for the many movies he made with Dean Martin. The two met while singing at the same nightclub in Manhattan in 1944, and soon perfected the comic set-up that would mark their work together: Martin would be the sophisticated, handsome singer while Lewis would be his slap-stick comic foil.

The act fit the mood of the times when Martin’s all-American persona seemed to be the ideal, and Lewis’ Jewish looks and ethnic persona were the stuff of comedy. On a personal level, too, Lewis, who confided he was always beset by anxiety and insecurity, might have envied the more assured Martin.

The two comedians were close friends for years but eventually grew apart. Lewis was jealous when Martin said he might want to revive his solo singing career. After a farewell performance in 1956, the two didn’t speak for decades. A 1976 on-air reunion was visibly awkward. It was only in 1987, when Dean Martin’s son died in a tragic accident that Lewis attended the funeral and got back in touch with his old friend.

Like so much in his life, Lewis seems to have been unable to grasp how important Martin was until he was gone. In a 2016 interview, Lewis explained “I miss Dean” and that he’d loved his collaborator and co-star. “I wish he were here. He was a miracle that God put in my life and working with him was a feeling I’ll never ever forget.” Martin had died in 1995 and “There isn’t a day I don’t think about him,” Lewis explained.

As movie styles evolved, Lewis’ brand of slapstick comedy fell out of fashion. “I look at the world through a child’s eyes because I’m nine,” Lewis explained in a 2002 interview; “I stayed that way. I made a career out of it. It’s a wonderful place to be.” Even though his career slowed down, Lewis continued to appear in movies, and in 2012 he even directed a musical version of his hit movie “The Nutty Professor”. The then-85 year old Lewis had never directed a stage production before but he relished the challenge. “There’s something about the risk, the courage that it takes to face the risk,” he explained at the time. “I’m not going to get greatness unless i have to go at it with fear and uncertainty.”

Lewis was also known for the annual Labor Day Muscular Dystrophy Telethons that he hosted from 1966 through 2010. Inviting celebrities such as Sammy Davis Jr. and Johnny Carson on to the show, Lewis eventually raised $2.45 billion for the Muscular Dystrophy Association. In 1977 he was even nominated for the Nobel Peace Prize for his work with the Association.

This work was important to Lewis even though he was always vague about the reasons for his commitment to this cause. In an interview on The Phil Donahue Show he once explained “It was a very personal, very private reason," but would not elaborate.

His work with the Muscular Dystrophy Association came to an end suddenly in 2010, apparently over a disagreement with the Association’s president. Lewis did make a promotional video for the telethon in 2016, but never appeared live on the show he’d built up and defined for decades. The annual telethon was discontinued afterwards.

Lewis was also criticized for being condescending and exploitive to the children on the show whom he dubbed “Jerry’s Kids”. The writer and editor Ben Mattlin, who’d appeared on Lewis’ telethon, spoke for many when he wrote that “those of us with severe, progressive, neurological conditions..(are) fine as we are. We don’t need fixing...We need respect… Your pity campaign is so dispiriting, so destructive, that or matter how many millions you raise, the ends do not justify the means.” In 2001, Lewis apologized for using insensitive language in his appeals, acknowledging some of the hurt he’d caused with this words, even as he raised huge amounts for medical research.

Jerry Lewis made the world a funnier place. His slapstick comedy routines would often feature him playing the fool, making grandiose plans and falling flat on his face. In real life, too, Lewis dreamed big, and sometimes fell far short of his goals and hopes. Yet in some ways, his determination to dream big paid off: raising billions for charity, creating a legacy of movies, publicly showing that it’s possible to apologize and keep growing, no matter what our stage in life – and above all, making us laugh.