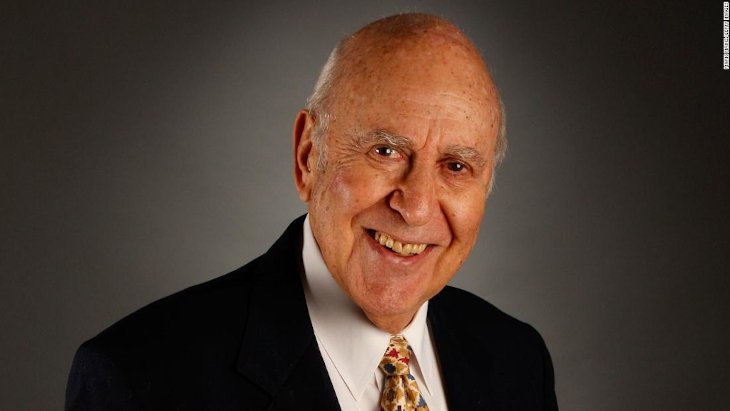 The comedic genius has left his indelible fingerprints on all facets of comedy.

On June 29th, we lost Carl Reiner, actor, writer, producer, director, author, and pioneer, at the age or 98.

We’ve all heard the cliché “The death or one man diminishes us all.” As a Jew, at these times, I prefer to believe “The life of one man can enrich us all.”

In Reiner’s case, the riches extend wide and his legacy is indelible.

He was simply an original. Whether you’re a comic, a comedy writer, director, actor; whether you’re a Boomer, a Gen-ex or y-er, or even a millennial, there wouldn’t be a “you” quite as you are if there hadn’t been a Carl, along with his band of merry men and women cohorts who not only created a new kind of comedy that tested boundaries but also broke some of the boundaries they created. 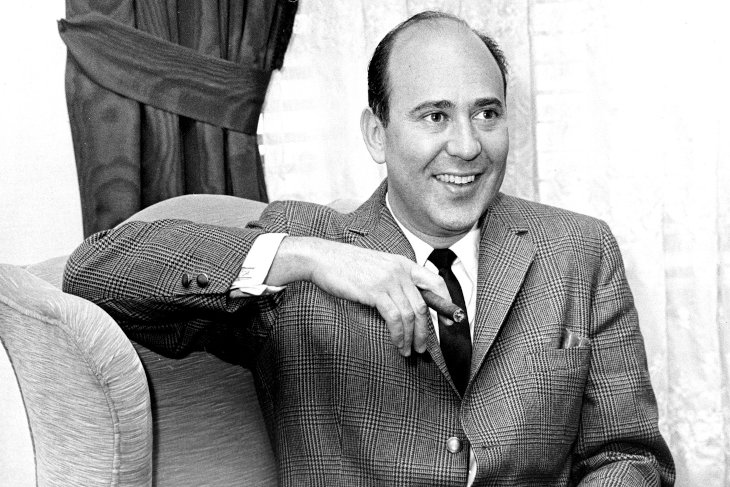 A father of the sketch comedy for Sid Caesar from 1950 through the 1960s, along with a dream team of writers and performers that included Mel Brooks, Mel Tolkin, Lucille Kallen, Neil Simon, Howard Morris, and Selma Diamond among other later luminaries, Reiner’s massive career had a bit of everything funny. He acted in films such as It's a Mad, Mad, Mad, Mad World (1963), The Russians Are Coming, the Russians Are Coming (1966), and the Ocean's film series (2001–2007). He co-wrote and directed some of Steve Martin's early hits such as The Jerk (1979), and directed notable comedies including Where's Poppa? (1970), Oh, God! (1977), and All of Me (1984).

It was Reiner who created (and sometimes acted in) The Dick Van Dyke Show (1961) loosely based on Caesar’s meshuggener Writing Room, where he met lifelong best friend, Mel Brooks.

It started as a party game. It went viral. I’m talking about Reiner’s loving and slightly insane collaboration with Mel Brooks. Of course we’re talking about the 2000 Year Old Man, where Reiner “interviewed” Brooks, the ancient Jewishy, irreverent codger. 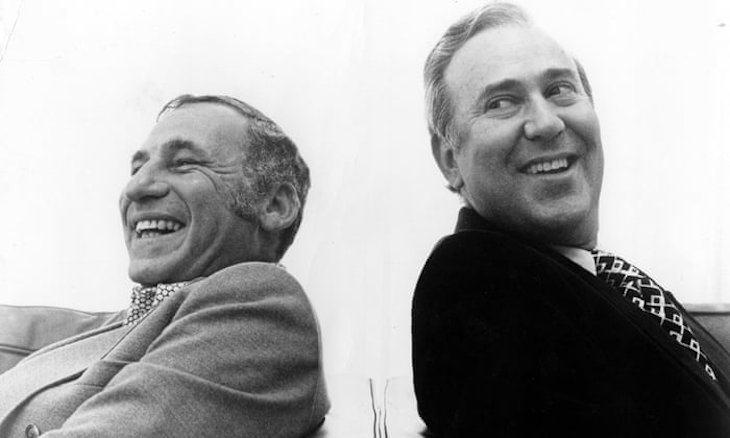 Here’s the megillah on Brooks’ and Reiner’s’ oldest mensch in the universe. (Don’t worry, I’ll shorten.)

Stoked with a little Manischewitz at parties Reiner would throw Brooks a character – from a Tibetan Monk to an astronaut. As the story goes, one night at Mel Brooks’ Fire Island house, Reiner threw him a 2000 Year Old Man who had seen it all. Among hundreds of encounters with the famous and not-so-famous, he mistook Paul Revere for an anti-Semite (“The Yiddish are coming! The Yiddish are coming!”)

This was the stuff of not “regular” parties but those attended by humor royalty. It was the late Steve Allen who suggested the two make a record, and Allen booked a huge recording studio, filled with coffee, juice and friends. During the session in 1961, Brooks let his uncensored mind loose as Reiner fired questions, and the wild Yiddish, 2000-year-old man became history on vinyl, winning multiple awards. 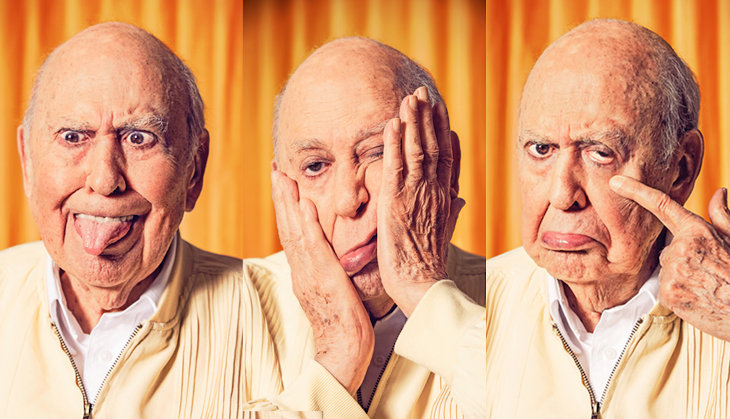 Carl Reiner, the son of Jewish immigrants was born in the Bronx, New York City, on March 20, 1922 to Irving Reiner, a watchmaker from Austria and Bessie (née Mathias) from Romania. His older brother Charlie served in the 9th Division in World War II.

It was his brother Charlie who spirited 16-year-old Carl out of a machine shop by telling him about a free drama workshop sponsored by the Works Progress Administration. This was his first venture into the world of show biz.

The change later inspired one of the funniest laugh-out-loud plays and films of all time, Enter Laughing which was a semi-autobiographical stage play in 1963, and then a film in 1967 about the major mishaps of a young Jewish boy in the Bronx who dreams of being Ronald Coleman, while his hysterically worried mother insists he become a pharmacist.

During World War ll, he served with the United States Army Air Force. Initially trained to be a radio operator, after a bout of pneumonia, he spent almost a year at to Georgetown University training as a French interpreter. This led to his directing a Moliere play in French, his first directing gig. Next stop: Hawaii as a teleprinter operator. And then, bashert! The night before he was scheduled to ship out, he attended a Special Services production of Hamlet. After an audition before actor Maurice Evans, an officer with the unit, he was transferred to Special Services. Until 1946, Reiner entertained around the Pacific theater, until he was honorably discharged in 1946. 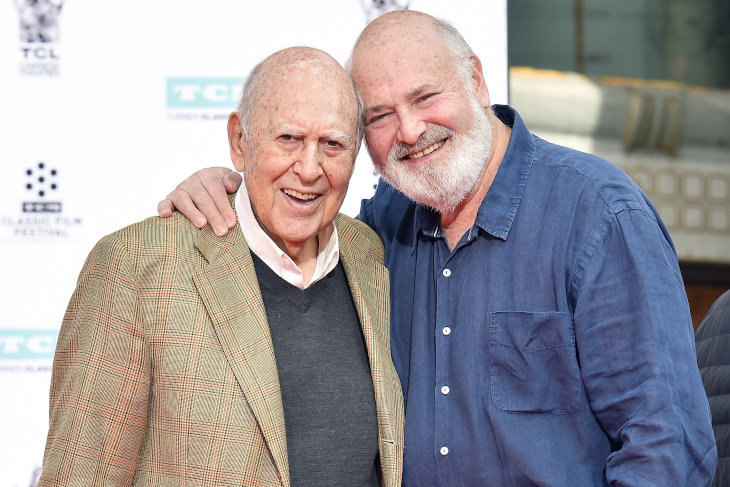 Reiner had a lot to return to: his wife, singer Estelle Lebost, to whom he was married for 64 years until her death. The couple had three talented children actor and filmmaker Rob Reiner (b. 1947); poet, playwright, and author Annie Reiner (b. 1949); and painter, actor, and director Lucas Reiner (b. 1960).

In an interview I caught with Rob Reiner, and I’m paraphrasing, he commented that “…there is no better comedy or acting school in the world than the home he was raised in, with dad, and pals such as Mel Brooks and Norman Lear.”

His autobiography: Too Busy to Die (2017) was both a title and his philosophy.

Reiner, the recipient of 11 Emmy Awards, a Grammy Award, and the Mark Twain Prize for American Humor who among many other honors was also inducted into the Television Hall of Fame in 1999, believed his longevity was a attributable to several things, apart from DNA: keeping active, having a heck of a sense of humor, and enjoying the love of family and good friends.

Those of us of my generation cannot imagine a world without our Carl Reiner. And thanks to him, his genius, his body of work, there will always be one.

Top Neil Simon Quotes and Excerpts
Bechukotai 5782: Divine Retribution
Behar 5782: Working to Live or Living to Work?
The Wholeness of Being Broken
Comments
MOST POPULAR IN Art Smarts
Our privacy policy