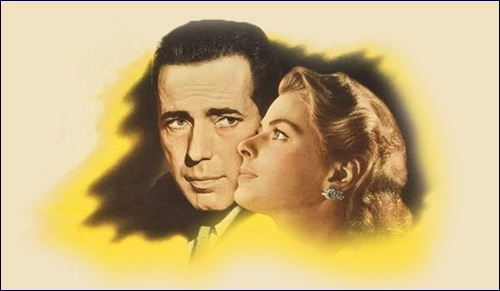 At its core, the story is about American responsibility to help those suffering at the hands of the Nazis.

Casablanca, the classic and timeless film about love, self-sacrifice, and escape from a world on the brink of collapse, celebrates its 75th anniversary this year. Though little on its surface might suggest it, it remains one of the most Jewish films to come out of the so-called Golden Age of Hollywood.

The lack of obvious Jewishness about Casablanca is hardly surprising when you consider what Hollywood looked like back then, but, at the same time, neither is the fact that so much Jewishness hides just below its surface. An interesting paradox becomes evident when you look at the history of the American movie industry: despite Jews single-handedly creating and then largely controlling Hollywood during the early days of the 20st century, there was nary a trace of actual Judaism to be found in the films themselves. Even Cecil B Demille's two takes on the Ten Commandments was ultimately a pretty Christian reading. Over the past few decades, though, the increase in diversity in all aspects of American movie-making has led to more explicitly Jewish movies than ever before.

Although the film dealt with what was happening in Europe, there is not a single reference to Jews, the main victims of the Nazis.

Casablanca fits perfectly into this paradox. Despite being made in the early days of World War II, and being released during the war's absolute peak and revolving entirely around refugees trying to escape the “Nazi menace” – as it was charmingly but woefully inadequately called back then – there is not a single reference to Jews to be found anywhere in the film. 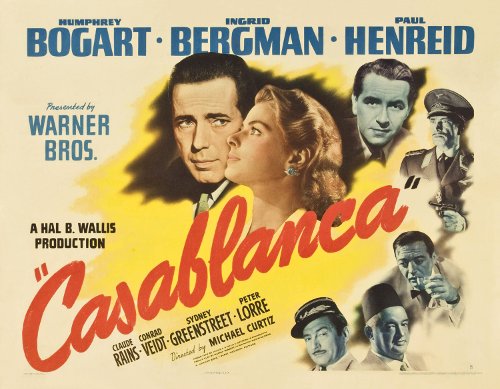 There is nothing Jewish about the film's major players. The star-crossed lovers at the centre of the film, Rick Blaine (Humphrey Bogart) and Ilsa Lund (Ingrid Bergman), almost definitely aren't Jewish and they're certainly not played by Jewish actors, nor are Claude Rains' Captain Renault or Paul Henreid's Victor Lazlo. Nor is Sam, the black piano player played by Dooley Wilson whose performance of As Time Goes By added immeasurably to the film's staying power. These are some of the greatest characters in celluloid history, portrayed with perfection by some of the greatest actors of the day, but considering its subject matter, the total absence of major Jewish characters does seem a bit odd in retrospect.

The rest of the cast fits in perfectly with Hollywood values at the time as many of the most noteworthy supporting players – including some of the Nazi officers - were portrayed by Jewish actors who themselves were refugees from Europe, but none of the characters they played were ever explicitly identified as Jews. This isn't exactly surprising considering the nature of then contemporary Hollywood, but there's also something deeply disappointing that the biggest film of the time dealt head on with what was happening in Europe but failed utterly to mention the main victims of the Nazis.

Casablanca's coyness about just who was suffering most under the Nazis (and, no, there's no mention of other groups who were persecuted) doesn't take away from the film's brilliance; nor does it remove the distinctly Jewish soul lurking just underneath the surface. The people who ran all the major studios at the time experienced anti-Semitism at a level that, thank God, most of us can barely imagine. From escaping the horrors of pogroms and the build-up to the Holocaust to being ostracised in America and kept out of so-called respectable jobs, the Jews who created and maintained Hollywood were no doubt anxious to keep their “otherness” as much under wraps as possible.

The Jews who created Hollywood were no doubt anxious to keep their “otherness” as much under wraps as possible.

This becomes especially evident by taking a look behind the scenes of Casablanca and the many Jews who used the limitations of the old Hollywood system to make a work of art that was more subversive and more personal than might appear at first glance. Casablanca started life as a late 1930s stage play named Everybody Comes to Rick's, which was co-written by Joan Alison and Murray Bennett, the latter of whom was a Jew who came up with the idea for the play after he and his wife had returned to her native Belgium in 1938 to visit her relatives, who then sent them on a mission to Vienna, which had just been rocked by the Anschluss (the annexation of Austria by Nazi Germany), to help some of their other relatives smuggle money out of Europe. Bennett's message with the play was clear: something truly evil was beginning in Europe and America would only be able to maintain its isolationist stance for so much longer.

A Story of Love, Courage and... Judaism?

The story of both the play and the film, which would be heavily rewritten before reaching the screen in 1942 by a trio of Jewish screenwriters, Howard Koch and Philip and Julius Epstein, was, at its core, always about American responsibility to provide help to those who were suffering at the hands of the Nazis – their relatives most certainly included.

It’s a story of responsibility, sacrifice, and the true meaning of love – major themes that reoccur throughout 3500 years of Jewish tradition.

The story points to this quite explicitly, if you think about it for a moment. Rick is a one-time American soldier doing his best to avoid the new war heating up around him by running a night club that would be a neutral zone where the citizens of Casablanca, from both sides of the war, could come in for a drink and find a reprieve from what was going on outside. Despite allowing the resistance to the Nazis to gather there in secret, Rick always did his best to stay out of the conflict itself. This all changes when Ilsa, the woman who years before stole then broke his heart, returns to his life and sets him on a course where he ultimately will have to decide between doing what's right for her and what's most likely to bring happiness to himself – even it means giving up the love of his life for good.

The metaphor is obvious and, even if the film did ultimately arrive in cinemas in 1942, after the attack on Pearl Harbor and the United States' entry into the war, its highly moral center remained intact. Casablanca is a film written, directed and produced by Jewish immigrants which may not have dealt with the Holocaust on a textual level but was very specifically about awakening a sense of responsibility in their American compatriots to help their relatives whose lives were being trampled out by the real-life versions of the bad guys in the movie.

It is also a film brimming over with some of Judaism's most universalistic themes. Had Casablanca been nothing more than a call to action for a specific people living in a specific time, it wouldn't be the enduring masterpiece it is. Instead, it’s a story of responsibility, sacrifice, and the true meaning of love – major themes that reoccur throughout 3500 years of Jewish tradition. That it all happens in a city with an incredibly rich, though often troubled, even tragic Jewish history is only the icing on the cake.

Theodore Bikel: A Jewish Man for All Seasons