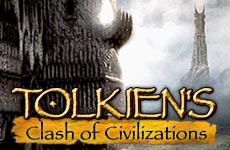 The eerie relevance of The Two Towers.

If you think about it, making the connection between the obliterated Twin Towers and The Two Towers is a dime-store synchronicity. The World Trade Center was a morally neutral symbol of commercial dynamism (though Tolkien himself would have taken a darker view of those towers). In contrast, the towers of the film's title are twin projections of unambiguous evil. Still, the comparison is irresistible -- even director Peter Jackson says he gets an "eerie" feeling thinking about it -- because audiences see Jackson's first-rate film versions of the Tolkien books, and immediately grasp the relevance the stories have for our convulsive times.

The Lord of the Rings trilogy explores the nature of individual heroism in the midst of an epic clash of civilizations, one that pits freedom-loving peoples of the West against merciless totalitarians from the East. As the hobbits Frodo and Sam make their way through the bleak and hostile land of Mordor to destroy the Ring of Power, which would bring about the enslavement of the world if it fell into the hands of the Dark Lord Sauron, their companions in the West rally a coalition of tribes to wage war against Sauron's minions living among them.

Some Western peoples of Middle Earth, for reasons of bourgeois comfort, selfishness, or cynical despair, want no part of the coming war, and think mistakenly that they can avoid trouble if they simply lay low. It falls to the good wizard Gandalf, the ascendant king Aragorn, and their followers to convince the West to stand fast and fight for its freedom and way of life. As many of us do when we read stories of the hideous weapons that could be in the hands of terrorists, we know how Frodo feels when he tells Gandalf that he wishes he had not been born into such a time as this.

The old prophet-wizard counsels Frodo to turn away from such futile and self-defeating conjecture, because no man can choose the times in which he lives. Says Gandalf, "All we have to decide is what to do with the time that is given us."

The Lord of the Rings is about how men, including the humblest of men, choose to act in the face of moral urgency and engulfing peril.

The Lord of the Rings is about how men, including the humblest of men, choose to act in the face of moral urgency and engulfing peril. It is about the power of humility, the wisdom of mercy, the glory of self-sacrificial valor, the false glamour of evil, the workings of grace, and above all, the necessity of faith. Put more plainly, LOTR screenwriter Phillippa Boyans says it's about goodness -- an idea that leaves many moderns skeptical and confused.

In The Two Towers, when a weary Frodo begins to lose faith in his ability to succeed on his mission, and in the prospects for the West's survival, we hear an echo of our own sophisticated cynics and cultural pessimists, who despair of defending our civilization from its enemies because they do not believe we have anything worth defending.

"There are things that people hold onto to keep them going," says his faithful servant Sam Gamgee.

"What are we holding onto?" Frodo asks.

"That there is some good in this world, and that's worth fighting for," Sam replies.

That looks banal on the printed page, but the line has great force in the film. Sam is a simple man, but he knows a few things well, and his chief virtue is loyalty. He doesn't trouble himself with the big picture; all he knows is that his homeland and its people are worth defending against those who would destroy them. That is enough; indeed, it is more than many more intelligent men and women of our day know. It is the wisdom of the common man, the kind of English infantrymen Tolkien knew in the trenches of the Great War. The Hun is still at our borders, which still must be defended.

When Saruman masses his troops in The Two Towers, before the Battle of Helm's Deep, it is tempting to look upon the battalions of Orc-slaves ready to slaughter the men of the West at the command of the Sauron's wizard servant Saruman, and think of the fanatical slaves of Islamism, under the command of mad mullahs. And there would be some truth to that. But as Russell Kirk observed, you cannot pin Tolkien down to any specific historical allegory. "His three volumes are a picture of the perpetual struggle between good and evil; his concern is the corrupting intoxication of power." Tolkien believed in good and evil, but also held that "the line between good and evil runs straight through every human heart."

This is why it is a mistake to view The Lord of the Rings films as merely inspirational movies into which we can neatly read self-congratulatory, pro-Western messages in a time of war. Bradley J. Birzer, author of the recently published J. R. R. Tolkien's Sanctifying Myth, asserts that Tolkien's message included "a call to defend all that was best in the long history of Western civilization." But Birzer reminds us that for Tolkien, "Evil does not always come in the form of war or totalitarian terror. Tolkien saw in the impersonal, machine-driven capitalism of the twentieth century, and especially its handmaiden, the democratic bureaucracies of the Western world, a form of soft tyranny almost as oppressive as fascism or communism."

The orthodox Catholic Tolkien saw pride, and the all-consuming craving for power it fosters when unchecked, as the root of human evil. In LOTR, Sauron and his servant Saruman desire to gather all power unto themselves so they can subjugate the natural world and every living creature within it, rather than seek to find their rightful place as reverent stewards of an ordered creation. They were slaves of their desire for raw power, which was symbolized by the Ring. With perfect power comes total enslavement, Tolkien teaches; this is why not even those who think they would use the Ring to do good are lying to themselves.

I want to be careful when I say this, but it seems clear to me that Tolkien would have looked upon the Twin Towers of the World Trade Center as symbols of a form of tyranny to which prosperous and free Western man is susceptible. Of course, there can be no doubt that he would have seen the attack upon them as monstrous, and would have backed some kind of military response to combat the Islamic barbarians. Whatever the contemporary West's sins, there is plenty of good in this world we have made for ourselves, and there is no question that it's worth fighting for.

We will be judged by how we use the power we accumulated, by what we have done with the time that was given us.

That said, Tolkien does not let us off the hook easy. We will be judged by how we use the power we accumulated, by what we have done with the time that was given us. Are we an arrogant and materialistic people? Do we restrain ourselves in accordance with principles of justice, mercy, decency, and reverence for life, or do we seek knowledge and riches for the sake of imposing our will on things that ought to be left undefiled? Will we tolerate the intolerable rather than limit our freedom of choice? Is our seemingly unstoppable march to globalization unwisely concentrating power in the hands of the few? Do we see the natural world as merely ours for the taking and selling?

These are the kinds of questions Tolkien's great narrative puts to both the serious reader, and despite the surfeit of action, to the viewer of the films. Both the author and his cinematic interpreter inspire the LOTR audiences to stand firm in defense of our civilization, despite its flaws, without rewarding them with a sense of unearned triumphalism. There is far too much at stake for that: only the souls of individuals, and the soul of Western civilization. Prof. Birzer quotes Tolkien writing that Gandalf was wholly dedicated to "the defence of the West against the Shadow," and the same is true for Tolkien. We are fortunate to have these books, and now these films, in the present moment, to give us hope and a reason to dig in for the long fight ahead.

And yet, even as the shadow cast by Islamofascist minarets is the most immediate source of this present darkness across our civilization, it is by no means the only one.

A Jew in the NFL
Near Death Experience Panel
The Western Wall: The Heart of the World
Ask the Right Question: Tisha B’Av
Comments