Think: Are You a Victim of the Abilene Paradox? 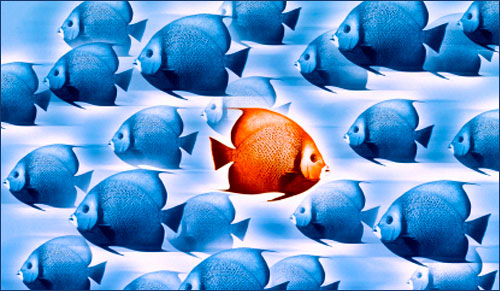 Bowing to social pressure versus thinking for yourself.

On a recent visit to the U.S., I accompanied my father to his weekly discussion group. Sitting on the periphery of the circle, I listened as 25 people, mostly non-Jews, debated the week's topic: the Abilene paradox.

Taking its name from the Texan town of Abilene, the term describes a situation in which a group of people collectively choose to do something that none of them privately wants to do.

The background story goes like this: One summer afternoon, four family members are sitting on the porch in 104-degree weather, when one suggests they drive to Abilene, 54 miles away, for dinner. Despite the car's lack of air-conditioning, the second one says, "Great idea," the third says, "Fine with me," and the fourth says, "Sure, let's do it." They take the long, hot ride, eat what turns out to be lousy food, and return four hours later exhausted. Only then do they discover that none of them wanted to go – the first suggested it because he thought the others might be bored, and the others went along because each thought it was what everyone else wanted.

The Abilene paradox is a form of groupthink in which people are more concerned with avoiding conflict than with arriving at the optimal decision.

All 31 of the engineers working on the Challenger privately opposed its launch – yet somehow the decision to launch it was made.

One famous case in which the Abilene paradox may have been operative, much discussed by the group, was NASA's decision to launch the Space Shuttle Challenger in 1987. Seventy-three seconds into flight, the Challenger broke up and crashed into the Atlantic, killing its seven-member crew. Upon investigation, it was discovered that all 31 of the engineers working on the project had privately opposed its launch – yet somehow the decision to launch it was made.

I listened as the moderator gave each person in turn the opportunity to express his or her opinion. Most believed that the Abilene paradox stemmed from a flawed organizational culture – one that expects people to defer to a superior, that overly promotes being a team player, or that discourages opposition.

But there was something everyone seemed to be overlooking. As the group was about to conclude, I raised my hand.

"I actually find this whole discussion very humorous," I told them. "I live in Israel, and believe me, Israelis have no problem voicing dissent. Do you know what Knesset proceedings are like? It seems to me that the Abilene paradox could occur only in a society of very polite gentiles." Everyone burst out laughing.

The truth is, the Abilene paradox could occur only in a society in which not wanting to be different takes precedence over believing in yourself.

Following your own guiding star is a particularly great challenge for teens and young adults. Take, for example, the college campus hook-up scene. Researchers have found that neither men nor women are as comfortable with it as they seem. Part of the reason why hooking up is nevertheless so rampant is "pluralistic ignorance": although neither party may want to hook up, each believes the other does, so succumbing to perceived peer pressure, they do. (1) Many college students are simply afraid to say, "I don't want to," for fear of social ostracism. Yet if they did, the research indicates they'd find more sympathizers than they expected.

Jews have been able to change the world precisely because, when necessary, we’ve been willing to be non-conformists, even iconoclasts.

Bowing to social pressure (which unfortunately follows many of us into adulthood) rubs against the Jewish value of thinking for yourself. Jews have been able to change the world precisely because, when necessary, we’ve been willing to be non-conformists, even iconoclasts (remember Abraham smashing the idols?). No matter how far we may stray from it, individuality remains the Jewish ideal.

But try telling a young person, "You're smart – don't do what your friends are doing! Listen to yourself!" More often than not, it doesn't work. Nancy Reagan's anti-drug campaign slogan, "Just Say No" was based on the naïve belief that any typical teenager who thinks about the dangers of drugs will be able to muster the strength it takes to swim upstream. The fact is, too many can't.

Yet just think what would happen if we had that belief in ourselves. Or if one of those 31 NASA engineers had the temerity to stand up, bang on the table, and shout that the Challenger cannot be launched.

So here’s what I suggest to teens and young adults who deep inside want to follow their own hearts and minds rather than those of the crowd. Remember:

1) God gave you your brain; use it. If you were given a new Porsche, would you let it sit in the driveway while you borrow a friend's '97 Ford? You have a first-rate mind – don't let it sit in the wings while letting others make your decisions for you.

2) Despite the powerful force of peer pressure, at the end of the day you will be left standing all alone carrying the burden of all your unwise choices. Wouldn't it be nicer to enter the post-college world without that baggage? Yes, it’s challenging in the short term, but think how you’ll feel in the long term.

3) Believe it or not, people will respect you for standing up for your beliefs if you do it with confidence and integrity. Beyond all the apparent superficiality in this world, people are a lot deeper and more real than we give them credit for. Deep down they’ll admire you for sticking to your guns.

Following a visit to Israel, a Chinese school principal commented that the Jews there were willing to "overturn the world if need be" in questioning and challenging authority. (2) Jews indeed have overturned the world, and others have as well. Wherever and whenever necessary, let's be willing to do it again.

The Straightforward Arithmetic of Jihad

A Lesson in Compassion from Fauda’s Lior Raz
Why Are The Prayers Of Yom Kipur So Repetetive?
Ha'azinu 5783: A Time for Unity!
Twisted Thinking
Comments