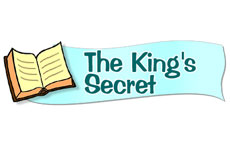 Usually we imagine kings as being very distant and separate from their people. The story teaches us that it's not always true.

Many years ago in a far off land there was a king. He was a good king with a kind heart. He cared about his people and always made sure not to burden them. The people of his country liked him very much, because they felt that the king did everything he could to make life pleasant for them.

The king had a secret. Sometimes he would dress in simple clothes and go out to mingle and talk to the people. This was his secret way of finding out what the people really needed and wanted. The only ones to know the secret were the king's two guards, Michael and Josh who would accompany the king on his outing. They dressed in plain clothes and kept far enough away from him so nobody would notice them and catch on to the secret.

Like many times before, the king put on farmer's clothes and went out to the city. He walked around talking to the people. He saw a farmer and asked him, "Excuse me sir, where could I find a horse and wagon going to the village of Sode?" In those days a taxi was a horse and wagon with a driver.

The farmer said, "I happen to be going to that village right now. Walk there with me and we'll share a ride together." The two went together like two friends talking about this and talking about that. The guards, Michael and Josh, followed the king from several yards behind.

Just then the king realized that the two guards may have lost him. "I hope they saw me get on the wagon," he thought. "I'm sure they'll get on the next wagon and catch up with me."

Michael and Josh, the guards, were looking all around for the king and couldn't figure out where he had disappeared. "Maybe the king got on a wagon with that farmer he was talking to?" said Michael. They ran up to one of workers at the station and asked if he saw a man who fit the description of the king get on a wagon. "Why yes I did. I saw a man who looked just like him run and jump on a wagon that was on its way to Sode."

"Thanks!" They immediately got onto the next wagon and started racing after the king.

The king asked the farmer all sorts of interesting questions. "How do you think things can be better in your town? Are there enough jobs for everyone? Are people happy with the king?"

The farmer was pleased to have such nice company to travel with.

The wagon finally reached the village of Sode. The farmer and the king got off together, and then bid each other farewell.

A moment later, the two guards arrived and jumped out of their wagon. They immediately started searching for the king. "Hey Michael," said Josh, "there's that farmer the king was traveling with. Let's ask him."

They ran up to the farmer. "Where is the king? Which way did he go?" the guards hurriedly asked.

"Huh?" the farmer was baffled.

"Aren't you the man who got onto a wagon with him?"

"That man was the king? Did you say I was traveling with the king?"

"The king!?" exclaimed the farmer. "I don't believe it! I thought he was just another farmer like myself."

"The king occasionally does this." Josh explained. "He dresses up in simple clothes and goes out to the people to see what their real needs and wants are. You had the privilege to speak with him for a whole hour! But enough talk, we've got to find him. Which way did he go?"

"He went that way. Come, I'll help you." The three of them started running towards the center of Sode.

"What an opportunity this is for me," the farmer said to Michael and Josh. "I am so lucky to know the king's secret. Now that I know the king himself, I'm going to keep up our relationship. I'll visit him whenever I can. I'll ask him for advice and guidance. What a relief it will be to have such a wise king to come to. This has truly been a wonderful day for me."

"You know," said Michael. "I talk to the king sometimes about my own personal matters and he always gives me such a warm feeling that he wants to help."

They found the king talking to a small group of people. The two guards and the farmer ran up to him.

The farmer whispered in the king's ear, "Your Majesty, I know your secret. If you wouldn't mind, when you have a moment, I would like to talk to you about some very important matters."

The king winked at the farmer and whispered in his ear, "It would be my pleasure."

The Jewish People know the King's secret. Our King, our Creator, makes Himself closer to us every year during the entire month of Elul and the first half of Tishrei. We have a special opportunity to ask for all of our needs. It's a chance to pray for a good upcoming year. All we need to do is to remember that during this time God makes Himself closer to us. We are lucky because we know the King's secret.

Q. Why was the farmer so surprised to learn that the king was traveling with him?
A. Usually we imagine kings as being very distant and separate from their people. The story teaches us that it's not always true. There are times when the king makes himself VERY close by coming down among to his people. So too with our God, the King of Kings.

Q. What did the farmer resolve to do once he realized he had an opportunity of knowing the king?
A. To keep up a relationship with him by visiting him regularly to discuss important matters with him.

Q. Do you think God is close to us?
A. God is always near. But during the months of Elul and Tishrei God makes Himself very close to us. It is a special chance to nurture and build on the relationship.

Q. Knowing that God is closer to us during the High Holiday season than usual, what do you want to ask Him?