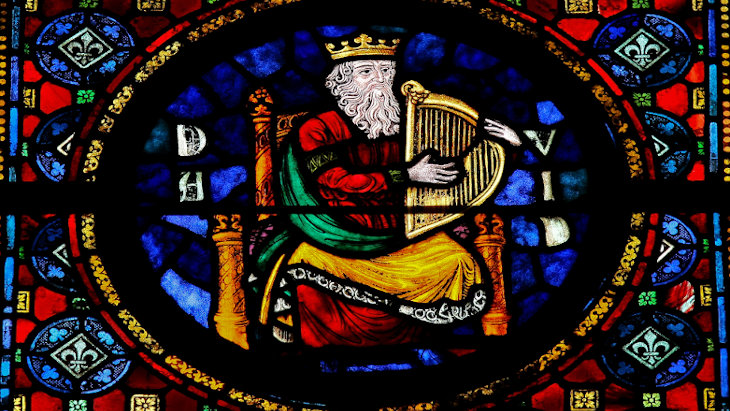 As Yom Kippur approaches, here are inspiring lessons from this seminal figure.

King David is the most famous king of Israel. As a child he was ostracized by his family, and yet he was anointed king of Israel by the prophet Samuel. He valiantly defeated the giant Philistine Goliath, only to find himself being hunted by King Saul, who saw David as a threat to his kingdom. He finally became king and successfully fought many wars against Israel’s enemies.

Despite his success, he was plagued by tragedies, in particular the rebellion of his own son, Absalom. At the end of his life he initiated the building of the holy temple which was to be completed by his son and successor, Solomon.

What lessons can we learn from this seminal historical figure?

David enjoyed great success in life but he remained the epitome of humility, recognizing that all his achievements were ultimately from God. When he asked King Saul to allow him to fight Goliath who was blaspheming God and insulting the Jewish people, David explained that he had already defeated lions and bears in battle but he didn't ascribe his success to himself. He declared, "God, Who saved me from the hand of the lion and from the hand of the bear, will save me from this Philistine.”1

With this attitude, David was able to defeat his fearsome adversary, Goliath, because he knew that God would not tolerate Goliath’s blasphemy or his insults. We tend to think of humility as a trait that is accompanied by passivity and timidity, but that was not the case with David. Rabbi Noah Weinberg explains that when a person recognizes that all his success comes from God, then he can achieve absolutely anything, if it is in line with God’s will because with his ego out the way he becomes a channel for God's power. David serves as the example par excellence of this concept.

2. Using Your Traits for the Good

David was an incredibly righteous man, but he was not born this way. He had a natural leaning to certain negative traits, which was indicated by his resemblance to the evil Esau, the older brother of Jacob. Both are uniquely described as reddish – symbolizing a hot-blooded propensity that can express itself through violent behavior. When God instructed the prophet Samuel to anoint David as the next king, Samuel hesitated because he saw the similarity to the Esau, who was a violent criminal and feared that David would follow in Esau’s ways. God explained to Samuel that David did indeed have a tendency to violence but that he would direct it in the correct fashion, channeling it towards fighting Israel’s enemies and standing up for God.

David teaches us that an individual can utilize even seemingly negative tendencies for good and thereby achieve his personal potential.

3. Seeing God's Hand at All Times

David faced many enemies in his life, but he was extremely forgiving toward them. His son Absalom rebelled against him and threatened his life, yet David remained devoted to his son, and instructed his men to leave him unharmed.2

How was he able to avoid the desire to take revenge? Because he recognized that everything that happens to a person is sent as a message from God, and therefore there is no benefit in getting angry with any individual who merely serves as the messenger.

At the height of Absalom’s rebellion against David, when he was at his lowest ebb, his enemy Shimi ben Geira cursed him publicly. David’s men wanted to kill Shimi for rebelling against the king, a capital offense, but David instructed them not to harm him because he saw the curse as a message from God. David realized that God wanted him to endure this suffering and that Shimi was merely an instrument of God.3

We learn from David that it is fruitless to get upset with people; instead, we should try to discern how God is communicating to us.

David did not live a life of perfection; he sinned on more than one occasion, but it is his reaction to his mistakes that sets him apart. After he committed a particular transgression4, the prophet harshly rebuked him, and warned him of severe punishments. David had ample justification for his actions, but he immediately admitted his mistake, saying, “I have sinned to God.”5

The sages note that David’s predecessor, King Saul, sinned less than David, but when he was rebuked, he answered with rationalizations of his actions. Consequently, he was stripped of his kingdom, whereas David was forgiven.6

The prerequisite of repentance is admitting one’s mistakes and not blaming other people or circumstances. David serves as a prime example of what it means to do teshuva, repent by owning up to his mistakes, learning from them and vowing not to repeat them.

Adapted from Rabbi Gefen's new book, King David and the Kings of Israel.

What was the role of the king of the Jewish people? Why were some kings so righteous and others so evil? What can we learn from King David’s life?

Rabbi Yehonasan Gefen addresses these and many other questions in his new book, delving deeply into the characters of great kings of Israel. Click here to order.

Rabbi Yehonasan Gefen is a close student of Rabbi Yitzchak Berkovits and a senior member of the Jerusalem Kollel.  Rabbi Gefen’s has spent over 12 years of intensive Torah and Talmudic study at Aish HaTorah and the Jerusalem Kollel, and has a degree in history and politics from the University of Birmingham, UK. Rabbi Gefen has written numerous articles for Hamodia and other publications. His writing inspires people across the spectrum of Jewish observance to live with the vibrancy and beauty of Torah. Rabbi Gefen has recently published his fifth book. His new book delves deeply into the characters of great kings such as David, Shlomo, Chizkiyahu, and Yoshiyahu and those of the most maligned of kings, such as Yeravam, Achav, and Menashe, focusing on the most significant aspects unique to each king. Its readers will develop a whole new understanding of the kings of Israel and the overall institution of the kingship of Israel. Click here to order: https://www.feldheim.com/king-david-and-the-kings-of-israel Visit Rabbi Gefen's site at http://rabbiygefen.blogspot.com/

High Ideals, Murder and Me: What It Means to be Good
My Visit to Walter Reed Army Medical Center
The Nobel Prize-Winning Neuroscientist Mussolini Couldn’t Stop
The Beauty Queen of Jerusalem: 6 Jewish Communities Who’ve Long Called Jerusalem Home
Comments
MOST POPULAR IN Israel
Our privacy policy