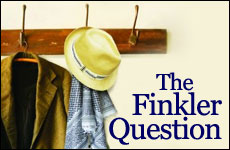 Julian Treslove isn’t Jewish, but he is fascinated by Jews, especially his two best friends Sam Finkler and Libor Sevcik. Julian even begins to imagine that he actually might be Jewish himself. Sam Finkler, on the other hand, exhibits a Jewish self-hatred that Julian simply cannot fathom. Julian, Sam, and Libor are the central characters of Howard Jacobson’s acclaimed novel The Finkler Question, which explores themes of Jewish identity, Jewish self-hatred, and anti-Semitism through the eyes of the trio of friends.

The winner of the 2010 Man Booker Prize – one of England’s most prestigious literary honors – The Finkler Question is a book filled with ongoing ironies. One of them is that Julian continues to express a respect and sincere curiosity about Judaism that his Jewish friends do not share. When Julian is mugged one night on a London street, he believes it was an anti-Semitic attack, and takes it as a message that he may be Jewish after all. With this new-found, possible identity, he attempts to understand Maimonides’ “13 Principles of Faith” and dabbles in Yiddishisms. He also frequently rails against the anti-Israel programming of the BBC, where he used to produce minor documentaries, and worries genuinely and deeply about resurgent anti-Semitic attacks worldwide. Meanwhile, Sam and Libor seemingly shrug off the escalating dangers.

Jacobson explores the phenomenon of Jewish self-hatred through the character of Sam Finkler. A well known pop philosopher and best-selling author, Finkler traffics in trendy Israel-bashing to further his fame, joining a group of B-list celebrities and academics in a group called “ASHamed Jews,” whose purpose is to vilify Israel for its “criminal” existence and mistreatment of the Palestinians. It is a hallmark of Jacobson’s ironic wit that beyond the grotesque absurdity of the name, the members move their meetings from a private home to the public Groucho Club, because as Sam points out, “It made no sense at all to be ashamed of being an ASHamed Jew. The whole point of their shame was that it was out there for all to see.” Out of respect, the group will not meet on Rosh HaShana, Yom Kippur, and other Jewish holidays.

Non-Jews often find more right with Judaism and Israel than do Jews.

Howard Jacobson has hit upon many truths in this book about Jews’ often uncomfortable connection with their spiritual identity, as well as the truism that non-Jews often find more right with Judaism and Israel than do Jews. Reading the book reminded me of many, many non-Jews I have met or corresponded with as a result of my articles on Jewish spiritual issues who have said they admire my respect for Jewish tradition, while at the same time expressing disbelief at the number of Jews who choose not to maintain any aspects of Jewish faith, or who inexplicably (to them) bash Israel in public. While the character of Julian Treslove is not animated in any way by Christian theological sympathies to Israel (and in fact is a morally problematic character in many ways), he nonetheless represents the kind of non-Jew who is genuinely puzzled by Jewish self-hatred.

Sam Finkler’s character, like Jews in real life too numerous to count, has rejected his Judaism as a way of rejecting his father, yet he hypocritically seizes on his Jewishness to further his personal gain, as in when he becomes a spokesman for “ASHamed Jews.” And if Israel’s political policies aren’t enough to justify Finkler’s antipathies, well, there are those Jews who have brought infamy on themselves – and by association, with all Jews – through financial or other crimes. Jews like Sam Finkler (formerly “Shmuelly”) have no shortage of excuses.

And yet, also as in real life, there are no atheists on foxholes. By the end of the story, Sam Finkler begins to say Kaddish for his dear friend Libor. The “Pintele Yid” – that Jewish essence that exists deep down in every Jew - in Sam Finkler cannot be silenced, despite his anti-Semitic posturing and despite his intermarriage. One of my favorite scenes in the book was when Finkler was addressing another anti-Israel audience, and was suddenly filled with rage when a non Jew stood up to accuse the Jewish State of being an inherently racist. He shocked himself as well as the audience when he railed: “How dare you, a non-Jew . . . how dare you even think you can tell Jews what sort of country they may live in, when it is you, a European Gentile, who made a separate country for Jews a necessity?” Finkler, like Jews throughout history, ran for a while, but ultimately could not hide. He could not continue to repress his Jewish soul permanently.

Sam and Libor never knew enough to embrace their Jewish heritage in a way that is joyful or spiritually uplifting.

Despite the brilliance of Jacobson’s writing and its often wicked humor, The Finkler Question is ultimately a sad book, in which Sam and Libor never knew enough to embrace their Jewish heritage in a way that is joyful or spiritually uplifting. Neither displays the kind of moral or spiritual grandeur which Julian so longs to see and in some vague way, attach himself to. When Sam assumes responsibility to say Kaddish for his friend, it is out of grief and perhaps guilt, not out of the search for meaning or transcendence. Many readers might find the book a slow read due to its lack of dramatic action, and find its profane language offensive. Still, Jacobson has focused a sharp and sometimes searing light into how Jews often wrestle with their religious identity, as well as with their relationship with Israel.

But who knows? Truth is always stranger than fiction, and as many real-life Jews have discovered, the practice of saying Kaddish is only the first stepping stone toward a more spiritually connected, even joyful relationship with Judaism. Maybe Howard Jacobson, a master of irony, might consider this prospect for Sam Finkler, and let us revisit him in a sequel.

Brave
In the Shadow of David and Goliath
Where Do the Laws of Nature Come From?
Saadiah Gaon, Rashi and Maimonides: How Three Rabbis Revolutionized Judaism
Comments