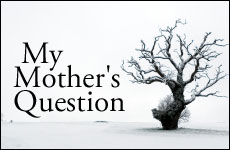 Why did I survive when so many others were killed?

"Why me? Why did I survive when so many others were killed?"

That was my mother's concluding question, the first time she told me the story of Kielce. She is a Holocaust survivor, whose family in Poland was "lucky" enough to be banished to Siberia as they crossed the border into Russia, instead of being sent to the concentration camps when World War II began. 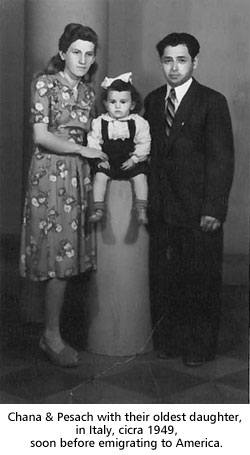 By the time the war ended in 1945, my mother had watched both of her parents, two brothers, and one sister die slowly from exposure, starvation and disease. She and two of her surviving siblings -- her oldest sister Esther, and her youngest brother Nissen -- then began making their way back to their home town in Poland, a shteitl named Ostrov Maziovechi, about 100 kilometers from Warsaw. At the time, they mistakenly believed that if they could just get back home, they would recover some part of their old lives.

As they traveled southwest from Siberia to Poland, my mother and her siblings joined up with a larger group of Jewish refugees, mostly Holocaust survivors. The group, riding in a canopied truck, eventually grew to about 50. Whenever they could, the group would stop and rest in a town or village willing to provide them with food, water and a place to sleep. Kielce was one of the towns in Poland where the group stopped one afternoon, on July 3, 1946, requesting shelter. It had a "kibbutz" on the second floor in the "Jewish building" at the center of town. The building housed Jewish soldiers, former prisoners of concentration camps, and Zionists who were waiting for an opportunity to leave Poland for Palestine.

During the journey, my mother and her siblings were befriended by two young Jewish men who had been conscripted into the Russian army during the war. They were also hoping to return to their home towns in Poland. One, named Pesach, would later marry my mother, Chana, and become my father. The second was Mendel, who would marry Esther and become my uncle. For some reason, that small group of five had ended up at the back of the truck. As they waited for the other passengers to disembark, they heard the chairman of the Jewish Committee in Kielce, who was also a resident of the Jewish house, counting heads.

"No, please!" my mother begged. "We're hungry and exhausted. Please let us stay."

"…38, 39, 40. That's it! The remaining ten must get back on the truck; we have no room for any others in the kibbutz. The driver will continue on to the next kibbutz, and you can get out there."

Those remaining 10 included my mother's group of five. She and her siblings immediately began protesting loudly. "No, please!" my mother begged. "We've been riding in the truck for two days. We're hungry and exhausted. Please let us stay."

Nissen, age 15 and recovering from illness, began crying bitterly, as Esther also implored the man in charge. "We're not asking for beds. We'll be happy to sleep on the ground -- just let us stay! Please, don't put us back on that truck."

The camp leader was moved by their tears and entreaties, but he had little choice; even the 40 additional refugees he had accepted would strain the facilities. But these children and young adults looked so starved and frail. Their faces were still haunted by the terrors they had undergone. He couldn't send them away without at least one meal and a few hours of rest. 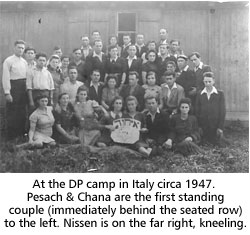 "You can join us in the dining hall for dinner. But the 10 of you will have to leave before nightfall. I'm sorry, we just don't have the space to keep you overnight."

The tearful siblings and their two friends, along with the other five, stayed at the Jewish house for a few hours, replenished themselves with food and rest, and dejectedly returned to the truck that evening. They left Kielce, as ordered, before nightfall and resumed their journey.

My mother and her small group heard the terrible news a few days later. The morning after their departure, on July 4, 1946, the Jewish house in Kielce was attacked. Poles had circulated a rumor that Jews had kidnapped and murdered Polish children in the house. The ensuing pogrom, involving the Polish police, soldiers and a large mob of Polish citizens, resulted in the murders of the chairman of the Jewish Committee and dozens of the residents of the house. Many of the Jewish refugees who had remained at the house that night -- when my parents and their small group were denied shelter -- had been slaughtered. My mother, her two siblings, and the men who were destined to become my father and my uncle -- all of whom had managed to survive the horror of the Holocaust -- had now miraculously survived the post-war pogrom of Kielce. 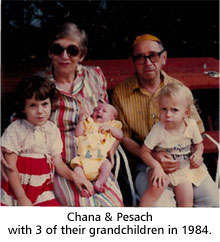 "Why me?" asked my mother. "Why did I survive the Nazi invasion when most of the Jews in my village perished? Why did I survive Siberia when most of my family died there? And why was I one of the fortunate few to be turned away from Kielce when the others who remained that night were killed? Why?"

When I heard the story and her question the first time, I was still a child, and my mother tried to answer it herself. "Maybe God allowed me to survive so that you and your sister could be born." In my youth, her answer delighted me with the notion that our existence could be so important to the world.

Guilt had nothing to do with it. She simply believed that she was allowed to survive because her life had a purpose.

As a teenager, I sometimes wondered whether my mother’s question was aroused by feelings of "survivor's guilt" -- she survived while others perished. As I matured, however, I realized that guilt had nothing to do with it. She simply believed that she was allowed to survive because her life had a purpose, and she strove to fulfill her goals with enthusiasm and passion.

She and her siblings grew up in poverty in prewar Europe, and in order to ensure that her daughters in America would grow up with all the necessities, she worked in a factory full time to supplement my father’s income as a tailor. The formal Jewish education she received in her shteitl in Poland was limited to learning how to read in Hebrew so that she could pray using a siddur. For her daughters in America, she scraped together enough tuition money to enable us to receive a Jewish education through high school, so that we could not just read but understand the Hebrew prayer book, and benefit from learning all aspects of Judaic studies. Although Jews in anti-Semitic Poland were denied a higher secular education, she made sure that her daughters received college diplomas. She didn't utter a word of complaint; my mother was grateful for the opportunity to work hard so that she could strive to achieve her goals. 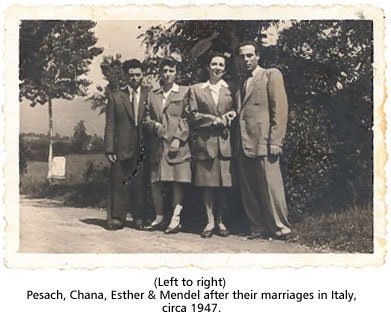 My mother is now in her late 80s and continues to ask that question each time she recounts surviving the Holocaust and the Kielce pogrom. What I now find remarkable about her question is that it focuses on her survival rather than on the tribulations she suffered. She could easily ask -- and nobody would blame her for doing so -- why she was punished by having to endure the Holocaust, lose her family and friends, be exposed to the horrific conditions of the Nazi invasion of Poland, the brutal anti-Semitism, and the harshness of exile in a work camp in Siberia.

Of course, she does occasionally raise the question of why the Holocaust occurred, as she struggles to reconcile such an incomprehensible tragedy with her belief in God who is good, loving and in control of the world and each of its inhabitants. 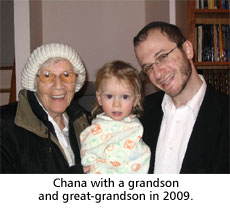 But it is precisely this belief that moves her to ask the other question more frequently, focusing on her miraculous survival rather than her tragic, heartbreaking experiences. As she strives to understand the reason for her survival and the purpose of her existence, she is comforted by the knowledge that -- although she lost her father in Siberia all those years ago -- her Heavenly Father has always been with her.

With my mother's question, she has taught me to acknowledge that while we often cannot understand the reason for tragedies, we can still see the Almighty as a constant presence in our lives, and appreciate all the miracles -- whether they appear in the guise of the ordinary or the sublime -- that He constantly bestows upon us.

The Abortionist of Auschwitz
Why Are The Prayers Of Yom Kipur So Repetetive?
Ha'azinu 5783: A Time for Unity!
Twisted Thinking
Comments