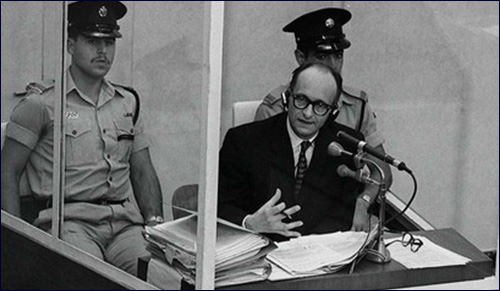 Hannah Arendt was wrong. Eichmann wasn’t a mediocre bureaucrat embodying the banality of evil. He was a fanatically dedicated Nazi.

Finally we know the truth. The furious and long debate has just been conclusively resolved. Hannah Arendt’s famous depiction of Eichmann, mastermind and implementer of Hitler’s final solution for the Jews, as nothing more than a mediocre bureaucrat embodying the banality of evil can at last be consigned to the junk heap of historical interpretation.

And that has tremendous relevance for the way in which we ought to view our contemporary threats to civilization.

It was at the time when Israel managed to bring Eichmann to trial – a trial meant to showcase the horrors of the Holocaust and preserve testimony of its unspeakable crimes – that Hannah Arendt posited a theory about the Nazi head of its genocidal program. In a small book published more than 50 years ago titled “Eichmann in Jerusalem: A Report on the Banality of Evil,” Arendt spearheaded a movement to reshape the way people thought about the Holocaust as well as those responsible for its almost incomprehensible evil. For her, Eichmann was not the malicious organizer of the Nazi death camps, as Israeli prosecutors charged, but rather a mediocre bureaucrat, “a leaf in the whirlwind of time,” as Arendt put it, “not a monster” but “a clown.” Hence the enduring phrase from her book’s subtitle: “the banality of evil.”

Arendt couldn’t believe that Eichmann was anything more than an efficient cog in the machinery of the willful murder of six million innocents. As an intellectual with a penchant for snobbish disdain of other people’s intellects, she assumed that Eichmann’s “modest mental gifts” would allow him to be no more than “an unimaginative clerk mindlessly carrying out the mandates of his superiors.” By dismissing him as a non-entity in reporting his trial, Arendt replaced Eichmann’s evil character with a far more forgivable persona as meek follower of a system far beyond his control.

Like so many other liberal thinkers when confronted with evil in pure and unadulterated form, Arendt simply couldn’t accept its reality without finding some extenuating excuses that would diminish culpability.

And now we know without a shadow of doubt that Arendt was totally wrong.

In a newly released book in translation from the German, “Eichmann Before Jerusalem: The Unexamined Life of a Mass Murderer,” Bettina Stangneth records the results of her voluminous research into newly discovered memoirs and other testimony by Eichmann produced while living in hiding in Argentina after the war. Reading it is to come away with the certainty that Eichmann wasn’t the order-following functionary he claimed to be at his trial, but a fanatically dedicated Nazi.

In 1957 in Argentina, a former SS officer named Willem Sassen interviewed Eichmann at length. The tapes, which were rediscovered only a few years ago, reveal Eichmann boasting that he had helped draft the letter ordering the Final Solution and that several times, he refused requests from fellow officers to free a favored Jew.

“I was not just a recipient of orders. Had I been that, I would have been an imbecile. I was an idealist.”

“I worked relentlessly to kindle the fire,” he says. “I was not just a recipient of orders. Had I been that, I would have been an imbecile. I was an idealist.”

For Arendt, “His [Eichmann’s] inability to speak was closely connected with an inability to think, namely, to think from the standpoint of somebody else.” Eichmann testified that he was just doing his job, unthinkingly, and Arendt believed him. Stangneth has uncovered countless proofs of Arendt’s naïveté. At the time of the trial, Eichmann expressed no remorse for his role; indeed he proudly exclaimed, “I will gladly jump into my grave in the knowledge that five million enemies of the Reich have already died like animals.” Arendt explained that away as mere boasting. Voluminous materials uncovered by Stangneth document not only Eichmann’s complicity but the decisive part he played as instrumental architect of the Nazi program for genocide of the Jews.

What we can now say with assurance is that evil incarnate should never be mistaken for a banal facsimile. Eichmann was Eichmann just as Hitler was Hitler. No amount of liberal apologia ought to whitewash their crimes or their character just because we find it difficult to imagine the existence of such depravity or the capacity for such evildoing.

Evil incarnate should never be mistaken for a banal facsimile.

It is a symptom of Western innocence that refuses to acknowledge comparable threats to civilization from contemporary Islamic extremism. Hamas makes clear in its charter that its ultimate goal is not only the removal of Israelis from their land but their complete and total annihilation – and many still persist in the naïve belief that this must be mere rhetorical exaggeration. ISIS speaks openly of its intention to put to the sword all infidels and create a universal caliph, and our civilized mindsets refuse to give credence to the kind of evil that is beyond our imagination.

Our society, just like Hannah Arendt, is capable of accepting the possibility that people can become mindless bureaucrats of goals antithetical to our values. We fail however to grasp the extent to which evil can find followers like those who presently threaten the survival of the world.

Woe to us if we persist in thinking that ISIS and its Islamic partners are no more than “banal” clowns, easily dismissed as serious threats to a great power like the United States of America. They are pure evil, and the Torah has already told us long ago in no uncertain terms “And you shall eliminate evil from your midst.”

Where Have All the Good Jewish Men Gone?

Living for Your Résumé ... or Your Eulogy

Why Were the Graves of So Many Jewish GIs Marked by a Cross?