The Terrorist Attack in France 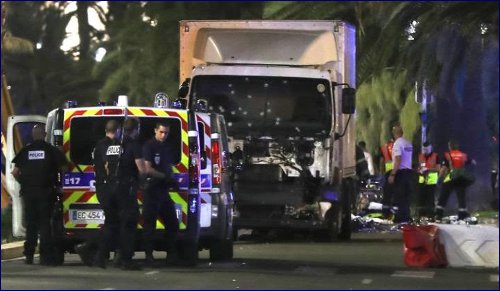 It seems that nowhere is safe. How do we live in these times of uncertainty?

At 10:30pm Thursday a huge truck plowed into a crowd of people watching the Bastille Day fireworks in Nice, France killing over 80 people and seriously injuring dozens more. After the terrorist drove over dozens of people, he emerged from the truck and began to shoot until he was shot dead by police. The official death tally is still unknown, but what we do know is that this is a tragedy of horrific proportions. It comes at the end of a week of senseless violence and tension in America. And it comes at the end of a week of continuing terrorist attacks and fear in Israel.

What do we do when nowhere is safe anymore? When sitting down to watch fireworks with your children is risking your life? When the horror and the violence never seem to end and no one knows what to say anymore?

We read the news with a mixture of shock and trepidation. It is so awful that it silences us with the sheer terror of our helplessness. The terrorists seem to be anywhere and everywhere. The violence is so frightening, we feel like we are frozen in place. Where is it safe? What do we do? What can we say? Where can we find certainty in this shaken, upside down world where mass killings are becoming weekly news?

The truth is that we can't find that certainty, that safety, that reassurance anywhere anymore. And perhaps the certainty that we used to have was illusory to begin with. The truth is that none of us is ever guaranteed another tomorrow. And this latest, horrifying attack reminds us once again that uncertainty in life is a given; the real choice we each have is how we face that uncertainty.

Motivational speaker Les Brown tells the following story about having the courage to face the unknown:

A prisoner of war was once told by a head guard: “You have a choice. Either you can go in front of the firing squad tomorrow morning or you can walk through that door over there.” The head guard pointed at a blue door at the back of the room.

“What’s behind the door?” The prisoner asked.

“Unknown horrors.” The guard answered. The prisoner thought for a moment and then replied.

“I’ll take the firing squad.” The next morning after the prisoner was shot, another guard asked the head guard.

“What’s really behind that blue door?” And the head guard replied.

“Freedom. But not many people choose that door. They would rather die than face the unknown."

There's a blue door for each of us. Behind it is life with all its joys and sorrows and unknowns. When faced with the news of another terror attack, many of us would like to swipe away the news from our phones or look away from the newspaper. We don't want to face the reality of the pain of each one of the victims murdered. We don't want to think about what "seriously injured" means and how hundreds of people will be disabled now for life. But most of all, many of us do not want to face the fear that these acts of terror bring into our lives. We don't want to walk through that door where our lives are also uncertain, unknown, laid out before us with no promises, no guarantees of tomorrow.

But that door is where freedom is. Walk through and face the horrors. Feel the pain of hundreds of people in France and hundreds more across the world who have lost loved ones without warning. Take a moment to pray for them before swiping the news off our phone or turning away from the headlines.

The one remaining certainty we have is freedom.

Opening that door to facing the unfathomable horror that mankind is capable of is the only way to appreciate the depths of kindness that we can reach. Trying to weave an illusion of safety around our lives and ourselves won't work anymore. As long as we are silent in the face of evil, as long as nations try to cling to the past when families could watch fireworks without fear of being plowed over by a truck, we are all in danger. And if we are not stepping up and opening that door in our minds to both the known and unknown horrors all around us, we are not choosing freedom.

Let us walk through that door together. May God comfort those who have lost loved ones in the terror attack in France and heal all those who were injured.

9/11 Heroes and Memories
The Promise Of The Land
Which Chat Are You On?: Parshas Behar/Lag Ba’Omer
Do You Like Slow-Cooked Food? Thank the Jews
Comments
MOST POPULAR IN Society
Our privacy policy