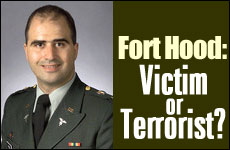 Medicalizing mass murder not only exonerates. It turns the murderer into a sympathetic victim.

What a surprise -- that someone who shouts "Allahu Akbar" (the "God is great" jihadist battle cry) as he is shooting up a room of American soldiers might have Islamist motives. It certainly was a surprise to the mainstream media, which spent the weekend after the Fort Hood massacre playing down Nidal Hasan's religious beliefs.

"I cringe that he's a Muslim. . . . I think he's probably just a nut case," said Newsweek's Evan Thomas. Some were more adamant. Time's Joe Klein decried "odious attempts by Jewish extremists . . . to argue that the massacre perpetrated by Nidal Hasan was somehow a direct consequence of his Islamic beliefs." While none could match Klein's peculiar cherchez-le-juif motif, the popular story line was of an Army psychiatrist driven over the edge by terrible stories he had heard from soldiers returning from Iraq and Afghanistan.

They suffered. He listened. He snapped.

Really? What about the doctors and nurses, the counselors and physical therapists at Walter Reed Army Medical Center who every day hear and live with the pain and the suffering of returning soldiers? How many of them then picked up a gun and shot 51 innocents?

And what about civilian psychiatrists -- not the Upper West Side therapist treating Woody Allen neurotics, but the thousands of doctors working with hospitalized psychotics -- who every day hear not just tales but cries of the most excruciating anguish, of the most unimaginable torment? How many of those doctors commit mass murder?

It's been decades since I practiced psychiatry. Perhaps I missed the epidemic.

But, of course, if the shooter is named Nidal Hasan, who National Public Radio reported had been trying to proselytize doctors and patients, then something must be found. Presto! Secondary post-traumatic stress disorder, a handy invention to allow one to ignore the obvious. And the perfect moral finesse. Medicalizing mass murder not only exonerates. It turns the murderer into a victim, indeed a sympathetic one. After all, secondary PTSD, for those who believe in it (you won't find it in DSM-IV-TR, psychiatry's Diagnostic and Statistical Manual), is known as "compassion fatigue." The poor man -- pushed over the edge by an excess of sensitivity.

In such cases, political correctness is not just an abomination. It's a danger, clear and present.

Have we totally lost our moral bearings? Nidal Hasan (allegedly) cold-bloodedly killed 13 innocent people. His business card had his name, his profession, his medical degrees and his occupational identity. U.S. Army? No. "SoA" -- Soldier of Allah. In such cases, political correctness is not just an abomination.

It's a danger, clear and present. Consider the Army's treatment of Hasan's previous behavior. NPR's Daniel Zwerdling interviewed a Hasan colleague at Walter Reed about a hair-raising grand rounds that Hasan had apparently given. Grand rounds are the most serious academic event at a teaching hospital -- attending physicians, residents and students gather for a lecture on an instructive case history or therapeutic finding.

I've been to dozens of these. In fact, I gave one myself on post-traumatic retrograde amnesia -- as you can see, these lectures are fairly technical. Not Hasan's. His was an hour-long disquisition on what he called the Koranic view of military service, jihad and war. It included an allegedly authoritative elaboration of the punishments visited upon nonbelievers -- consignment to hell, decapitation, having hot oil poured down your throat. This "really freaked a lot of doctors out," reported NPR.

Nor was this the only incident. "The psychiatrist," reported Zwerdling, "said that he was the kind of guy who the staff actually stood around in the hallway saying: Do you think he's a terrorist, or is he just weird?" Was anything done about this potential danger? Of course not.

Who wants to be accused of Islamophobia and prejudice against a colleague's religion?

One must not speak of such things. Not even now. Not even after we know that Hasan was in communication with a notorious Yemen-based jihad propagandist. As late as Tuesday, The New York Times was running a story on how returning soldiers at Fort Hood had a high level of violence. What does such violence have to do with Hasan? He was not a returning soldier. And the soldiers who returned home and shot their wives or fellow soldiers didn't cry "Allahu Akbar" as they squeezed the trigger.

The delicacy about the religion in question -- condescending, politically correct and deadly -- is nothing new. A week after the first (1993) World Trade Center attack, the same New York Times ran the following front-page headline about the arrest of one Mohammed Salameh: "Jersey City Man Is Charged in Bombing of Trade Center."

Ah yes, those Jersey men -- so resentful of New York, so prone to violence.

Richard Dawkins and Eugenics
Who Was Josephus? The Controversial Backstory of the Famed Historian
Should I Break Up, Get Engaged or Keep Dating?
Time Is Your Precious Commodity
Comments
MOST POPULAR IN Current Issues
Our privacy policy