The Oldest Man in America 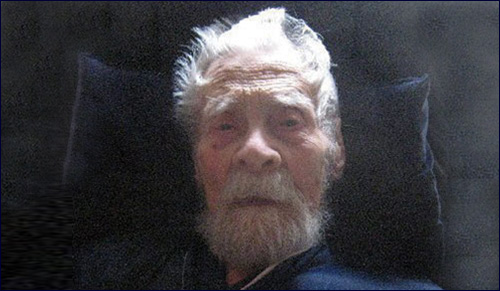 My unforgettable visit with Alexander Imich who recently passed away at 111 years old.

Rabbi Pinny Marozov, director of Chabad of Coney Island, wanted to do a mitzvah. So when he found out there was a Jewish man living on his own on the Upper West Side of Manhattan – a Jewish man who was about to turn 111 years old – he decided to pay a visit.

The problem was that Alexander Imich, who has been officially verified as the oldest man in America, second oldest in the world (he was even congratulated by the New York State Senate upon his 110th birthday), was not at home. Imich, who had taken a fall in his apartment and was not found until the next day when a volunteer came to check on him, was in Roosevelt Hospital in Manhattan. Rabbi Marozov, undeterred, visited him there and helped him put on tefillin to pray. The rabbi planned a home visit to hang up a mezuzah in Imich’s apartment, and agreed to bring me along.

Imich was born in 1903 in Poland, where he later earned his Ph.D. in 1927, despite the best efforts of anti-Semitic professors to sabotage his thesis.

Imich was born in 1903 in Poland, where he later earned his Ph.D. in 1927, despite the best efforts of anti-Semitic professors to sabotage his thesis. He embarked upon a journey that led him through two world wars, the Holocaust, two years in a Russian labor camp near the White Sea, and finally a new life in America in 1952 (with his wife, Wela, who passed away in 1986).

He worked as a chemist and respected scientist, ultimately trying to prove to other mainstream scientists that the neshama (soul) survives physical death, editing and publishing a book, Incredible Tales of the Paranormal, (in 1995, at the age of 92), expounding on this theme and earning high praise from Uri Geller, the celebrated illusionist, as “the most fascinating and unusual book I have ever read in this field [penetrating] the unknown with the support of many testimonies.”

(Uri Geller, reached via e-mail, commented: “I met Alexander Imich in 1972 when I came to the United States from Israel. I found him to be the most amazing person I have ever met. His interest and curiosity in mind power, the paranormal, and psychic phenomenon – from the scientific point of view – was beyond belief. He is an intellect; a man with super knowledge of the beyond and the infinite. I consider him to be a genius! It was from him that I heard the words, ‘Space is not the last frontier; the mind is.’ My only explanation for his longevity is that he knows the secret of how to extract pure energy from the universe and beyond. God bless him.”)

He suffered financial devastation after losing his life savings in the stock market, and then the loneliness of one who has no children, who has outlived all his peers and most family members, most of whom perished in Nazi concentration camps. His grandniece, Karen Bogen, on his wife’s side of the family says that Imich does have some living, blood relatives: “He has a nephew, Jan Imich, who has children and grandchildren. A few weeks ago, Jan visited with his son and grandson, so we had four generations together. Jan and his extended family live in England.”

Alexander Imich’s 111th birthday took place on Feb. 4, while he was in Roosevelt Hospital. A few days later, he returned home to the same apartment he and Wela had rented in 1965 – weak, with failing eyesight due to macular degeneration and practically deaf – as the hospital had lost both of his hearing aids.

Imich was reportedly in a state of despair, no longer being able to hear and communicate with others, expressing something he had never said in all his 111 years – that he wanted to die, already. And then he stopped eating.

Nevertheless, we planned a bikur cholim visit to Imich. At the time, we had no idea that Bogen, who lives in Rhode Island, was working on getting the hospital to make good on the lost hearing aids and getting an audiology team from Mt. Sinai Hospital to fit him for new ones.

Before visiting, I called the house expecting a volunteer to answer the phone and confirm that it was okay for Imich to have visitors. Instead, Imich himself answered: “Hello? Hello? I’m all alone here. Is anybody coming to be with me?”

He couldn’t hear anything I said in reply. This was so alarming that I telephoned one of the regular volunteers, who told me that there was a two-hour gap between when the morning volunteer leaves and the afternoon volunteer arrives.

A Self Help organization volunteer was there by the time Rabbi Mazorov and I arrived at the Esplanade apartment house. After being told that Imich was so distraught he had stopped eating altogether, we almost cried to see him happily munching on one of the huge freshly baked black and white kosher cookies we brought him.

Imich, who is reportedly “not religious,” seemed to light up even further when Rabbi Marozov helped him put on tefillin and then affixed a mezuzah to his doorpost. We were surprised and touched to the core when Imich, in a strong clear voice, recited the Shema prayer, which he apparently knew by heart.

“Look at this,” said the rabbi. “This is bringing up a spark from deep inside him. He’s coming back to life.”

He let us take many photographs. “People are always taking my picture, but they never send them to me.” We assured him we would be back with copies of the photos taken.

“He is scheduled to get fitted for new hearing aids tomorrow,” the volunteer told us. The completed appliances will take some time to be delivered, she said; maybe two weeks. We had to shout and repeat ourselves in order for Imich to hear us, but communication was possible.

He asked me, “Do you know that I am the oldest man in the United States and the second oldest in the world?” I told him yes. And again, louder, ”Yes!”

I asked him if he had a bar mitzvah. A what? “Bar Mitzvah!”

Imich and his wife survived because they were deported to a Russian labor camp instead of Auschwitz.

We originally thought when the rabbi visited him in the hospital and helped him to put on tefillin, that it was a first in his life experience – in essence, a bar mitzvah. We were mistaken. Imich remembered his bar mitzvah in one of the synagogues in Czestochowa, Poland, where he was born and grew up, but unfortunately, he said, all the photos and documentation were lost. When the Nazis marched into Poland, the entire Jewish world was lost. Imich and his wife Wela survived because they were deported to a Russian labor camp instead of Auschwitz.

I told him my father’s mother came from Czestochowa, but she referred to it as Chenstokhov. “That’s right,” he said, “Chenstokhov.”

Though attentive, interested and clearly wanting to engage with us, Imich was straining to hear and each short exchange had to be repeated slowly and loudly several times. With twinkling eyes, he pointed out, “You imagine that I can converse with you like a normal person?” – a reference to his near, but not total deafness.

I answered that I didn’t know what was normal, but I would like to come back and visit again. “Can I come see you again?” He smiled slightly and said yes “but bring the pictures!”

We rose to leave and the rabbi said, “Good Shabbos!” which was answered in kind, with an explanation. “I don’t know Yiddish,” he said, “but I remember from my parents.” The memory breaking through was nearly 100 years old.

I looked back at the cluttered apartment – the walls completely covered with his late wife’s paintings, the bookshelf with a copy of Tales of the Paranormal, edited by Alexander Imich, Ph.D., the “Do Not Resuscitate” letter hanging on the wall outside the kitchen, cards commemorating his recent February 4 birthday, two computers that haven’t been used in a year due to Imich’s failing eyesight and no television set anywhere in sight.

The 111-year-old, blue-eyed man with paper thin skin stretched tight across his bones sits on a recliner, his legs wrapped in a blanket, facing a clock hanging on the wall, nestled there between the paintings. It reminded me of the lyrics in the Jacques Brel song from a long time ago, about old folks and their clocks: “It tick tocks oh so slow. It says yes, it says no. It says ‘I’ll wait for you.’ The old, old silver clock that’s hanging on the wall that waits for us all.”

In a speech he gave at the age of 99, Imich said: “In my life, I have witnessed the development of flight, the automobile, electrification of nations, the telephone, the radio and television, atomic energy, the wonders of bioscientific medicine, computer technology, great advances in our knowledge of the cosmos, men walking on the moon – the list could go on and on.”

However, on answering the question (to the satisfaction of modern scientists) on whether consciousness survives the death of the physical body, he says, in his book, “Imagine for a moment how much human life would change if this question were answered in the positive, how much easier it would be to live through the pain and misery of our existence on this planet, if we were sure these were only temporary ills.”

UPDATE: Two days after this story was published in The Jewish Press, a seeming miracle occurred. Dr. Imich was suddenly given 24-hour home attendants to insure his recovery (whereas before, he was left alone for hours at a time to fend for himself); his hearing aids were replaced by Mt. Sinai Hospital's audiology team (after Roosevelt Hospital lost them, resulting in his being sent him home weak and nearly deaf) and so many people who had read the story began visiting him in the spirit of friendship and kindness – that visiting hours had to be set (from 12 noon till 5pm). However long Dr. Imich may live, we thank God he is no longer mired in anguished depression, wishing to die.

The Hidden Message in Hinei Ma Tov
Why My Iranian Mother Didn’t Want Me to Become a Religious Fanatic
The Jewish History of Prague
Why the Sexual Revolution was Bad for Women
Comments
MOST POPULAR IN Israel
Our privacy policy
Aish.com Is Looking for Great Writers