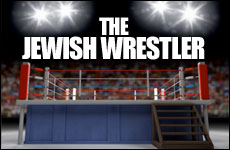 Greg Herman has stepped back in the ring.

Stop in at the Gann El auto repair shop in Atlanta and you’ll be greeted with an ear-to-ear smile by owner Greg Herman. Take a look around the shop and you’ll find plenty of broken cars and the tools to fix them. Nothing in the shop gives away Greg’s previous life, except of course the full-size wrestling ring tucked away in a back corner. 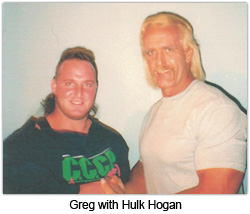 For seventeen years Greg was a professional wrestler. He went by the name Demon Hell Storm and wrestled with everyone from Hulk Hogan to Ricky the Dragon and Sergeant Slaughter. But his journey back to his roots has been more exciting than any match in the ring.

Greg was born in 1964 and grew up in Miami. His mother was one of the top educators in the Reform movement.

Over the next 17 years he wrestled on TV and for live audiences across the U.S. and around the world.

Greg always knew he would be a wrestler. He’s five-foot-ten and at the height of his career weighed 265 pounds with only 3 percent body fat. He had the stamina and determination to be a wrestler, but waited for years after high school for his break. After seeing no success, he tried instead to become a professional body builder.

Finally one day as he was lifting weights in a gym in Florida he was approached by Bob Roop, who had won a Silver medal in the Olympics in wrestling and was now the owner of the Global Wrestling School. He asked Greg if he would be interested in becoming a professional wrestler. Greg jumped at the chance.

Greg joined the school and learned all the techniques of professional wrestling. He soon signed a contract with the Global Wrestling Federation. Over the next 17 years he wrestled on TV and for live audiences across the U.S. and around the world, for the GWF and other federations.

Though he initially loved the excitement and glamour of professional wrestling, the job quickly lost its luster.

“After about six months, it was a job. I had to be in a different city every single night of the week. I was always traveling, never in one place for very long. It became a job and it wasn’t fun any more,” Greg said. “But it beat the heck out of working 9 to 5, and it paid a lot more money.”

On the mat he was a match for almost every competitor, but outside the ring he had a harder time dealing with them. Every night he traveled to a different state with his fellow wrestlers, many of whom were former criminals who had become Born Again Christians. On bus trips they taunted him about his religion and tried to get him to become a Christian.

“I felt at that point in my life I needed to know who I was so I could rebut their claims,” Greg said.

"I needed to know who I was so I could rebut their claims.”

Greg grappled for answers, and spoke over his religious questions with his parents. One day as he was approaching his 30th birthday, his parents asked him what gift he wanted. They were shocked at his answer.

“I said I wanted a Tanach, a bible. My mom almost had a stroke,” Greg said.

So his parents sent him a copy of an English Tanach and he began pouring over it to look for answers.

In 1996 Greg suffered a career-ending injury: in the middle of a match he tore his bicep and pectoral muscles in his right arm. During his recovery, he fell back on the other trade he knew well: fixing cars. He took a job in a Florida mechanics shop.

A few months later a customer came into the shop. He was dark skinned and something about him stood out. Greg assumed he was a Black Muslim. Greg badgered the man about being Muslim. To his surprise, the man told him he was actually Jewish (he was an Orthodox Jew from Yemen). The man then gave Greg a ribbing of his own.

“What are you?” the man asked.

“Then why isn’t your head covered?” the man asked.

“Why should I cover my head?”

“What are those?” Greg asked.

Sunday morning came and Greg met the man at his Orthodox synagogue. The members were all aging, straight-laced white-haired men. Greg looked out of place.

“You can imagine what guys there thought. I showed up at synagogue, driving a jeep with 40-inch tires, a winch on front, all covered in mud. I was wearing a sweatshirt, but they could see my 200 pound frame. My hair was down my back tied in ponytail,” Greg recalled. “The guys were scared of me! They didn’t even believe I was Jewish.”

Despite their initial reactions, the synagogue members quickly welcomed Greg. He began coming every week and soon began to feel at home. He slowly began keeping mitzvot and learning more about his heritage.

Greg’s role models used to be famous wrestlers. Now they're the average Jews who do kindnesses for each other.

A few years later Greg moved to Atlanta and opened his mechanics shop. He began studying with a local rabbi and joined a local Orthodox synagogue.

Greg’s role models used to be famous wrestlers. Now his role models are the average Jews that he sees on daily basis doing kindnesses for each other.

Greg now tries to live a life based on the Jewish values he sees all around him. He goes out of his way to help organizations and people in his shop, even when they cannot afford to pay. He frequently hosts fundraising events for local Jewish charities, most notably running wrestling tournaments. It’s for those events that he carts out his old wrestling ring.

In the ring Greg still moves with speed and agility. Watching him, it’s easy to imagine him in his former life. But the kippah on his head is an indication that life is just a little different now.

Losing Ben
What Makes Eli Run?
The Tyranny of Materialism
Science Enters the Mysterious Inner World of Consciousness
Comments
MOST POPULAR IN Spirituality
Our privacy policy

What Makes Eli Run?
The Tyranny of Materialism
Science Enters the Mysterious Inner World of Consciousness
BBQ Bourbon Cheese Kugel Recipe
Korach 5782: Visit to Lift the Spirit
That Time The Ivy League Found A Way To Limit Jewish Enrollment
Would You Rather Be Right or Happy?
Korach’s Unique Punishment
Who Was Josephus? The Controversial Backstory of the Famed Historian
Should I Break Up, Get Engaged or Keep Dating?
1 2 3 … 2,906 Next »