I Can Do That 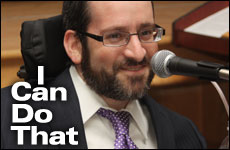 After a tragic accident that left him paralyzed, Rabbi Yehuda Simes inspires others to tackle life’s challenges.

If Passover cleaning has you down, you should really meet Rabbi Yehuda Simes. Three years ago, Rabbi Simes, a beloved teacher at Ottawa Hillel Academy was driving with his wife and seven of his eight children at the time when a deer appeared in the middle of the road suddenly. (Click here to read a full account.) Rabbi Simes’ wife swerved to avoid the animal, causing the family van to spiral out of control. Miraculously, none of the children or Rabbi Simes’ pregnant wife Shaindel were seriously hurt. Tragically, Rabbi Simes was left paralyzed. “I must have crushed my spinal cord,” Rabbi Simes recalls. 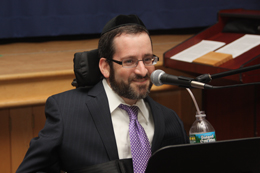 For the past three years, Rabbi Simes has remained in Ottawa Canada, focusing on his physical rehabilitation and helping his family adjust to the “new normal.” But now he is ready to make a step in a new direction – inspiring others, or in other words, “rehabilitating” their faith.

The Passover season gives people the ability to break out of their own personal slavery.

“I got a phone call from Rabbi Sholom Hirsch Adler,” Rabbi Simes recalls, referring to the Kashrus Administrator of COR-Kashruth Council of Canada, Canada’s largest kosher certifier. “Rabbi Adler asked me to come to Toronto and speak at COR’s annual Pre Pesach lecture. I was honored, but physically, I said that it was just not possible.”

COR began making arrangements for Rabbi Simes to appear via a live video hookup. But if the Passover season gives people an ability to break out of their own personal slavery, then Rabbi Simes tapped into that strength. “The next morning Rabbi Simes called me,” Rabbi Adler relates, “And said, ‘Rabbi Adler, I’m coming.’”

The trip for Rabbi Simes was arduous. He had to travel in his specially equipped van with two attendants. He needed to stay in a special hotel room with a hospital bed and a hoist. “But it was all worth it,” Rabbi Simes recalls.

Over three hundred captivated attendees listened as Rabbi Simes recounted the details of the harrowing accident and the weeks and months that followed. “In an instant, my life, my family’s life, was turned completely upside down.” 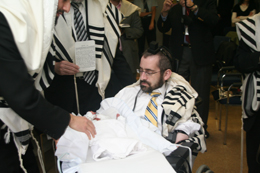 His wife Shaindel gave birth a few months later. “I was wheeled into the room and they gave me the baby… it was just a river of tears.”

Rabbi Simes has had both challenges and victories adapting to his new life. He had to learn anew how to breathe and swallow. “I’ve come to appreciate the blessing of swallowing,” he relates. Indeed, the first time after the accident that he was able to swallow by himself, his family brought him a Slurpee, his favorite, and they all danced in celebration.

As a few years have passed, Rabbi Simes has had time to reflect on his “accident” – although he does not view it that way. “I don’t look at it as an accident at all,” Rabbi Simes told the audience. Instead, he views what happened to him as an opportunity. An opportunity to inspire people with his story and remarkably, to strengthen his faith.

“I’ve always had faith,” Rabbi Simes recounted. “I understood things fairly deeply after studying for many years…. I may have understood it before, but to really know it now, I’ve grown immeasurably. It’s not a trauma at all. I’ve grown in my understanding of how God’s help was what I personally needed to meet my challenges, and that’s true of every single person on the face of this planet. “ 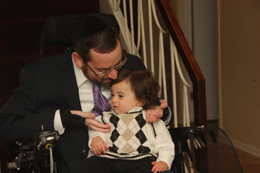 One of the audience members asked Rabbi Simes a seemingly awkward question. “Is there hope for the future with respect to any recovery?” Rabbi Simes seemed taken aback by the question – the strain showed on his face. The rest of the audience felt the tension. “What does that mean, ‘is there hope for the future?’” he asked rhetorically. “Of course there is hope! It’s not hope; it’s certainty that I will be able to live my life to the fullest potential, whatever that means.”

The Hagaddah writes that each person must see himself as if he personally left the slavery in Egypt. For Rabbi Simes, it is no different. While he may be enslaved in his body, his soul is free. “Today I am experiencing pure freedom.”

Rabbi Simes concluded by telling the story of the splitting of the Red Sea. With the Egyptian army approaching, the Jews were trapped. They were afraid. Their brief encounter with freedom appeared to be coming to an end. Until one man, Nachshon, the son of Aminadav, had the courage to begin walking into the water. He continued until the water was up to his chin, and only then did the sea split. “Only Nachshon looked life in the face and said ‘I can do that.’”

Rabbi Simes’ faith in God has given him the strength to say “I can do that.” “There was never a doubt about my faith. I was sure, I am sure, and I will be sure that everything that happened is for a purpose. There is a reason for everything.”

Every day since his accident, Rabbi Simes’ faith has given him the ability look life in the face and say, “I can do that.” This Passover, he wants you to say “I can do that” too.

A video of the Rabbi Simes lecture is available on the COR website here.

Safe in the City
Why Are The Prayers Of Yom Kipur So Repetetive?
Ha'azinu 5783: A Time for Unity!
Twisted Thinking
Comments