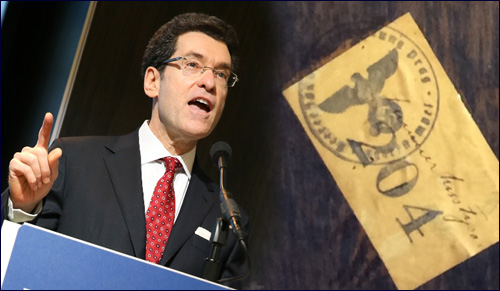 A mother leaves Prague in a cattle car; her son returns as a Sabbath-observant, US ambassador.

Norman Eisen met Barack Obama as law school classmates at Harvard University, where they became friends, remaining in touch even after their school days ended. When Obama eventually won the US Presidency, he appointed Eisen, in 2009, to serve as his Special Counsel for Ethics and Government Reform. Only a couple of years later, in 2011, the president tapped Eisen to be the US ambassador to the Czechs.

It was no coincidence that Obama chose Eisen to be ambassador in Prague of all places: “The president thought it would be a remarkable thing for the son of a Czechoslovak Holocaust survivor to return and represent the US… No one from my immediate family had returned since my mother fled Communism in 1949, and the symbolism of [returning there] was just too unique an opportunity to pass up.”

In 1944, Frieda – along with her parents, siblings, and other family members – was sent to Auschwitz. Although she and two siblings miraculously survived, their parents and other relatives weren’t as fortunate. 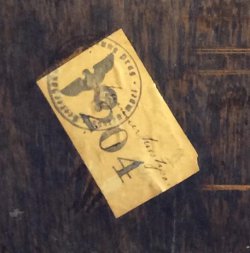 The Nazi insignia underneath the table.

On his first day as ambassador, following all of the formal greetings and arrival ceremonies, Eisen sat alone in the library of his new home reflecting on the events of the day. The head of the ambassador’s household, Miroslav Cernik, came into the room and informed the ambassador that there was something Cernik wanted to show him. Cernik led Eisen to a small, ornate table and asked Eisen to look underneath the table. The ambassador, who thought it a rather unusual request, complied nonetheless, and got down on his hands and knees, crawling under the table. Nothing could have prepared Eisen for what he found there: a sticker with the clearly discernable image of an eagle and a swastika, the formal symbol of the Nazi party, emblazoned upon it, thus marking the table as former Nazi property.

Cernik explained that he had not wanted Eisen to make the upsetting discovery for himself by chance. Eisen, who had envisioned carrying out the many responsibilities of his office, was unprepared for such a thing and described seeing the sticker as “a punch in the gut”, hitting him on an emotional, as well as a physical, level.

In an ironic twist, Eisen would later use that very table during his tenure as ambassador as the stand for his Chanukah menorah. 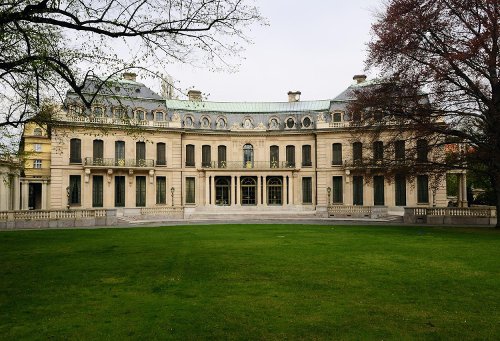 The Nazis were not the original owners of that table or that house. The US ambassador’s residence in Prague, named Petschek Villa, was originally built by a wealthy Jewish industrialist by the name of Otto Petschek in the late 1920s. Petschek, who made his money from coal mine holdings as well as banking, was one of the wealthiest men in Czechoslovakia, before his untimely death in 1934. With Germany’s designs for Czechoslovakia clear and the threat of an invasion on the horizon, Petschek’s family fled the country in 1938. The property was subsequently seized by the Germans and commandeered for use as the headquarters of the Wehrmacht (German armed forces) commander of Prague, General Toussaint, his staff, and other Nazi officials and aides during their seven-year occupation of Prague.

Occupied afterwards briefly by the Russians and then the Czechoslovak General Staff, the US leased the property in 1945 before eventually buying it from the Czechoslovak government in 1948. 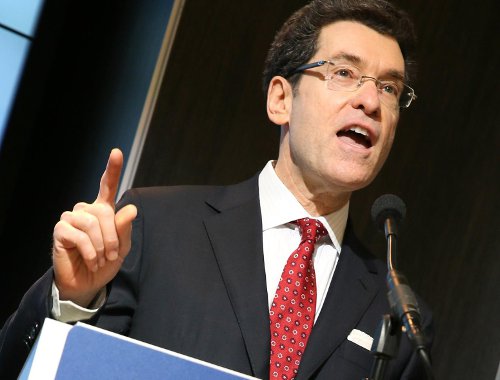 On his arrival at the Petschek Villa, Eisen had the home returned to its Jewish roots and made suitable for a Torah-observant Jewish family to live in, kashering the kitchens and affixing mezuzos to the doorposts of the residence where he and his family would be staying. The kitchen staff “went into overdrive mastering the Jewish dietary laws”, learning to make traditional Jewish foods like challah and matzah ball soup, and sourcing kosher products, especially a variety of kosher meats, which were unavailable in Prague and had to be ordered from either Berlin or Vienna.

Eisen and his family kept Shabbos in their new Czech home each week, sometimes in the company of various dignitaries and dining in a room and at a table that were once in the hands of the Nazis. As Eisen describes it, “It [was] mind-blowing, eating on kosher State Department china where the commander of the Nazi Wehrmacht used to live.”

The Nazis deported us in cattle cars and my son flew back on Air Force One.

Frieda opted not to return to her homeland, even when her son was there serving as the ambassador. She passed away in 2012, during her son’s tenure in Prague, but not without a “tremendous sense of triumph” at the fact that her son had returned to the country of her birth as the representative of the most powerful nation on earth. Frieda was fond of telling people, “The Nazis deported us in cattle cars and my son flew back on Air Force One,” a reference to a trip that Eisen made to Prague with Obama in 2010 for an international treaty signing ceremony.

Joe Lieberman testified regarding Eisen’s appointment in the US Senate: “It is indeed a profound historical justice…that the ambassador's residence in Prague, which was originally built by a Jewish family that was forced to flee Prague by the Nazis, [which], in turn, the Nazis took over…as their headquarters, now 70 years later, is occupied by Norman and his family. And I might, on a point of personal privilege, add that they observe the Sabbath there every Friday night and Saturday. So if you need any evidence that there is a God, I offer that to you.”

Eisen ended up serving in Prague for almost four years, one of the longest tenures of any recent US ambassador there.

I am indebted to Mordechai Luchins for bringing this story to my attention, and to ambassador Norman Eisen for kindly providing me with the sources for this story, as well as making the time to read it and offer suggestions and corrections. This article was adapted from the following sources:

Goldman, T.R.. “The World of Norm Eisen.” The Washington Post.

A Jewish Couple Saved a Church. Their Generosity Ended Up Saving Jewish Lives

77 Years After the Holocaust, A Family Reunion
Grilled Israeli Lamb and Veggie Kabobs Recipe
Pain is a Reality; Suffering is a Choice
The Promise Of The Land
Comments
MOST POPULAR IN Jewish Society
Our privacy policy