Holocaust at the Shabbos Table 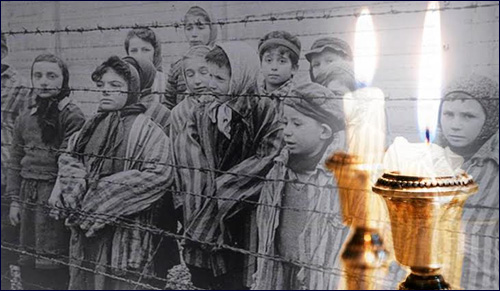 A Shabbos that was different from all others.

I learned about the Holocaust by virtue of being the daughter of two who lived the nightmare. I don’t think I could have had a more effective education about that agonizing period of Jewish history. The following story captures a moment in time of three Jews, my parents and I, struggling to move forward while carrying the weight of the unspeakable.

My parents and I are separated by the typical strains. Because of their history, the parental expectations and disappointments affect me more intensely than most. It all resurfaces after every call. I sit with a painful hole on my side of the phone click. But still I try: not to make them happy (I’ve realized that that is an impossibility), but to help them see who I am. Where there is talk, there is hope.

Every winter, I visit my parents in Florida. I make reservations at the last possible minute in an effort to postpone my anxiety about seeing them. I arrive feeling somewhat strong, with my ego intact. It always happens, though. By the third night of my four-day-visit, I am a broken and empty shell lying on the guest couch trying to find my pieces in time for the flight back to New York. It was on a recent trip down there that I decided that this would be the visit, after which I would leave the way I came. I didn’t. I came back better.

I arrived Friday morning. The Florida sun felt oppressive as I made my way through the crowded waiting area. I had no trouble spotting my parents. I could almost hear their waiting. We hugged hello, put my luggage into the car, and we were off. My parents live in a neighborhood where the palm trees bend low like the people who live there. Red-yellow-orange flowers blaze, driveways are lined with sleek pastel cars, and blood-scarred Holocaust survivors parade in Nike sweat suits, Adidas sneakers and leather faces.

I showered, washing off the travel soot, and I was ready to prepare for a Shabbos meal that I never experienced as a child. My parents watched curiously as I set two candlesticks down. My mother placed two of her own beside mine, something I had never seen her do. I lit the candles, covered my eyes and recited the traditional prayer welcoming in the Sabbath.

“I’ll say my own prayer,” my mother said with mock indignation. My father hurried out of the room and returned with a faded blue yarmulke in his hands.

“That’s really something, no?” my father’s eyes glimmered. My father’s eyes rarely glimmered. “This is the first time I’m using it since…” He lifted the yarmulke closer to my face. “Look at the writing inside,” he urged softly. My father’s Polish accent cracks me open every time. I tried to make out the chipped white letters inside the rim. Through squinted eyes, I read: “Jeffrey Kahn’s Bar Mitzvah…”

“I was just a kid when you went to that bar mitzvah,” I said.

“A pipsqueak!” he added. I vaguely remembered the boy. He was the son of one of my father’s childhood friends in Europe. My father sat at the table and carefully placed the frayed cloth on his head. He gave its sides an awkward tug. The shiny cloth bowl seemed to fill with air and rise above his bald spot.

My father was about to make Friday night kiddush for the first time in our lives together. I didn’t trust this moment. I knew that on the other side of the levity crouched pain. “I found some old Manischewitz in the closet. This should be good, no?” My father was trying so hard. It hurt me to watch. He recited “…borei pri hagafen” and drank. I wanted to tell him that there was an introductory prayer, but chose to keep my mouth shut. I didn’t want to rustle the tension between us.

I wasn’t sure I wanted her terrified presence at the table. I was having enough trouble with my father’s unusual amiability.

My mother stood in the hallway watching us. She crossed her self-imposed barrier only to drop two plates of chicken on the table, then she quickly resumed her huddled position in the dark hallway. Her husband had chosen to tread upon this dangerous territory and seemed to be having too good a time to stop. He bit into his chicken leg and in mid-swallow said, “Mala, come sit with us!” I wasn’t sure I wanted her terrified presence at the table. I was having enough trouble with my father’s unusual amiability.

“No, no, I’m all right,” she said. “You want some gefilte fish maybe?” She retreated to the kitchen, and it was my father and me again. “l’d like to go to the synagogue tomorrow. Are there any around here?” I said to my father in the most matter-of-fact voice that I could manage. “You want synagogue, too? Shabbos is a day of rest. Rest with your parents. You’re only staying five days.”

“Okay, four! More reason you should stay with the old folks”.

“Let her go to synagogue!” came a voice from the hallway. My father crossed his arms and held them tightly against his chest. He was containing something more than his arms could hold. “You came to Florida to spend in synagogue? To light candles, to aggravate your mother” — his hands swept the air above the table — “to make…to force on us, this?” The anger took control of his face.

“Please, Michael,” my mother left her refuge to pull him away from the smoke.

It was too late. He stood above me and choked on his next word. I couldn’t make out what he said, but the power of his rage shook the room. I had trespassed on forbidden ground. It was a cold, black, scary place, and I was stuck. His finger drilled the air in my direction.

“Get out then! You want to leave, so go!” My mother could not stop or slow down my father’s hurricane of emotion. I don’t think she wanted to. He was also speaking for her. She leaned against the front door and wept without tears. My father’s eyes were locked open, dry with fury. I sat behind my plate of cold chicken, 117 pounds of guilt breaking a hole in my chair.

This was no ordinary Shabbos meal. The pretty lace tablecloth, the smell of boiled chicken, the red wine and the yarmulke mirrored a very old vision for my parents, more acute than the one in the dining room. My parents’ memories of Friday nights before the war are buried far away from the light of consciousness, fixed in another time. By creating this scene, had I set my parents up to make them confront these buried feelings?

I was finding fulfillment in a lifestyle that my parents felt betrayed by.

That night, I forgot how to sleep. The power of pure regret drove through the center of my stomach. I was helpless to free my parents of their pain. I took little comfort in the fact that what had happened that night was, indeed, not the source of their tragedy. I had banged hard on the steel door to a room that only the two of them occupied. A misty room with four trembling eyes, anguished and vulnerable. Why did they yield this time? Maybe they were caught off guard or just succumbed to my pressure, as if to say, “If you really want to see this, then look, but don’t stay long.” Pushing my cheek into my pillow, urging sleep, I heard the sound of my parents’ muffled voices rise and fall down the hallway. We were all trying to resolve something. As a palm leaf shadow on my wall finished its concerto, the realization crept in that I was finding fulfillment in a lifestyle that my parents felt betrayed by.

The next morning, we said little. Mostly, we shared bagels and silence. The silence stood near us, protecting us, drawing us closer. When one understands so completely, there are no words.

The days that followed held dreamlike calm. Our movements and words were careful and deliberate. We were very much in present tense, which was a treat for me and a relief for them. On the day of my departure, we kissed goodbye at the airport and held each other. For the first time, I felt like a grown-up in their arms.

Over a year of Sabbaths have gone by, and my parents continue to walk the streets of their sunny neighborhood. A change had taken place that night. We learned to respect one another. They showed me a part of themselves that the rest of the world would never see. I now understand the need for the soft Floridian blanket with which my parents drape their lives. My father asks me how my holidays are. My mother sends me kosher treats. She writes: “Betty, we miss you.”

My life as an observant Jew has made me aware of the depth and beauty within the moral example that my parents taught their daughter. My mother and father saw beyond their remembered sorrow that night. They saw me.

Bayla Sheva Brenner is senior writer in the OU Communications and Marketing Department.

Growth Through Kaddish
The 21st President of the United States: Failure or Inspiration?
Hiding Their Jewishness
The Jewish Pope: Following the Questions Home
Comments