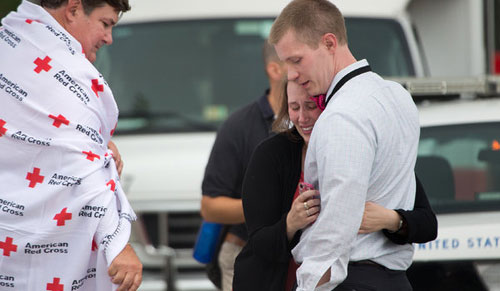 We can’t take life for granted.

“I’m looking for my husband!”

The anguished cry flew out of my radio, filling my kitchen. The woman’s emotion was so raw; I felt tears come to my eyes.

“I want to tell him I love him,” the woman on the radio said, and burst into tears.

The interviewer on NPR was reporting live from the Navy Ship Yard in Washington DC, in the midst of the police search for Aaron Alexis, the former naval reservist who shot and killed 12 people in the office complex on Monday, September 16. He was interviewing a woman whose husband was a civilian employee there, and she’d rushed to the scene as soon as she’d heard about the shooting.

Listening to her anguished words, I cast a glance out my window, where I could see my husband building our sukkah. I thought of my own tears not so long ago, pleading for any reassurance about his well-being. A year ago, my husband was sick with a life-threatening illness, and I too pleaded. All I wanted was reassurance that he’d still be there for me, that he’d go on living.

For a few intense months, everything I wanted was so simple. It all boiled down to one hope: that my husband stay alive. Everything else that had ever bothered us, that had ever seemed important – social obligations or home maintenance or all the millions of things that normally filled our days – receded to absolute nothingness. “Please let him be okay,” I’d think all day long. And, like the woman today on the radio, all I wanted was to be able to tell my husband I loved him.

A while later the reporter announced that the woman’s husband had been found unharmed, and I gave a sigh of relief. The carnage was far from over, but I knew that for her, at least, the worst of the nightmare was past. For a long time, perhaps forever, she’d look at the world with different eyes. That she’d remember her moments of terror, when all she wanted in the world was her husband’s life, and nothing else really mattered.

Esther Jungreis noted that the people trapped in the World Trade Center or on the hijacked airplanes on 9/11who were able to make final phone calls in their last moments all said the same thing: “I love you.” Confronted with death, they were aware of what was truly important in life. Nobody picked an argument. Nobody talked about money or the family business. Each caller simply said, “I love you.”

Like the bystanders in the Navy Yard, when confronted with tragedy, we find that we only have those three important words to say.

I watched my husband put the finishing touches on our sukkah, the make-shift hut where we’ll soon be spending our time and eating our meals during the holiday of Sukkot. Despite my husband’s best intentions, it’s a rickety structure, and I see the wind shake its fragile, fabric walls.

Leaving our solid homes to spend time outside reminds us how vulnerable we each are. We are on earth for a short time, and none of us knows when our visit will end. Today, 12 families in the Washington DC area are mourning their loved ones. In the aftermath, let’s mourn the victims and honor their memories.

And this Sukkot, let us look at life clearly, and remember the important things in life. And let’s be sure to turn to the people who mean everything to us and tell them, “I love you.”

Hollywood Insider Who's Defending Israel
The Promise Of The Land
Which Chat Are You On?: Parshas Behar/Lag Ba’Omer
Do You Like Slow-Cooked Food? Thank the Jews
Comments
MOST POPULAR IN Society
Our privacy policy