The Lemmings and the Jews 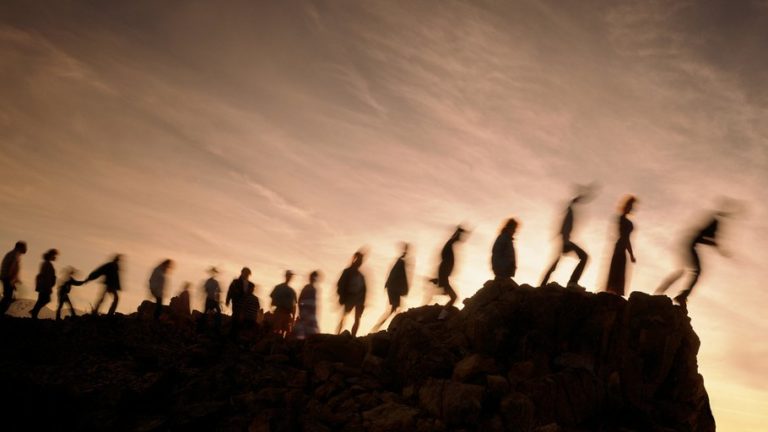 Why are so many Jews willing to side with our executioners and side with those who openly seek our destruction?

Yes, lemmings do exist – but it turns out that the story about their inexplicable habit of committing mass suicide by collectively jumping off a cliff is nothing but an urban myth. In spite of Walt Disney lending it credibility in his famous White Wilderness documentary and Apple making it unforgettable in its 1985 Super Bowl commercial “ Lemmings ”, nature isn’t that stupid. It was just a widely popular misconception based on a misunderstanding of lemming migrations.

Strangely enough though there is in fact a human parallel – an extremely odd human behavior identified by psychiatrists as “the lemming effect” with potentially dangerous and fatal consequences, and for many Jews today it has become a shared sickness.

It’s remarkable that “the lemming effect” has made such tremendous inroads into contemporary Jewish life. We are the people who have been the paragons of survival; we were the meaning of God’s first message to Moses symbolizing His people – a burning bush which was not consumed.

Why, then, are so many of us today willing to side with our executioners and join cause with those who openly seek our destruction?

It was nothing other than “the lemming effect” in London when a contingent of young Jews gathered together outside Parliament Square to recite Kaddish, the Jewish prayer of mourning for the righteous and holy departed, on behalf of the 62 Gazans (of which 50 were determined to be Hamas terrorists ) – whose names were read out individually with great respect– who were part of the tens of thousands of protesters attempting to breach the fence built to protect Israelis from the clearly stated goals of the “peaceful protesters.”

Yahya Sinwar , the leader of Hamas in Gaza, could not have been clearer about his goals : “We will take down the border and tear out their hearts from their bodies.” As thousands of Palestinians showed up to achieve that murderous goal, the media insisted that the march was “ against the occupation ” and “ for humanitarian relief ” in Gaza – even as rioters destroyed the very infrastructure that enables Israel to deliver food, medicine and supplies into Gaza.

“ This is not peaceful resistance. Has the option [of armed struggle] diminished? No,” Al-Zahar, former foreign minister in the Hamas government, said during an interview with Al-Jazeera. “On the contrary, it is growing and developing. That’s clear. So when we talk about ‘peaceful resistance,’ we are deceiving the public.”

And Jewish lemmings naïvely bought into the deception.

The London protesters felt a spiritual imperative to say Kaddish for those who made a sacred oath to murder them if only given the opportunity.

The London protesters felt a spiritual imperative to say Kaddish for those who made a sacred oath to murder them if only given the opportunity. In a classic perversion of the biblical principle that we are to preserve our lives by killing our potential murderers first, the progressive text seems to be we must pray for those who were not successful in carrying out their intent to slay us.

No, even lemmings aren’t that irrational – nor do they really take suicidal steps to hasten their own deaths.

“ The lemming effect” applies to all Jews who seem to have a soft spot of mercy and compassion reserved only for their avowed enemies, with none to spare for their own Jewish family. Another fascinating example took place this past month at a gathering of those whose lives were ostensibly dedicated to the preservation of Judaism.

On May 14 at the annual graduation ceremony of the Hebrew Union College in Los Angeles, Michael Chabon was honored with the invitation to deliver the commencement address to the future leaders of the reform movement. Chabon is a famous author publicly known for his hatred of Israel and contempt for Israeli Jews. Indeed, these were themes he harped on in his talk. But there was more.

Much of his remarks were an assault against Judaism. Particularly distasteful to him was the very idea of Jew marrying Jew – what he called “a ghetto of two.” Intermarriage, he said, is “the source of all human greatness.” Judaism draws lines, distinctions and boundaries, all of which are nothing less than evil.

To sum up, in his words, it would be no tragedy at all if Judaism would disappear forever.

And with the exception of one graduate who together with her family – some of whom reside in Israel – walked out in protest, the entire audience followed the honored guest speaker’s prescription for mutual suicide with thunderous applause!

It is painful to witness these fearful illustrations of mass stupidity. But it is more than stupidity. Perhaps psychiatrists can identify the causes of this self-hatred. In the interim, all of us need to recognize that even lemmings aren’t really that crazy – and it is more than time for Jews to renounce the suicidal behavior which defies our mission to be a “light unto the nations”.

One Rabbi's Dream to Close All Shuls

The Heroine in Everywoman
Don’t Believe in Other Gods Versus God is One
Seeing Without Eyes
Why Shouldn’t We Eat Whatever We Want?
Comments
MOST POPULAR IN Israel
Our privacy policy
Aish.com Is Looking for Great Writers