The Journey of the Convert 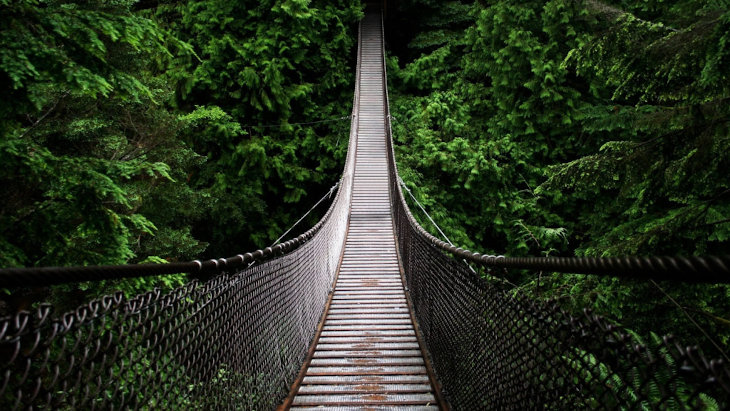 I didn’t mean to spend so many years walking down the path of the convert. But where they go, I will go.

Sitting across my desk, the husband looked at me as his wife gazed down. “Rabbi, he said, “we want to thank you for everything you’ve done for us. But we’ve decided not to continue with the conversion.”

I wasn’t shocked at their decision but it did feel like a loss. Three years earlier, we’d met on a Shabbos morning. We pushed our respective strollers to my house from shul and shared a Shabbos meal. Over time we learned together on many nights, shared our homes and sat in my sukkah.

But the rigors of Jewish observance jolted their marriage. Once, while I was driving with the husband in his pickup truck over the Columbia River, he said, “To be honest, I’m not sure I can give up Burger King.”

Now that the couple was ending their Jewish path, I told them that the clarity they achieved for their life was a success.

I don’t seek converts. Yet, during my 15 years serving as a rabbi in Portland Oregon, the journey of the convert has been my journey. When I work with potential converts, I tell them that the path looks different for different people. And it’s not right for everyone.

When I first moved to Portland, there was a young woman who came to our community from Central Oregon. She had a Jewish boyfriend. They started coming to our shul for a while and we got to talking about Judaism. At one point she said to me, “I’m not sure I’m comfortable with traditional Judaism and how it views women.”

I told her that this was an important issue for her to resolve. I encouraged her to go out and seek her path. I wasn’t sure where she would go. From time to time, she would call or email me. We had long discussions about gender, Jewish philosophy Judaism and passages in the Torah.

The Hebrew term for convert is ger, literally someone who sojourns. The term “ger” implies that someone is coming from the outside and may not feel permanent with the Jewish people. Every time I meet a potential convert, I am intrigued by their path. Something inside me wants to understand them more deeply, since we are each on our own journey in emunah (faith).

The journey of the convert started long ago. It’s written in the Book of Ruth. Two women – Ruth and Orpah – had divergent moments of self-discovery at the same time.

Their mother-in-law, Naomi, was once a prominent woman. But by the time we meet her in the Book of Ruth, Naomi is a destitute, bereaved woman, preparing to walk back to Israel from the fields of Moav. Initially, the three women set out together.

Naomi told Ruth and Orpah, “No my daughters, go back to your home, and may God do kindness with you.” Naomi explained that Ruth and Orpah – foreigners – would have no marriage prospects in Israel. These women had lived and buried their dead together. Now it was time to part.

Naomi protested Ruth’s embrace. “Orpah has gone back to her gods, continue with her and go back home!”

And Ruth said, “Do not urge me to leave you…Where you go I will go, where you sleep I will sleep, your nation is my nation, your God is my God.”

With these words, Ruth sums up the journey of the convert. As she embraced Naomi, Ruth clung to the people of Israel. Together they walked to Beit Lechem where Ruth found the fields of Boaz. There she scraped out a living, gleaning sheaves.

Boaz told Ruth that her path was the path of chesed, doing “kindness,” as it were, with God. Ruth had found “refuge under the wings of God’s Presence.”

How can the convert know they are ready to embrace the Jewish people and enter the covenant with God? How can they change their identity and become the son or daughter of Abraham and Sarah? It doesn’t happen quickly, but somehow, they connect with the Jewish people. Then, in a moment of self-discovery, they find themselves.

“Your people are my people, your God is my God.”

I saw it happen with the young woman from Central Oregon. One Shabbat morning, she showed up early to shul. It was the first time I had seen her in months. Something felt different. “Rabbi, I am going to become Jewish.”

She wasn’t looking for my agreement. It just was. Come what may, she was going to be Jewish. And she was right. She entered the covenant of Abraham, and, together with her soon-to-be-husband embarked on building a faithful home in Israel. Today, when I hear about her acts of kindness and her Jewish kids, I think back to her early steps on her journey, all those years ago.

I didn’t mean to spend so many years walking down the path of the convert. Yet, I’m grateful to be on this road. Where they go, I will go. Their journey is my journey.

Rabbi Ken Brodkin is the Rabbi of Congregation Kesser Israel in Portland Oregon, where he lives with his wife and children. For weekly guidance and inspiration, tune in to his Torah Journey Podcast, wherever you listen to Podcasts.

The Body, the Bridge, and the Black Hat
The Jewish History of Prague
Why the Sexual Revolution was Bad for Women
The Princess: Sukkot
Comments
MOST POPULAR IN Spirituality
Our privacy policy
Aish.com Is Looking for Great Writers