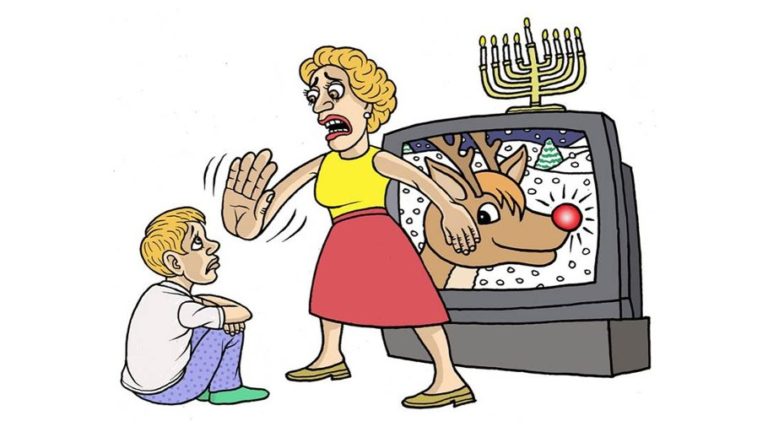 The two best-selling Christian holiday songs were written by the son of a cantor named Israel Baline, better known as Irving Berlin.

What’s a Jew to do on December 25th? We all know the Chinese food drill, but as usual, we are a people of fascinating facts and high humor, so I give you “a little bit of this; a little bit of that” to share on Christmas Day.

FREDDIE ROMAN ON CHRISTMAS AND HANUKKAH

The legendary comic of “Catskills on Broadway” fame, who is synonymous with The Friars Club and Florida pokes some fun about the holidays.

Those of you out here tonight of the Christian faith, you are so lucky. Every year, December 25th is Christmas. Every year, exactly the same. You could make plans!

The Jewish people are not that lucky. We have no idea where our holidays are. If we don't have the Manischewitz Seven Year Calendar, we have no clue.

For example, our holiest day, is Yom Kippur – or as the Reformed Jew likes to say, Yom Kip-pour (all our Reformed Rabbis like to think they're Shakespeare).

Well, a few years ago, Yom Kippur came out on October 27, which made Yom Kippur that year very late.

And there isn't a Jew in this room tonight that didn't say last year, 'You know, Hanukkah's early.' You see Jewish Holidays are either later or early. We are never on time."

“I’m dreaming of a – ” Sing Mamala! The two best-selling Christian holiday songs were written by the son of a cantor named Israel Baline, better known as Irving Berlin, born in 1888 near the Siberian border. An 1893 pogrom brought the family, with eight children, to New York. During his lifetime, he won a plethora of honors for his charitable contributions and his 1,500-plus standards, but perhaps his most enduring legacies are the two most popular Christian holiday songs, “White Christmas” and “Easter Parade.” Not bad for a poor Jewish immigrant who never learned to read or write music and composed in only one key – F sharp.

Have an Eggroll, Mr. Goldstone! Why is chow mein the chosen food of the chosen people on Christmas and throughout the year? The answer is a matter of academic speculation. Contributing factors include the fact that Chinese restaurants were always open during Christian holy days such as Sundays and Christmas. Secondly, Chinese food uses almost no dairy, so for Jews who don’t mix meat and milk, Chinese food was more palatable in contrast to the two other most popular ethnic cuisines in America, Mexican and Italian, which both use dairy.

Clean the Chimney and Leave a Plate of Blintzes. While Christian children write Santa, since 1985, Jewish children could make a list, check it twice and send it to Bubbie and Zadie. In 1981, writer Daniel Bloom created a letter-writing campaign to Bubbie and Zadie and received over 10,000 letters. In 1985, he wrote, "Bubbie and Zadie Come to My House,” about grandparents who fly from house to house on the first night of Hanukkah, singing songs and telling stories. In 2006, the book was re-published. Bloom has said the letters and answers aren’t about gifts, but express excitement about the holiday and hope for a flyby from Bubbie and Zadie.

My Son, the Genius! This phrase was probably on the lips of Hyman and Rebecca when in 1884, their seven-year-old, Joshua Lionel Cowen (born Cohen) attached a small steam engine to a wooden locomotive - and blew up the wallpaper. As a teen, he invented an electric doorbell, but his teacher called it impractical. Worse, he lost a fortune selling the rights to his electric flowerpot. True, it wasn't a hit, until the buyer detached the tubes and marketed ... the Eveready Flashlight. Wiser, Joshua, with a friend, launched the Lionel Manufacturing Co. in 1900. After attempting to sell portable electric fans, he attached the fan's motor to a miniature wooden railroad car. This time it didn't explode. It moved. And the quintessential Christmas gift – Lionel trains – was born.

Festivus for the Rest of Us? Who can forget the Seinfeld episode when George, to get out of Christmas-gifting, tells his boss he celebrates “Festivus.”

GEORGE: "I was afraid that I would be persecuted for my beliefs. They drove my family out of Bayside (New York), Sir!?"

Well, a drug dealer in an Orange County California prison was of the same “persuasion.” Malcolm Alarmo King reportedly cited his observance of Festivus to get the healthier kosher meals and needed a religious reason. A local Bayside paper claimed he got his wish, though the holiday was a figment of the Costanza mishegoss. All of this begs the question: Were the Costanzas even Jewish? The house smelled like kasha, but papa Frank had a cousin in Italy. (Maybe he was Sephardic?) Then George joined the Latvian Orthodox Church. Is George a Re-Converter and if so ... never mind.

Exultation! The Irish and Italian boys had Christmas once a year; we had exultation every Friday. In the neighborhood, rent by the shouts of peddlers and the myriad noises of the city, there was every Friday evening a wondrous stillness. From the synagogue you could hear the murmured prayers of the congregation. You came home to find your mother dressed in her wedding dress with a white silk scarf around her head. And your father told you all the sufferings throughout the centuries were dedicated for this moment, the celebration of the Sabbath. – Hutchins Hapgood (Excerpt) “The Spirit of the Ghetto” (1902).

Taxes Shmaxes
The Blue Beyond
Great Place to Live
Is Eating Supposed To Be Spiritual?
Comments
MOST POPULAR IN Jewlarious
Our privacy policy