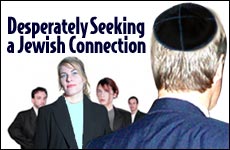 I never understood exactly how a person could love all of his fellow Jews until I started wearing my kippah all the time.

One of the commandments of the Torah is that it is incumbent upon every Jew to love his fellow Jew. Not just one or two -- all of them. Even after a decade of being involved in Torah Judaism and leading a religious life today, I still have a problem with that one. I have to be honest: I don't like every Jew I've ever met. And I certainly don't love every one of them either. I've met some that I like (my friends, my Rabbi, etc.) and ones that I love (I'm married to one of those.) But not the whole lot.

Total strangers -- fellow Jews all -- would see my kippah and reach out to me, desperately trying to reconnect with their Jewish roots.

I never understood exactly how a person could love all of his fellow Jews until I started wearing my kippah all the time. It was then that total strangers -- fellow Jews all -- would see my kippah and reach out to me, desperately trying to reconnect with their Jewish roots. Roots from which they had become terribly disconnected.

While I had certain ideas in my mind about what to expect when I put on a kippah full time, having Jews come out of the woodwork to connect with me (of all people!) never even made the Top 100 list.

This phenomenon first manifested itself in, of all places, a Rite Aid drug store. It was a Friday afternoon and I was waiting to make a return in one of those classic, long "drug store lines" that somehow never seems to move. I was watching the clock, as it was getting close to candle lighting time for Shabbat, when I noticed an elderly lady watching me, and smiling. I sensed that she wanted something, but it was late, I had a headache, and like everyone else in Los Angeles, I didn't want to get involved. I just wanted to be left alone, in peace, to make my return.

But it was not to be. The next thing I knew, she was at my side. "It's like waiting to go up on the bima isn't it?" she asked.

Her accent told me she was from Long Island or Queens or something of the New York variety. I did one of those cartoon character double takes. "Bima?!" I said incredulously in my mind. "Bima?" Using the "code word" of "bima," the Hebrew word for the table in the middle of the synagogue upon which the Torah is placed when the congregation reads from it, was her way of letting me know that she was Jewish.

Now, understand, in L.A. no one talks to one another in line. And certainly no one reveals their religion to perfect strangers (unless they can't help it as in the case of guys like me who wear kippahs). So, I found it fascinating that for some reason this elderly woman felt it was important for me to know that she was Jewish.

I didn't want to leave her hanging after her putting out there that she's a fellow tribesman, so I acknowledged our kinship using her "code." "Yes," I said, smiling, "like waiting to go up to the bima."

She nodded, noticeably happy that she succeeded in making the Jewish connection with me. She then told me how she was raised religious, but had drifted away from it after moving to California and how seeing my kippah reminded her, suddenly, of her childhood and the warm memories she had in the community she lived in wherein all the men wore kippahs.

Here was this woman pouring her heart out to me in the middle of Rite Aid because she felt she needed a connection at that moment with another Jew.

My heart softened towards her. Suddenly, I was not so concerned about the clock, my return or my headache. Here was this woman pouring her heart out to me in the middle of Rite Aid because she felt she needed a connection at that moment with another Jew.

"That's nice," I said. "Those are some very nice memories."

It was finally my turn at the register. I made my return and headed for the door. Before I got there, I stopped and turned around to see that woman still smiling at me. I smiled back at her. I decided to reach out back to her, again, using a code we both understood. I felt that it would mean something to her. "Have a good Shabbos," I said.

Her eyes lit up. "Thank you. Thank you very much. And a good Shabbos to you, too!"

These experiences happen to me everywhere -- not just Los Angeles where there are lots of Jews. Sometimes God puts me in a place where there are very few Jews. This happened most recently when I was in Lancaster, of all places, on business. For those of you unfamiliar with Lancaster, California, it is a place that is sort of on the outer edge of civilization as we know it. It is so far from anything that you wonder how anyone lives out there.

As I approached the freeway in my car to get myself back to the safety and security of "civilized" Los Angeles, I noticed a Costco. I needed bottled water (they sell it really cheap) and I figured that the lines would be short there since, well, there just aren't that many people out that way!

I entered the Costco and stopped to peruse the books on display for sale. All of the sudden, I got that feeling. The feeling I'm being stared at again. "Well," I thought to myself, "kippah-wearing guys are pretty rare out here (as are kippahs in general for that matter), so it's no wonder someone is staring at me". I looked up and saw a man staring at me. He had a smile on his face as he slowly walked towards me.

"Are you the rabbi?" he asked, sort of stammering to get the words out.

"But you're wearing one of those…" he stammered, making circular motions on top of his head.

"A kippah," I finished for him.

"Yes! A kippah," he said excitedly, as if we were both secret agents and I just gave the correct "countersign." Once again, there were two Jews connecting using their "code."

"But if you're wearing a kippah and you're not the rabbi, then who are you?"

"Who am I?" I said to myself. Okay, a fair question. Certainly one I've asked myself. Kind of existential, though, for a Tuesday afternoon.

Apparently, that was enough -- enough for this man to take the connection to the next level.

He told me how he was raised Orthodox -- even went to yeshiva until the 6th grade -- but then his father moved the family to Lancaster for a business opportunity. "Now," he told me with sadness in his voice, "I'm just like everyone else here -- not very Jewish. I sometimes miss it, you know, all of the things we used to do when I was a kid, but out here…well, you understand."

He smiled at me. I smiled back. I did understand. I wasn't religious all of my life. My Jewishly connected family moved from New York and Baltimore out to the "boondocks" of the West Coast and lost their connection to their religion as well.

I didn't know what to say so I didn't say anything. I just smiled at him and nodded understandingly.

"Well, it was nice talking to you," he said, and he turned to go.

I stayed at the book display thinking about our conversation for a few minutes and then realized that I should have done something. Here was a Jew who had lost his connection to Judaism and was reaching out to me, trying desperately to reconnect. And I just let him leave. I should have invited him and his family for Shabbos or something. I decided that I would -- that I had to.

But when I went to look for him, he was no where to be found in Costco. I purchased my bottled water and headed back to Los Angeles.

At that moment they realize the need to reach out to a fellow Jew and say, "Hey -- I'm still a Jew! I am!"

At first I used to wonder why Jewish people were so drawn so often to my kippah. Lately, it's been making sense: they are trying to connect with something Jewish. Plain and simple. The people that approach me are all people who, for one reason or another, have become disconnected with Judaism. When they see someone wearing a kippah, someone who has the connection they lost, they suddenly realize that their soul misses that connection to God. The kippah reignites their Jewish soul and suddenly they realize how lonely that soul has been. So they reach out. They reach out to the only thing that is "authentically Jewish" and close by -- me -- and they try to reconnect. It is as if at that moment they realize the need to reach out to a fellow Jew and say, "Hey -- I'm still a Jew! I am!"

Perhaps it is also a message to themselves. They have felt lost for so long and suddenly the beacon of a kippah helps them find their way back, even if only for a few minutes, in a Rite Aid or Costco.

I leave those experiences being amazed at how much I can care for a perfect stranger that I just met. I leave those experiences also being reminded, once again and in a profound way, how important it is for all of us -- whether religious or not -- to reach out to our fellow Jews and help them all find their way back home. Hey -- maybe I do love all of my fellow Jews after all. 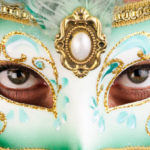 My Name was My Mask4 min read 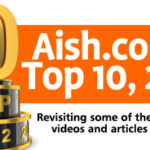 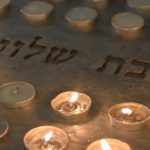 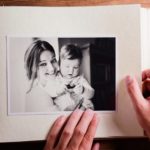 Saying Goodbye to Mom when I was Only 1313 min read 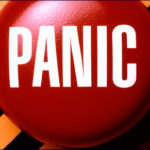 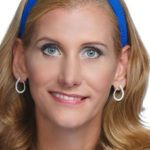