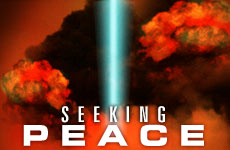 Of the 6000 languages spoken in the world today, only one is truly universal: the language of tears. And that is the language we speak today.

For a year we've shared tears with the people of Israel, who've suffered the almost unimaginable number of more than 7000 terrorist attacks. That is one an hour, every hour of every day for almost a year. In their wake, they've left thousands injured and more than 170 dead.

And now we share tears with the people of America, who have suffered the worst single peacetime act of terror they and we have ever known. And we say to them, your grief is ours. We feel it in our very bones.

Ribbono shel olam [Lord of the Universe]: you know we never sought this.

Almost three thousand years ago your prophets were the first people in all of history to speak of peace as an ideal.

There wasn't one prayer we prayed for a hundred generations that didn't end with a prayer for peace.

Not one word of anger or hate... just a deep humanity and a desire for peace.

And today, we heard the father of a murdered son, and the brothers and sisters of Israeli soldiers missing in action – people whose lives have been shattered by grief – and in all they said, there was not one word of anger or hate or desire for revenge; instead, just a deep humanity and a desire for peace. Ribbono shel olam, this is your people, and I am humbly proud to belong to it.

And when your children, ravaged by the Holocaust, came together to rebuild their life as a nation in Your holy land, all they ever sought was to live at peace with their neighbors.

On the very day the state of Israel was born, attacked on every one of its borders, David Ben Gurion said – it's there for all time in the declaration of independence – “we extend our hand to all neighboring states and their peoples in an offer of peace and good neighborliness.” And the offer was rejected, as it has been rejected so many times since.

Eight years ago the late Yitzhak Rabin shook hands with Yassir Arafat before the cameras of the world, and Israel and the Palestinians bound themselves to engage in negotiations, renouncing all violence and terror. Yitzhak Rabin gave his life for that ideal.

Another Prime Minister, Ehud Barak, offered more for the sake of peace than anyone dreamt, anyone expected, anyone thought possible. And at that very moment, when they were being offered more than they could realistically have hoped, the Palestinians broke the Oslo accords, and began a campaign of terror, designed to undermine the very existence of a Jewish home. It brought bloodshed to the streets, the marketplaces, the restaurants, of Israel. But it did more than that. It became a campaign of vilification directed to the press and television screens of the world that I never dreamed I would see in my lifetime.

It culminated in a United Nations conference in Durban, a conference convened to fight racism, which became instead a platform for a new and virulent racism, resurrecting every evil image and myth of a thousand years of anti-Semitism. There, under the unprotesting eyes of the nations of the world, the Jews of Israel were accused of racism, apartheid, ethnic cleansing, genocide and crimes against humanity. There was holocaust denial, not from crazed individuals but from official government spokesmen. Thousands of leaflets were distributed with passages adapted from the Protocols of the Elders of Zion and cartoons from Der Sturmer. And this at an international conference against racism?

And within a week of the hijacking of the United Nations came the hijacking of four planes in the United States – as if to remind us what no one should ever have forgotten: that hatred knows no boundaries. It spreads like fire, and if it is not extinguished at the outset it blazes beyond control.

And yet even then, unbelievably, we heard voice after voice blaming Israel, as if all the evils of the world have one source: us, we who have striven for peace, for blessing and for life. Friends, let me say it clearly and unequivocally. There is only one connection between the attacks on Israel and the United States. It has nothing to do with Israel's relations with the Palestinians. It has nothing to do with American foreign policy. It is that Israel and the United States are free, open, liberal, democratic societies, and therefore constitute the ultimate threat to those who seek to create closed, repressive, autocratic and totalitarian societies – with no rule of law, no free press, no independent judiciary, no permitted dissent, and no minority rights.

Imagine this, that those journalists who have blamed Israel in the past weeks were forced to leave Britain. Where would they choose to live? In Afghanistan, under the Taliban? In Gaza under the Palestinian authority? In Iraq under Saddam Hussein? In Iran or Libya or Syria or any other of a dozen countries we could name? Or in Tel Aviv in the Israel they condemn, where you can live as a Christian, pray as a Muslim, even criticize the government, without being imprisoned, mutilated or quietly assassinated.

Who ever offered the Palestinians a future? Only Israel.

A few days ago, we sat in shul on Rosh Hashanah. What did we read about when we read from the Torah and the prophets on that holy of holies of Jewish time? We didn't read about war or power or conquest. We read about Sarah and the gift of a child. We read about Hannah and her prayer for a child. We read about Rachel, weeping for her missing children. I cannot tell you how moving I find it that this is the greatest Jewish dream – just that: to bring children into the world, and give them a place of safety, a home; and teach them the songs and stories of our people; and see them grow and write their own chapter in our story; and make our ancient faith young again. And in the end that simple love of life and of children gave us the strength to outlive every empire built on war and power and violence; and when nations learn to love their children more than they hate their neighbors, we will have peace.

Let us pray for peace, work for peace, and if necessary, fight for peace, until the children of the world can grow up without hate and fear.

And as we stand today, with the people of Israel, with the people of the United States and Britain, and with, I believe, the majority of Muslims around the world, I want every one of us to leave this place with our heads held high. Let us say to the world: we will not answer hate with hate; nor will we respond to terror with fear. Let us say to our enemies: We do not seek our freedom at the cost of yours; therefore do not seek yours at the cost of ours. From this day forth, and for as long as it takes, let us pray for peace, work for peace, and yes, if necessary, fight for peace, until the children of the world, regardless of their race or faith, can grow up without hate and without fear: loving the life that is theirs, respecting the life that is their neighbors'. “See,” said Moses, “I have set before you life and death, the blessing and the curse. Therefore choose life.” That is now the choice that faces the world. Ribbono shel olam, give every one of us the strength to defeat the forces of death and, at last, build a world that honors life.