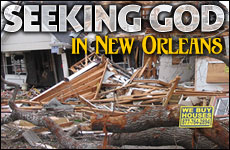 New Orleans residents who come upon Jews celebrating the holiday of Purim might imagine that we'd taken a page from their book, so to speak. Purim could look superficially like the Mardi Gras, involving heavier than normal levels of drinking, dressing up in outlandish costumes, and dancing and revelry.

However, Purim involves one critical component missing from, shall we say, more Bacchanalian celebrations. Purim's core message -- revealing the hand of God in even the most mundane or difficult situations -- resonates loudly with our family as we seek to re-establish our life here in post-Katrina New Orleans.

My wife, two children, and I returned to New Orleans four months after fleeing 10 feet of water which entered our Lakeview neighborhood. Our house and all of our property -- clothes, toys, books, pots -- were destroyed after sitting for three weeks in flood waters which reached as high as the ceiling.

Our Jewish books and mezuzahs were removed for reburial in a local cemetery.

As we were only renting our house, and had no insurance on its contents (we had only been in town for a few weeks when Katrina struck, and hadn't completed any paperwork), there was nothing to be done about the molding piles of stuff. Soon after, our old landlords began gutting the place; all of the Jewish materials, such as holy books and mezuzahs were removed for reburial in a local Jewish cemetery by students and volunteers. FEMA provided a miniscule amount of assistance, but the core help has come from Jewish institutions across America.

And now, we've moved into a new apartment and in doing so encountered a series of escapades that has challenged us to seek the Almighty's guiding hand amidst the chaos.

We thought things had really hit rock bottom in mid-January when we heard from friends that our old house had been struck by a tornado. My wife and I looked at each other, as if to say, What next? Burning hail? A big Monty Python-esque foot coming down from the sky to smash the city?

When we drove over to check the report, we found the rumors barely exaggerated: The tornado actually destroyed a series of houses directly across the street from ours, adding a new layer of glass, metal, and cement debris to the already tall piles of trash.

Then, a house near our new synagogue near Tulane University caught on fire, and burned for a long time before teams of firefighters could extinguish the blaze. The long delay drove home the message that New Orleans is not yet at full capacity. Thank God, no one was harmed, and the fire didn't spread to nearby houses. The long-term consequence of this event was a curious, barbecue smell to my tallis.

Our challenge in seeing God's presence reached new heights when someone vandalized our car, the one large possession we managed to retain during our evacuation. The vandals smashed bottles against the hood, tore off pieces like the antenna, and tried to break the windshield.

Laurel and Hardy couldn't have concocted such a script.

Laurel and Hardy couldn't have concocted such a script.

The dramatic story of the near-extinction of the Jews in Persia, told in the Megillat Esther at Purim, never once directly mentions God. This is in dramatic contrast to other seminal Jewish events, such as the Exodus from Egypt, where the Almighty's hand is clearly visible to Jews and non-Jews alike. Similarly the miracles which took place at the giving of the Torah at Mount Sinai, and then during the 40 years in the desert, were all open manifestations of God's interaction with us at all times.

The story of Purim, however, only hints at divine oversight and direction. How is it that there just happens to be a Jewish queen who can turn the heart of the easily manipulated King Achashverosh? How is it that the very mechanism that Haman meant to use to kill Mordechai and his supporters, was then used to put Haman and his family to death? How did the Jews turn from victims into leaders?

Purim is perhaps closer to what most of us experience in the 21st century: few open miracles, but a myriad of amazing coincidences and happenings that point to God's illuminating presence. Like Esther and Mordechai, our challenge as Jews is to connect to God, amidst events which may test our belief that God is constantly doing good for us.

One example of this: my wife and I learned to thank God even for helping us with "small" things, such as working household utilities. When you're ready for a shower, do you step into the bathroom assuming there will be running water -- both hot and cold? Due to a broken water line near our house, we had to wash our dishes in the bathroom of my university office for most of a week. (I received the strangest looks for carrying buckets of plates, cups, and silverware into the men's' room.) We showered where we could -- whether at the gym at Tulane University or the Jewish Community Center nearby -- and drank bottled water (a good idea anyway at this point).

Our house now has running water, and when I first turned the tap on, I thanked God for this gift. As Rabbi Avigdor Miller often said, water is the stuff of life: without it, our bodies cannot function, our eyes become desiccated, and our minds shut down.

So why did we return, with only a carload of possessions, to a city submerged and beset by problems? A number of factors impacted our decision. For starters, our son's Jewish day school quickly reopened, and my job at Tulane University was intact.

But I think most of all was the sense that we could make a positive impact on New Orleans. One primary way to peel back the masks which hide God's presence is to do things which bring more light into the world. Rabbi Eliyahu Dessler explains that we always have the choice to be a taker or a giver. After the hurricane, we entered taking mode, appreciating the generosity of Jews around the nation who helped us start up again. Authors and retailers have generously sent me replacement copies of books, Torah tapes, furniture, toys, and clothes that were destroyed in the flood. A scribe generously reduced the price of the 14 (!) mezuzahs that we needed to put up in our new, door-ridden home.

This outpouring of help motivated us to give back to our community, to reveal more of the Almighty's illumination even in the darkness of rebuilding. And we thought this would help our children learn more about the values that define us as Jews.

We have undertaken to organize Torah classes, and my wife is helping restart logistical operations for Congregation Beth Israel, whose physical structure was completely ruined by water.

Rather than challenging God's existence because of our problems, we seek to affirm the connection.

We are also providing copies of a recent book, Spiritual Survival for Law Enforcement, to the embattled New Orleans Police Department. The book emphasizes that more than the "mundane" task of enforcing the law and directing traffic, police officers can envision the job as a way to generate true peace between individuals in society.

As always, we seek to turn life's difficulties into lessons for ourselves as Jews. Rather than challenging God's existence because of our problems -- which, of course, are nothing to compared to those who lost loved ones or who suffered physically in the floods, or who are still without homes and jobs -- we seek to affirm our connection to the Almighty, even if His presence is masked under the often unpleasant realities of existence.

So whether we've been getting our car repaired, or washing dishes in a public bathroom, or waiting indefinitely for FEMA responses, New Orleans has provided ample opportunity to connect with the Almighty and with deeper parts of ourselves.

New Orleans will recover, but it will be diminished for at least the next four to five years. Hopefully our small actions and the hard work of our community will help build a stronger, better place, where God's presence will always be more fully revealed.

Rabbi Dr. Daniel P. Aldrich received his semicha from Rav Dan Channen, shlita and he is a alumnus of the Darche Noam Yeshiva of Jerusalem. After his house was destroyed in Hurricane Katrina, he and his family spent a year living in East Asia. He currently lives with his family in West Lafayette, Indiana where he and his wife Yael work to spread the love of Torah among Purdue University students and the community.

I've Inherited My Father's Nightmares
Evolution 2.0: The Coming Darwinian Revolution
Chukat 5782: Let’s Play the Blame Game!
The Sin of Moses: The Two Ways to Communicate
Comments
MOST POPULAR IN Israel
Our privacy policy