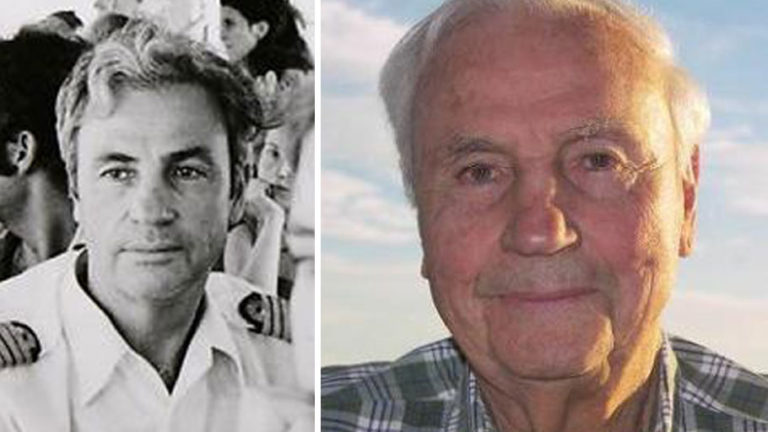 French airline pilot Michel Bacos, who recently died at the age of 94, knew what terror and Jew-hatred looked like.

A former free French fighter during World War II, Captain Bacos later recalled: “I fought the Nazis. I knew precisely what fascism was all about. The genocide (of Jews during the Holocaust) is a horror that none of us had forgotten.”

That memory sustained Capt. Bacos years later, in 1976, when the plane he was piloting was hijacked by Palestinian terrorists. With his life in danger, Capt. Bacos chose to stand with his Jewish passengers. 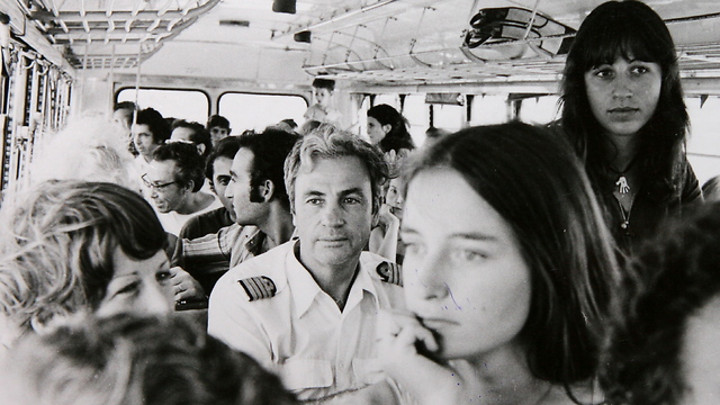 Air France pilot Michel Bacos, in uniform, returning from Entebbe with the other hostages

The first leg of Air France Flight 139, headed from Tel Aviv to Paris on June 27, 1976, was uneventful. It took off as scheduled, carrying over 240 passengers and 12 crew members. After a routine stop for refueling in Athens, the flight departed once more, headed to Paris. A few minutes after takeoff, terrorists from the Popular Front for the Liberation of Palestine and the pro-Palestinian German terror group Baader Meinhof pulled out guns and announced they were hijacking the plane.

Hearing screaming from the cabin, Capt. Bacos initially thought there was a fire on board. The plane’s chief engineer opened the door to the pilot’s cabin and found himself nose to nose with a German terrorist holding a pistol and a grenade. “If you stay still and do nothing suspicious, no one will be hurt,” the German told the crew. The terrorist pushed the muzzle of his gun into Capt. Bacos’ neck and ordered him to turn the plane away from Paris and fly to Libya instead.

Capt. Bacos later explained he felt he had no choice. “We could only obey the orders of the terrorists…Every time I tried to look in a different direction, he pressed the barrel of his gun against my neck.” Capt. Bacos, a 52-year-old veteran of World War II, was a seasoned pilot and kept his calm. He flew to Benghazi, Libya, where the sympathetic tyrant Muammar Gaddafi allowed the plane to refuel. The terrorists then directed the crew to take off once more and fly to Uganda.

The plane landed in Entebbe, where Idi Amin, the genocidal dictator who ruled Uganda, met it on the tarmac with a warm welcome for the hijackers. More Palestinian terrorists boarded the plane as well as Ugandan troops. They went through the cabin, examining the papers and passports of passengers, separating the Jewish and non-Jewish passengers.

148 of the passengers were neither Jewish nor Israeli and they were freed on June 29, 1976. The 53 remaining passengers were brought to a sweltering abandoned terminal and held hostage. The hijackers and Ugandan troops told the non-Jews they were free to leave on the next flight to Paris. For the Jewish passengers, a terrifying fate awaited: the hijackers demanded the release of 54 convicted Palestinian terrorists being held in prisons in Israel and around the world, as well as $5 million. If these demands were not met, the terrorists would start to kill Jewish passengers.

Capt. Bacos and the rest of the crew were told they were free to leave, but the captain refused to abandon his Jewish passengers. “I told my crew that we must stay until the end, because that was our tradition, so we cannot accept being freed. All my crew agreed without exception,” he later recalled.

Capt. Bacos demanded to see the Jewish passengers and was allowed to visit the terrified hostages. After years of flying to Israel, he spoke some Hebrew and was able to comfort them, trying to convey a sense of reassurance he hardly felt himself. The situation appeared hopeless.

Unbeknownst to the hostages, Israeli commandos were contemplating a daring raid. After attempts to reason with Idi Amin proved fruitless, Israeli officials tried to gain the cooperation of France to help free the hostages. As the days dragged by and the terrorists set one deadline after another for their unreasonable demands, it became increasingly clear: Israel stood isolated and had to find a way to free Jewish hostages hundreds of miles away in a hostile nation, alone.

On July 3, 1976, with just hours to go before the terrorists had vowed to start shooting hostages, Israeli Prime Minister Yitzhak Rabin authorized an unprecedented, top-secret attack. Four transport aircraft carrying Israeli troops took off from Israel, landed in the Egyptian port of Sharm el-Sheikh, then took off again, headed towards Entebbe. 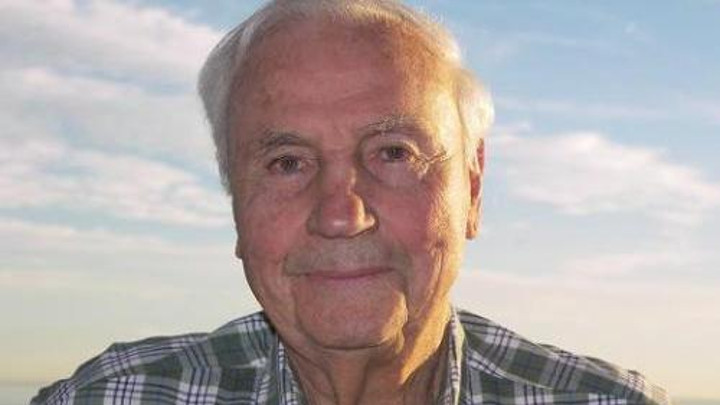 They were helped by a Jewish passenger from the doomed Air France flight named Ninette Morenu. She was mistakenly identified as non-Jewish by the terrorists due to her very French-sounding name, and she quickly contacted Israeli authorities after arriving back in Paris. Before departing Entebbe, Ms. Morenu had made a determined effort to memorize the layout of the airport, particularly the terminal where the Jewish passengers were being kept. The diagram she drew helped Israeli officials decide they had enough information to go ahead with their plan.

Under cover of night, the soldiers flew to Uganda. They knew that upon landing they would be marooned in a hostile country, far from any logistical or military allies. Once in Uganda, the Israeli commandos changed into uniforms of the Ugandan army. The plan was to pretend to be a motorcade carrying a triumphant Idi Amin to the airport where his miserable hostages were being kept.

The plan nearly was derailed. The motorcade came under fire from Ugandan troops operating a roadblock, but managed to drive through and arrive at the airport. For Capt. Bacos, the site of the motorcade was initially terrifying - until he got a look at the soldiers. “I lifted my head,” Capt. Bacos later recalled, “and I saw a soldier dressed like a member of the Ugandan army with a white hat, and he said in Hebrew: ‘Listen, guys, we’re coming to take you home.’”

Israeli soldiers battled with the terrorists and Ugandan troops. In the melee, three passengers were killed: Ida Borochovitch, Jean Jacques Maimoni, and Pasko Cohen. A fourth passenger, Dora Bloch, had been hospitalized in a Ugandan hospital and was murdered there after the raid. One Israeli soldier, Lt. Col. Yonatan Netanyahu, the older brother of Israeli Prime Minister Benjamin Netanyahu, was killed in the fighting. 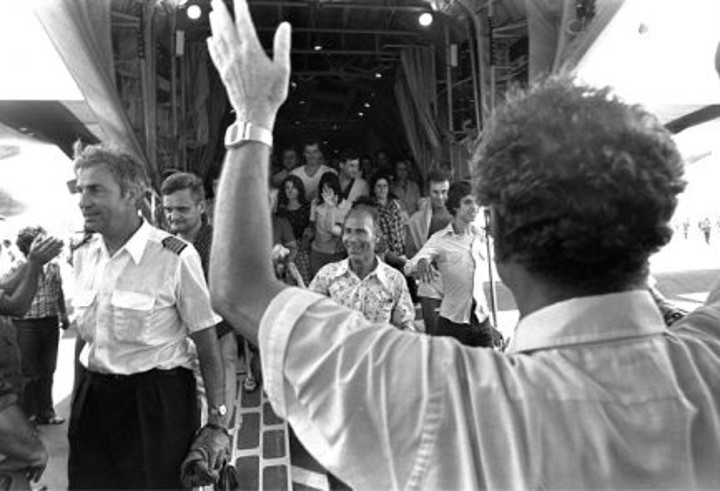 As the Israeli soldiers flew home, they had a special message for Capt. Bacos, whose commitment to his Jewish passengers had never wavered, and who was sitting with them in the main body of the plane. “Your place is not here,” a soldier told him, “but in the cockpit.”

After the daring raid on Entebbe, Capt. Bacos took off two weeks for a vacation. Then he resumed flying for Air France and had a request for his very first flight back on the job: he wanted to fly to Tel Aviv.

When Monsters Lurk in Every Shadow

Listen to the Silence
Evolution 2.0: The Coming Darwinian Revolution
Chukat 5782: Let’s Play the Blame Game!
The Sin of Moses: The Two Ways to Communicate
Comments
MOST POPULAR IN Current Issues
Our privacy policy