Hiroshima and the Pilot’s Tear 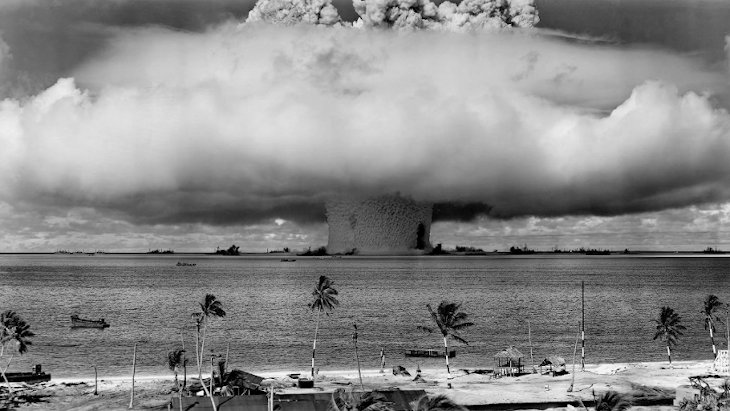 How a survivor of the atom bomb stopped hating the pilot who flew the plane.

As presidents boast of their nuclear arsenal, tossing threats and taunts to and fro, east and west over our heads, it behooves us to be reminded what they’re talking about. No nuclear warhead has ever been dropped on a human population, but the far smaller atomic bomb has of course already been used, and witnessed.

After that atomic bombing, which brought World War II to an end, Koko Tanimoto was a child in Hiroshima and I a child in Connecticut. The two of us wouldn’t meet until 40 years had gone by, but our fathers, no longer alive, had shared a dream.

It was the writer Pearl S. Buck who brought the two idealistic young men together in 1949, from opposite sides of a divided world. Reverend Kiyoshi Tanimoto, a survivor of the Bomb, was operating a sewing workshop for 25 young women maimed in the explosion. The writer and editor Norman Cousins, my father, was an American Jew struggling in the wake of the Holocaust to fathom humanity’s deadly hatred for Jews, and America’s abhorrent distinction as the first nation not only to use the A-bomb, but to celebrate its victory in ominously blithe unawareness of the new era to which their country had just introduced mankind.

Reverend Tanimoto had asked Mrs. Buck if she could gather a group of Americans who would help support his sewing workshop, but she said she herself was too old and tired. She knew of an American writer and editor, though, who she thought would help raise funds.

A few weeks later, on the first of many visits to the destroyed city, my father observed that Reverend Tanimoto’s small sewing workshop in Hiroshima functioned primarily as the young women’s protective haven from their compatriots’ uncompassionate eyes and mores. The thousands who perished instantly in the explosion, or who died later on from radiation sickness, could be reverently memorialized, but these young women – most of whom were still in their teens, the same age as the American’s eldest daughter – had lost face figuratively and literally. With their deformed bodies, and with faces obliterated in many cases beyond recognition by keloid scars, they stood for all to see as ignominious living reminders of Japan’s disgrace, defeated in a war that they themselves began.

Reverend Tanimoto and my father decided to create the Hiroshima Maiden Project, to send this group of women to the United States for plastic surgery. Contributions were solicited from readers of my father’s magazine, The Saturday Review, and the response was greater than anticipated.

At 8:10 on that August morning in 1945, Mrs. Tanimoto had just picked up her 8-month-old baby girl from the tatami mat where she’d been crawling when the world lit up strangely with a dazzling flash brighter than the sun. There was an ear-splitting roar, the ground thundered and trembled violently, and in the next instant, struck by a shock wave, the house collapsed on top of them.

Reverend Tanimoto had awakened early that morning to help a friend on the outskirts of the city. Now, burned bodies, living and dead, lay everywhere. He stepped over the unrecognizable corpses, and as far as the eye could see, there was an inconceivable sea of strangely glowing fire, consuming earth and sky. There was no earth or sky, only an inferno without beginning or end, populated by staggering, wandering, ghostly figures with melted eyeballs hanging out of their sockets, and burned skin hanging from outstretched arms.

As he fought his way through the firestorm in search of his wife and child, dying people reached out constantly, pleading for water. Each time, he could not refrain from stopping to bow, and to apologize, “I am sorry. I cannot help you” before pressing on.

The memory of turning away from those dying people would torment him for the rest of his life.

Ten years after his death, I came to Japan for a memorial to be given in honor of my father in Hiroshima Peace Park. At some point during my 10 days there, it occurred to me to ask Koko something that I’d never had an opportunity to ask any Japanese citizen. “Koko, I said, “it was Japan that started the war, with the attack on Pearl Harbor. And also, as a Jew…”

“I know. You are going to say that we brought the war on ourselves. And that the Japanese emperor supported Nazi Germany.”

“Sarah,” she said, “What you say is the truth. God punished us.

“I will tell you a story. One time, I was talking to a group of Americans about the Bomb and about the need for nuclear disarmament, and afterward when everyone else had left the hall, a man approached me. He looked down at me – he was very tall – and said ‘I was at Pearl Harbor.’

“I just stood there. Neither of us could speak. We understood each other.”

Koko continued: “While I grew up, my father and mother were always involved with the Hiroshima Maidens. They were working very hard on the church project, to help them. Because anyone who was damaged by the bomb was shunned by the rest of society. They had lost face. They were flawed. They held not only their own shame. They were a symbol of our disgrace and our punishment. Japan had lost the war that she herself had started. Those girls used to go around in veils to cover themselves because of the feeling against them. So my father opened up his church basement to make a workshop and got many sewing machines and they would all come there, all the girls. They spent their time there sewing. It was their honorable work.

“Pearl Buck came to see the workshop, and it was she who went back to America and told your father about it. When your father and mother came, in the beginning many of the girls would not show their faces, they were so ashamed.

“I myself had no scars from the bomb. But the Maidens, everyone paid much attention to them. So I felt left out. I felt my father did not pay attention to me. I was not so important! On the morning that the bomb fell, I was just an 8‑month‑old baby. I was a very active baby, my mother told me, and she was busy that day. She didn’t have time to be running after me through the house, keeping me from trouble, so she just picked me up and did her chores with me in her arms. That is why I survived. When the house collapsed in the atomic explosion, I was protected by her arms and I was not hurt.

My father tried to come home from the church, but there were so many people who needed help on the way that it took him a long time. He was thinking: ‘I must go home!’ He found the house and he heard us crying under the house and dug us out.”

Koko continues. “As the years went by, in one respect, it gradually became apparent that I too was not normal. I did not grow. So I was taken to the Atomic Energy Commission, because they were tabulating the effects of radiation on the population that had been near the epicenter. They found that this is how the radiation affected me. No other sign.

“Every year after year the bomb, the AEC held a convention in Japan, to discuss their studies and findings. I was one of their case histories. So every year, I was brought to the auditorium where they had their big meeting and I was taken up on stage. Each year, I was supposed to stand in my underwear and the doctors and scientists examined me and discussed my progress.

“When I turned 12, I was beginning, you know…” Koko gestured to her chest. “To develop, a girl. The AEC convention was meeting, and I was summoned as usual. They told me to undress. And I did not know how to…refuse them. So I did as they expected. The audience – it was full of male doctors and scientists, hundreds of them. And I stood on stage. They looked.

“That was my atomic explosion.

“That was my Hiroshima bomb.

“When I got older, I still did not grow. But when it came time to marry, I fell in love, and the boy loved me. But the boy’s parents refused to allow him to marry me because I had been damaged in the bomb. People did not usually know when they looked at me that I had been hurt. My scars were internal. But this family knew I was flawed.

“I did marry. But I could not have any children

“The American television program ‘This Is Your Life’ brought my parents and me to the US to do one of their shows about the Reverend Tanimoto, who saved the Hiroshima Maidens; he was famous by now. My father didn’t know that your father and Mr. Ralph Edwards, the moderator, had arranged secretly for me and my mother to come from Japan also, to be on the show. My father heard my and my mother’s voices and he was very surprised, and we came out to embrace him. My father cried. Then we got a shock. There was the voice of someone who was saying he was the pilot of the plane that bombed Hiroshima. This I could not believe. I could not believe this! I had always imagined this man and hated him. I’d grown up thinking that if I could kill that man, I would!

“Then we met him and I saw a tear in the corner of his eye. He cried.

“That tear saved me from hatred.”

Your Computer's Yom Kippur Message
Should I Break Up, Get Engaged or Keep Dating?
Time Is Your Precious Commodity
A Constant World in Flux
Comments
MOST POPULAR IN Current Issues
Our privacy policy