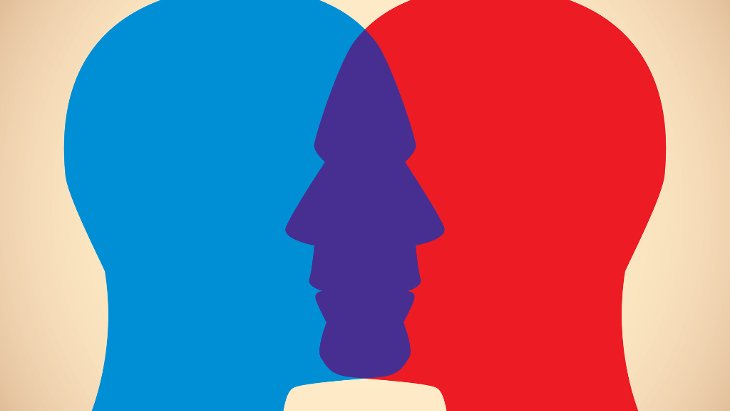 Harshness of our public dialogue is being driven by hardline ideologues who see the world through lenses so thick that they can’t understand each other's views.

I’d occasionally seen him in the gym – we both work out at the same Brookline Village health club – but we had never previously had occasion to speak. The other day, as I was using a weight machine near the front desk, I noticed him approach and speak to the staff member on duty. He motioned with apparent consternation toward the TV screens mounted on the opposite wall, and I heard him say the word "Fox." One of the eight screens was tuned to the Fox News Channel, and it became clear he wanted it changed.

"I'm sorry," the staffer replied. "Another member specifically asked for Fox to be put on."

He turned to resume his workout, plainly unhappy, and saw that I had been observing the exchange. "Are you the person who's watching Fox?" he asked me.

"No," I told him. "I don't like TV news. But what's the big deal? There are eight screens to look at. If you don't care for Fox, you have seven other options."

"That's not the point," he said (I'm paraphrasing from memory). "They shouldn't have Fox News on in this gym."

"But that is the point," I countered. "Why should it bother you if somebody's watching Fox? You can watch any of those other channels." Three of the screens were tuned to CNN, MSNBC, and CNBC, two were airing sports, one was showing a "Real Housewives" episode, and another had on a soap opera.

"No," he said heatedly. "They shouldn't be putting Fox News on in here! I don't want Fox thinking that there is an audience for their garbage in this neighborhood."

It seemed not to occur to him that if there wasn’t an audience for Fox News in our neighborhood – indeed, in our gym – we wouldn't be having the conversation in the first place.

"There's liberal propaganda and there's conservative propaganda. Why not just let people watch what they like?"

"I'm pretty sure that Fox News Channel isn't monitoring who watches what in Brookline Village," I remarked mildly.

"Yes, they do!" he snapped. "And nobody should watch it. It's all propaganda!"

"Those are propaganda too," I said, gesturing to the screens with MSNBC and CNN. "There's liberal propaganda and there's conservative propaganda. Why not just let people watch what they like?"

He talked right past me.

"It's all lies!" He was getting visibly animated. "Don't you care? He's ruining America! He's ruining this country!"

There was no need to ask whom he referred to. Nor was there any need to prolong the conversation. I don't go to the gym to talk about Fox or Donald Trump, let alone to be harangued by someone who thinks viewpoints he dislikes should be silenced. We each returned to our workouts. I never did find out who the Fox News viewer was in the gym that day.

Just another example of closed-minded intolerance in a civic environment grown excruciatingly polarized and tribal? Perhaps. It isn't the first time I've had the sense of living in a nation on the verge of a nervous breakdown. Surveys confirm the obvious: Political discourse in America feels more divided, angry, and stressful than most of us can remember.

Most Americans aren't as doctrinaire and intolerant as the guy I encountered in the gym. Research from the nonpartisan More in Common initiative has shown that the harshness of our public dialogue is being driven by ideologues on the "wings" – hardline progressives and hardline conservatives who see the world through lenses so thick that they not only lack empathy for each other, but cannot even understand each other's views.

In a new study, More in Common documents this "perception gap." It finds, not surprisingly, that the more intensely focused people are on politics, the more distorted their impression of those who disagree with them. Individuals most engaged in political issues and partisan affairs end up cocooned in "a powerful polarization ecosystem" that thrives on outrage and division.

The only antidote to that ecosystem is to walk away from it. Stop wallowing in politics. Tune out the strident voices on the left and right. Don't be like that guy in the gym, fuming because someone asked to watch Fox News. For that matter, don't ask to watch Fox News. If you need something to look at while you work out, I recommend the Food Network.

Getting Farfed
Don’t Believe in Other Gods Versus God is One
Seeing Without Eyes
Why Shouldn’t We Eat Whatever We Want?
Comments
MOST POPULAR IN Current Issues
Our privacy policy
Aish.com Is Looking for Great Writers