The Blind Woman at the Gym 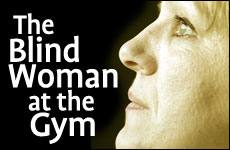 Learning how to see.

I already had my earphones on, and I was about to step on the treadmill in the gym when I felt a tug on my sleeve. I turned around to see an older woman with sunglasses and a walking stick standing before me.

"Can you help me onto the machine?" she asked. I helped her set up her walking stick beside the elliptical machine, and she smiled warmly. "Such sweet women in this gym,” she remarked. “It's so nice to be around all these lovely people every morning."

The woman felt around for the handles of the machine and steadied her feet on the foot pedals. Then she thanked me and faced towards the picture window, moving slowly but steadily. I stared at the stunning orange, red and yellow leaves swirling from the trees and then I looked around me, at the dozens of women exercising. I realized that I hadn't really noticed any of them before. I was always rushing in and out of the gym, constantly late for something. But this blind woman beside me noticed them. She senses people’s movements in a way I am not attuned to. She hears kindness in voices that I don't even hear, as I block out any sound with my own music.

"For most addicts, everyone else is traffic."

It reminded me of something a professor said when describing the loneliness most addicts feel when the object of their addiction replaces their social relationships. "For most addicts, everyone else is traffic." When an addict begins to spiral downwards, each person in his life becomes merely an obstacle to his goal of using. Connecting with others begins to feel like a waste of time. Relationships start to "get in the way" of what he wants. The addict travels down his futile road with great impatience, searching for instant gratification and wishing he could make anyone or anything in his path just disappear.

I drove home from class that day thinking about the professor’s statement as my car crawled along the highway. I thought about it as I stood on line at the grocery store waiting interminably. And it struck me – it's not just addicts, but so many of us view everyone else as traffic too.

The blind woman in the gym didn't have this problem. To her, everyone was a blessing and a hand to hold. And when I stood later that day on line at the supermarket, I kept reminding myself to try to see things the way the blind woman did.

Ironically, a customer at the front of the line was having trouble opening her pocketbook, and when she finally got it open, all her coupons spilled onto the floor. There was a collective sigh from the people on line. One guy talking on his phone said loud enough for all of us to hear, "Great, this is just what I need right now."

An older man who was standing in front of him spun around and asked, "Where are you rushing to? What is so important that you can't wait two extra minutes for someone to find her coupons? Why don't you help her instead?"

The man with the phone looked stunned for a minute, and then he went over to help the woman pick up her coupons while the rest of us stood frozen in place. "I just don't understand people today,” the elderly man shook his head and mumbled. “It's like no one can look up from their phone for even a second, everyone else is in the way."

Unpacking the groceries in the kitchen that day, I thought about another elderly man who had taught my husband and me a similar lesson when we first moved to Israel. We were going to buy a couch, and we were in a rush. Someone had recommended a tiny store that had good quality furniture. My husband met me there after shul one morning. We entered the store and the salesman greeted us, staring at my husband's tefillin bag.

"My grandfather wore tefillin. But I haven't worn tefillin since my bar mitzvah," he sighed. We stood there, not really knowing what to say. Somehow, "Can you show us which couches you carry in white leather?" didn't seem like the right question at the time.

"Do you want to put them on?" my husband asked.

The older, Sephardi man's eyes lit up. "But I don't know what to say, and I don't have a kippah."

Then he suddenly had an idea; he grabbed a piece of cloth from the desk and put it on his head.

My husband taught him how to put on the tefillin and showed him where the Shema was in his siddur. I needed to go because I was almost late for class. I gave up on the couch and left my husband there, teaching a man with a couch cloth on his head how to pray. I stood at the window for a moment watching my husband find another page in the siddur and thinking that we almost missed out. If I would have asked to see the couches...If my husband hadn't offered his tefillin...If we hadn't sensed the salesman’s special, yearning soul...If we would have instead seen him as being in our way, taking up our time, just traffic, we would have lost a precious opportunity to give.

Smile Though Your Heart Is Aching: Ethics of the Fathers 1:15

The 4 Happiness Habits of Purim

Ten Rules for Living Your Best Life
It Takes A Lot Of Faith To Be An Atheist
How Instagram Brought Back This Nostalgic Soup
What Makes Eli Run?
Comments
MOST POPULAR IN Spirituality
Our privacy policy