The Baltimore Riots: One Rabbi's Perspective from the Front Lines 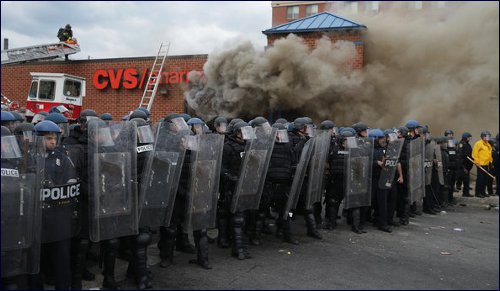 Recent events have left many of us on-edge. Here's what we can do to help.

(This article was written before Baltimore’s State Attorney charged six officers with felonies related to the death of Freddie Gray.)

When addressing current events or communal concerns from the pulpit, I endeavor to do so in the context of a Torah perspective. I always seek to distinguish between the Torah and my own opinion. What I share with you here is subjective. It is my hope and prayer that these personal reflections will offer some comfort and guidance during a time of great turmoil and pain in our city.

Over the years, I have come to believe that each of us resides in our own emotional neighborhood. We all have certain “default” patterns of feelings that we experience and express in response to outside events. In times of stress, we often become “more” of who we already are: people who are predisposed to anger become angry, the anxious become more fearful, those who tend toward depression become sadder, etc.

For many, the reaction to scenes of mayhem in Baltimore city this past week was predictable. Libertarians, Democrats, Republicans, progressives, conservatives, conspiracy theorists, secular-humanists, religious fundamentalists, all had their “take” on why this was happening. The savvy information consumer most likely knows how CNN, FOX,or MSNBC will report on the very same event in an attempt to validate the conclusions already reached by their respective viewership or to indoctrinate the newbie.

Our biases draw us to connect with others who reside in emotional neighborhoods similar to ours. This is especially true for the growing number of people who rely on social media or blogs for their news. These platforms are often echo-chambers of kindred-spirits as opposed to platforms for spirited debate. Safe space for open exchange of ideas, critical thinking, or in-depth analysis appears to be rapidly diminishing.

“R. Abba stated in the name of Shmuel: For 3 years there was a dispute between Beit Shammai and Beit Hillel, these said, ‘The Halacha (Jewish law) is in agreement with our views’ and these said, ‘The halacha is in agreement with our views’. A Bat Kol (often understood as “heavenly voice”) emerged and said to them, 'Both these and these are the words of the living God, but the halacha is like Beit Hillel’. (The Talmud asks) Since both are the words of the living God’ what was it that entitled Beit Hillel to have the halacha established in agreement with their rulings? Because they were pleasant and humble, and they studied their own rulings and those of Beit Shammai. And furthermore, they (Beit Hillel) gave precedence to the words of Beit Shammai before their own.”

Beit Hillel and Beit Shammai argue over many points of Jewish law. They even have several philosophical disagreements. In practice, the law follows the majority position of the sages, which most of the time was represented by Beit Hillel. Nevertheless, our sages assert that even when only one school “won” the legislative vote, both have viable positions that can be substantiated as a legally valid position.

The Talmud should not be misinterpreted to mean that “everyone” is right. The Talmud presents plenty of cases of faulty reasoning, misapplication of legal principle or misunderstandings. The point here is that Torah allows for two opposing positions to occupy the same Divine space.

The Talmud is also teaching us that the manner in which we engage in debate and how we treat our intellectual adversaries holds great value.

We live in a world that values sharpness over courteousness. Superficial and repetitive talking-points have become the norm. Opposing perspectives are not only ignored, they are shouted down and trampled. We are talking at each other and not to one another; too much speaking, not enough listening.

During what Mayor Rawlings-Blake described as “one of our darkest days” in Baltimore, hearing the reports of Freddie Gray’s arrest and death, watching the protests and riots, seeing the police show restraint in the face of lawlessness and taunting, hearing from victims of assault, thievery, and arson, watching politicians struggle towards balanced leadership – the human tendency is for us to retreat and entrench ourselves in our emotional neighborhoods. This is understandable but this instinctive response only leads to greater polarization and hopelessness.

Recent events have left many of us on-edge. We are worried about the future. We want to do something to help, yet we are feeling quite helpless. In the absence of platitudes or grandiose plans, I humbly submit the following:

As Parents: When discussing the events of the day, let's be mindful that our children are “all-ears.” Their worldview, their sense of security, justice, and proper conduct will come from listening to what we say and watching what we do.

As Lifelong Learners: Let’s take a lesson from Beit Hillel and listen before we speak. We would all benefit from more gentleness, patience, and humility.

As Friends: Instead of scouring the media for more information, take some time to reach out to someone who you know who lives alone or who might be anxious about what has occurred. See what you can do to help someone whose business has been adversely affected by the riots. Giving time and attention to those in need is also a form of tzedakah.

As Community Members: Our primary obligation is to ensure our own safety and to help ensure the safety of those around us. Perhaps it is not yet safe for us to help clean up and rebuild what was destroyed in downtown Baltimore. That time will come. For now, we can at least make a moral commitment to help those who have less than us, people, who, due to no fault of their own lost their houses, their cars, and their livelihoods to senseless violence.

As Jews: We have a responsibility, not only to one another but to the world at large. How we engage the world around us in the way that we speak, how we behave in public, and how we conduct ourselves in business, all have the potential for Chillul or Kiddush HaShem, profaning or sanctifying God's Name.

A closing thought from Ethics of the Fathers (3:2): “Rabi Chanina would say: Pray for the integrity of the government (malchut), for without the fear of it, people would swallow one another alive.”

While the Torah expects all of us to exercise self-control, the external controls of government are often necessary for ensuring civility and public safety. Irving Bunim suggests that the term “malchut” might also refer to Malchut Shamayim, the Heavenly Kingdom. With this in mind, let us pray that God’s presence be recognized and acknowledged in this world thereby motivating humanity to strive towards greater social virtue.

A passionate educator and dynamic orator, Rabbi Dr. Daniel Lerner’s unique blend of wit, wisdom, and spirit has endeared him to audiences throughout North America, Israel, Australia, and South Africa. He is currently the Rabbi of Pikesville Jewish Congregation and on the faculty of Yeshiva University. Rabbi Lerner received his ordination from Ner Israel Rabbinical College in Baltimore, his M.S. in Education from Johns Hopkins University and his M.A. and Doctorate in Psychology from the American School of Professional Psychology in Washington, DC. He is the founder of Strategic Family Solution, LLC, where he serves as an adviser and confidant for high profile and affluent individuals whose relationships, businesses, and wealth are threatened by issues related to: marital discord, intergenerational friction, antagonistic divorces, sibling rivalry, and addiction. Rabbi Lerner's clinical experience has encompassed treatment for gambling addiction, anxiety, pathological narcissism, interventions for at-risk youth, as well as couples/family therapy. He has lectured on ethics, spirituality, and professional conduct at The Johns Hopkins University School of Medicine, and at the University of Maryland and University of Baltimore law schools. Rabbi Lerner, together with his wife Alyson and their children, resides in Baltimore, MD

For God's Sake
It Takes A Lot Of Faith To Be An Atheist
How Instagram Brought Back This Nostalgic Soup
What Makes Eli Run?
Comments
MOST POPULAR IN Current Issues
Our privacy policy