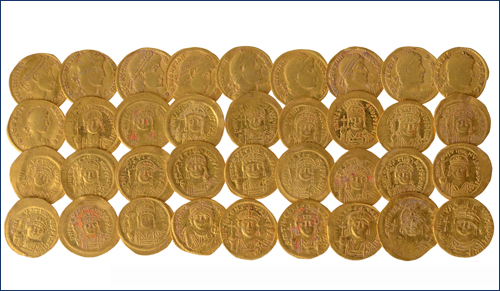 "A discovery like this happens once in a lifetime! It is breathtaking!"

That is the way Eilat Mazar described the exquisite gold medallion engraved with a menorah, a shofar and a small sefer Torah (Torah scroll), that was discovered in her latest dig in the Ophel Excavations. 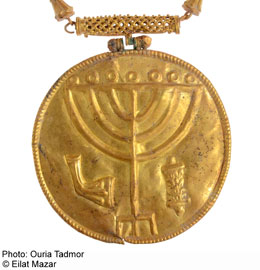 And that's not all. Along with the medallion, 10 centimeters in diameter and on a gold chain, her team found gold jewelry and coins, a virtual treasure trove, all of them in a Byzantine structure, 50 meters south of the Temple Mount, just outside the southern walls of the Old City of Jerusalem.

These comprise two gold hoards from the 6th century, and what makes it all the more fantastic is that it was totally unexpected.

They were only five days into the dig when Caridad (Cari) French, a young digger from abroad, together with Ahinoam Meyers, her Israeli digging partner, found what she thought was a copper earring, then another one. The women thought that they were modern, since they were so shiny, but then they dug some more and found gold coins, and the rest of the diggers, including Mazar herself, joined them, instructing everyone to use no sharp objects, only small paintbrushes to softly brush away the dirt. Suddenly the gold medallion came into view. Cari says in a short film made about the discovery: "My eyes were lit up. I'd never seen anything like that in my life."

Mazar states unequivocally, "The Bible is the most important historical source."

The discovery is all the sweeter because Mazar is considered controversial among some Israeli archeologists. She flies in the face of what many of them believe to be more scientific methods, because her blueprint has always been the Bible. She states unequivocally, "The Bible is the most important historical source." 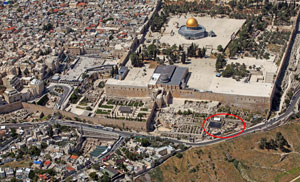 In April, 2013, Mazar had begun the latest phase of her dig at the Ophel, with hope of finding more evidence relating to the period of Solomon's Temple, which she did as well. "I always consider my whole excavation, revealing the monumental construction of the 10th century BCE in Jerusalem, related to King David and King Solomon, as the most important enterprise in Jerusalem,” she told Aish.com when asked what she considers her most important finds. “It's not one item but a very large excavation project.”

"Revealing more about tenth generation BCE Jerusalem, from the Biblical period, is what inspires me every day, and I feel it is the pick of my archeological excavations." She is especially proud of “the Solomonic wall, the fortification line, along the Ofel area. Every year we go back there and we reveal another portion of the same thing.

"But I feel obligated to all periods related to Jerusalem. What we revealed on September 9th to the public is the treasure hoard of the Byzantine period.

"We did expect to find strata, layers of living, but we didn’t expect to find any hoards. We were at the early stages of a Byzantine layer when gold coins began to appear and there were more and more and then we came to the big medallion with Jewish symbols." 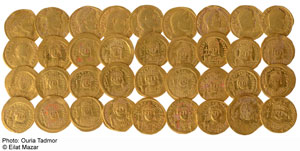 Mazar describes her partners in the dig. "They are young people from abroad, volunteer students of Herbert W. Armstrong College from Edmund, Oklahoma, who come for the whole season. There are young Israelis who are paid workers and most of them are students. Some are students of archeology but not all." Armstrong students have been volunteering at Mazar's digs since 2006. This year there were 13 of them, one-third of her workforce. The work is done on behalf of Hebrew University, in cooperation with the Antiquities Authority and the Israel Nature and Parks Authority. Mazar is also a senior fellow at the Shalem Center.

The only other medallion of similar, though not identical, qualities is on display in the Jewish Museum in London, its origins unknown. Reuven Peretz, archeologist and historian of the Hebrew University Institute of Archeology, says that the symbols on the medallion of the menorah and the shofar were common during the Byzantine times, but the symbol of the sefer Torah was usually found outside of Israel, in Rome or elsewhere. The medallion in London, he says, has a Greek inscription on it, noting that it was donated by Jacob, the leader of the synagogue and community, who was also a pearl-setter, and therefore probably a wealthy man.

A medallion such as this has never been discovered in any dig.

"A medallion such as this has never been discovered in any dig," says Mazar, "and just as startling as the medallion itself is the symbol of the sefer Torah next to the menorah. In all the scores of examples, of floors of ancient synagogues where a menorah appears, it has by its side the symbols of the shofar, of the four species [that are used on Sukkot] or other items, but on the gold Ophel medallion there is the rare symbol of the sefer Torah. This indicates to us that the medallion was used to adorn a real sefer Torah."

And as such, she says, it is the oldest known artifact of its type.

Why Were They Hidden? 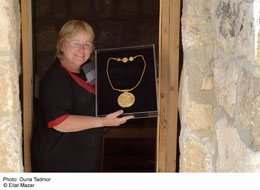 Mazar believes that these treasures were brought to Jerusalem by Jews from abroad, who were told by the Persians, who had conquered the city in 614 CE, that they could once more settle in Jerusalem. This raised their hopes greatly, especially after the hundreds of years that it had been forbidden to Jews to settle there. She believes the coins may have been intended to purchase land, build synagogues, and perhaps even to build the Temple.

But the Persians began to lose power and then reneged on their offer, enabling the Christians to banish the Jews from the city.

Mazar: "The Jews who hid these objects probably had to run away, to save their lives, and they were never able to come back to rescue this hoard." So the treasures were buried, possibly with the dream that they would someday be redeemed. And now they are.

Mazar's past discoveries are documented in her books The Complete Guide to the Temple Mount Excavations (2002) and Discovering the Solomonic Wall in Jerusalem: A Remarkable Archaeological Adventure (2011). Oded Borowski of The Biblical Archaeology Review wrote, "One of the crown jewels in Mazar’s still-young career is her discovery of a wall that was likely part of ancient Jerusalem’s fortifications during the tenth century B.C.E., believed to be the time of King Solomon."

And now there are more jewels to add to that collection. For along with the medallion were found earrings, bracelets and 36 gold coins. Some of the items had remnants of fabric on them, indicating that they were at one time packaged in two separate cloth purses. The coins were scattered, as if left in a hurry; the other items seemed carefully packed away. Mimi Levy, Head of the Preservation Laboratory at Hebrew U., describes how she had to use very fine scalpel blades, working very delicately, to clean the items, all done under a microscope.

Numismatics expert Lior Sandberg says that this is only the third gold hoard of coins to be found in Jerusalem in the last hundred years, and is a phenomenal discovery on its own. There are ten coins from the 4th century CE and 26 coins from the 6th century CE, ranging over 250 years, from Constantine II to Mauricius.

Ancient Hebrew Script, a Cave and Head of a Lioness

Mazar considers one of her most important finds during the previous digging season a piece of pottery with writing on it, originally believed to be Canaanite or Jebusite writing. In fact, an entire theory was developed by researchers about how David and Solomon must have understood the importance of having scribes in their courts who knew other languages, but Mazar says, "In fact, when more research was done, they discovered that it is the most ancient Hebrew script ever found. The pottery seems to have been used to hold wine, but it was wine for cooking, not for holy services."

Another exciting discovery is described in a short film by Brent Nagtegaal, instructor in history at Armstrong College and Mazar's supervisor of the Area B digs (there are three areas). The cave that is being excavated in the Ophel area was originally an ancient water cistern with entrances from three different directions, used during the first Temple period, situated beneath first Temple houses.

But as Mazar's team dug in different directions, they discovered that there were also layers from the Herodian period, walls that had been built later, and that in addition to those walls were tunnels that had been built into bedrock, with signs of hand and foot holds, and places where candles would have been placed.

Josephus describes tunnels such as these, in The Jewish War, about how the Jews tried to create places to hide during the Roman siege on Jerusalem, so they would be able later to escape. Nagtegaal points out that at some point a few of the tunnels stopped, only 20 centimeters in, and he conjectures that it was at that point that either the Romans broke through, or the Jews thought they had no more time and would have to hide themselves.

Unfortunately, we know from history that even the desperate digging of the tunnels did not rescue them from devastation.

On the first day of the 2013 dig, they also discovered a sekhmet figurine. It has the face of a lioness and a human head. They have found several of these and are studying what role they played in Jerusalem during that period of 10th century BCE.

In a small country like Israel, as miraculous as the discovery of the golden treasure, is the fact that for five months the entire excavating team kept the secret until Mazar revealed it to the world on Sept. 9.

Fourteen centuries after Jews buried their precious treasure and fled from the persecution of Christians, young Jews from Israel and young Christians from abroad are working with a veteran Jerusalem archeologist to uncover the story. The seven-stem menorah, created for the Holy Temple and depicted on the arch of Titus in Rome as a symbol of the Jews going into exile, is today the official symbol of the State of Israel.

It would seem to be the fulfillment of the Biblical verse "Even them will I bring to my holy mountain, and make them joyful in my house of prayer…for my house shall be called a house of prayer for all people." (Isaiah 56:7).

This new  part of the Ophel site will soon be open to the public, so that all can partake of its wonders.

For some of the information in this article, the author was directed by Dr. Mazar to the project website: www.keytodavidscity.com. The author is an award-winning theater director and editor-in-chief of WholeFamily.com. Her daughter directs the sifting crew under Dr. Mazar.

Jerusalem: Eye of the Universe

The Temple Mount: A Jerusalem Day Tour from the Aish HaTorah Rooftop