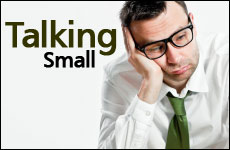 Don’t talk to me about the weather, the food at the wedding you went to or how bad the traffic was – I hate small talk.

I think I might be antisocial. It’s not that I don’t like people; I just don’t like making small talk with the ones I don’t know.

I guess the main problem is trying to come up with a topic that you can easily discuss with someone whom you don’t really know well enough to subject to a personal rant about how your mother is insulted at you. That’s a privilege you save for your close friends. So you try to talk to him about small things, such as how everyone he knows is feeling. But if they’re all feeling fine, God forbid, the conversation dies down pretty quickly.

Ironically, if you had to describe my entire column in two words, they would be “small talk”.

For a while, I told myself, “I’m a writer; I should be able to think of conversation topics.” After all, if you had to describe my entire column in two words, they would be “small talk”. On the other hand, I have to come up with a lot of those topics every year, and most of them are conceived through last-minute panic two days after my deadline. So there’s no way I can come up with even more topics for an audience of one person I barely know, and even if I do, I’ll probably come up with them a day or two after the party.

It shouldn’t be this hard. I get the feeling, listening in on other people’s small talk while pretending I have something important to do in the background, that a lot of small talk is about following up on previous topics. Like if the last time we were in an elevator together you mentioned that your son was going for his high-school interview, this time I would ask you how it went. But my problem is that I can never manage to jumpstart a topic that first time. I’ll ask someone, “How is your son; the one in eighth grade?” and he’ll say, “Good”.

Thanks, that’s a great story. Next time I’m going to have to follow it up with: “So how’s your son? Still good?”

I hope the elevator doesn’t get stuck.

And that’s the other issue. Some people, usually the people you get stuck talking to, tend to gravitate toward the most boring conversation topics. Here are some of the topics they find fascinating:

The issue with these topics is mainly that you have nothing to add, so you’re stuck waiting for the other person to finish talking. Or you can scrape the bottom of the barrel for follow-up questions. (“I see. And did it come with potatoes?”)

What I generally do, because I don’t like being impolite (I don’t like making small talk, but I don’t like being impolite either. It’s a horrible combination.), is I space out about something else, and I nod my head a lot. I have also trained myself so that, when I subconsciously hear certain types of pauses in the other person’s monologue, I can insert the appropriate comments, such as, “Really?” or, “Yeah, whatayegonnado.” And if the speech ended with a question mark, I shrug my shoulders and say, “I don’t know,” and then magically it starts up again. And apparently I’m really good at doing this, because these people have no idea I’m not listening. They can go on for hours.

Also, some people just don’t know when to end a conversation. I have this one relative who calls several times per day, whenever she has the tiniest thought about anything. So you’d think that each conversation would take about 2 minutes, right? Wrong. Because when we’re done, we stay on the phone for a while saying things like, “So…”, and “Uch, my computer is so slow today.” And I’m too polite to end the conversation. But I do try to drop hints.

And then there are the people who, whenever you see them, talk about the same one or two topics. For example, I’m a high-school Language Arts teacher, and if there’s anyone that teenagers find boring, it’s their teachers. Look at it from their perspective: Every day this guy comes in, and he talks about grammar. Grammar grammar grammar! I get it! Imagine if you went to a party every day, where someone talked to you about the same topic that completely bored you, and then every time you were bored to the point where you started tuning out, he announced that there’s going to be a test on what he just said.

So yes, I go to school every day, where I get the feeling that I’m boring, and I see boring people who don’t even know they’re boring, and I’m like, what if I’m one of those people? So I’m afraid to initiate small talk.

Speaking of which, I should go. I have a lot of stuff to do. In the meantime, feel free to forward this article to certain key people in your life, as sort of a hint. Don’t worry, you won’t be insulting them. They’re not going to get what you’re trying to do anyway.

Jimmy Carter and Khaled Meshal Wed in Secret Damascus Ceremony
Why Are The Prayers Of Yom Kipur So Repetetive?
Ha'azinu 5783: A Time for Unity!
Twisted Thinking
Comments