Swimming through the Pain

Ten years ago Asael Shabo lost his mother, three siblings and a leg to a terrorist. Now he’s on course to the 2016 Olympics.

The terrorist attack seemed to last a lifetime. Nine-year-old Asael Shabo played dead on the living room floor of his family home in the Samarian town of Itamar on June 20, 2002 while an Arab terrorist killed his mother and three of his siblings. With nine bullets and more than 200 pieces of shrapnel in his right leg, Asael didn’t cry out, but neither could he crawl to safety outside the house. All he could do was wait until the slaughter was over, 45 excruciating minutes later.

After the attack, doctors fought hard to save the leg but were forced to amputate. Asael awoke the next day after 10 hours of surgery to a room full of people, including rabbis, social workers and other members of his family who had to deliver the brutal news: His leg was gone, as were his mother, 39-year-old Rachel Shabo, and three of his brothers, 16 -year-old Neria, 13-year-old Tzvi and 5-year-old Avishai. Yossi Twyto, a member of the community security detail who raced to the scene upon hearing the first shots ring out shortly after 9 p.m., was also killed. Only his father and one brother, who weren’t home at the time, survived the night physically intact.

It is hardly the type of beginning that leads to championship sports competition, but 10 years after the attack, Asael is a standout athlete at the Israel Sports Center for the Disabled in Ramat Gan and is training for the 2016 ParaOlympics in Rio de Janeiro, Brazil. He is Israel’s national champion for the 50-meter freestyle and a member of the national wheelchair basketball team – and coaches younger kids in both sports.

The physical aspects of his training were nothing compared to the emotional ones.

With his body and family in tatters, sports provided Shabo with a framework for a long, grueling rehabilitation program. Aside from learning to function with just one leg, the process included exercising muscles that had atrophied during his long hospitalization and learning to maneuver first with crutches, later with a prosthetic leg crafted for him by a New York firm and paid for by private donors. But he says the physical aspects of his training were nothing compared to the emotional ones.

“I first came to the Center about a year after the attack, mainly for hydrotherapy,” Asael says. “Learning to swim was tough, but after I learned how to swim properly, being alone in the water gave me two important things: It gave me the quiet and the solitude to digest and internalize what had happened, and it gave me a physical outlet to work through the emotional pain of watching my mom and brothers murdered. I literally swam my way through the emotional turmoil I was going through, and the mental anguish I went through for years afterwards.” 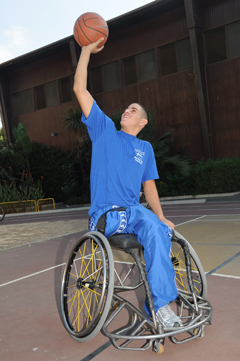 A decade after the attack, years that have included an intense course of psychological care, the effects of both the attack and his physical rehabilitation are readily visible on Asael’s face and body. His chiseled, unshaven face sits atop the muscular body of a young man in the prime of his life, a dedicated athlete who has spent years developing his upper body strength. His physical presence in the pool is strong enough that one does not immediately notice that the swimmer is missing a leg.

But a deeper look into Asael’s eyes shows the face of a traumatized 9-year-old, bearing the emotional scars of that horrific night. He speaks openly about his mother and brothers, as well as about his family life since the tragedy, and the conversation emanates from a scarred place deep inside.

“I met Asael a year or so after the attack,” said Slava Longo, a swim coach at the Center. “He wasn’t really shy, but he was frightened and withdrawn. I can’t say that he took to the water as soon as he jumped in – at first it was just another one of the sport activities that the center offers, and he enjoyed it. I didn’t think anything of it, and it certainly didn’t occur to me that he was going to be a competitive swimmer."

The switch came a few years after Asael started swimming. Coach Longo had taken an 18-month break from coaching, leaving Asael to try other sports. “When I got back from my sabbatical, he’d obviously done a lot of hard work and began spending long hours in the pool. That’s about the time we started seeing a marked difference in his demeanor and outlook on life. His remarkable inner strength took over, and he began to digest the tragedy he’d been through and he began to visualize a real future for himself. It was a phenomenal process to watch and to be a part of,” said Slavo.

The Israel Sports Center for the Disabled has amenities for nearly every sport imaginable. More than 3,000 children and adults with at least one significant physical disability take part in more than 20 sports activities, including swimming, basketball, tennis and more.

The Center’s message is clear and potent: Children have the ability to overcome their physical limitations in order to succeed, in sports and in life. Children and staff alike here radiate accomplishment and optimism.

For Asael, the center has also served as a neutral ground on which to make peace with God. For his parents, Boaz and Rachel Shabo, living in the Land of Israel according to the dictates of Torah and building the Jewish people was the cornerstone of their faith and family. In the aftermath of the terror attack the surviving members of the family had their own arguments with the question: How could God have allowed such an attack to occur?

“Eventually, I had no other choice but to set those questions aside and to draw strength from Judaism.”

“There are obviously questions about God that we cannot answer,” Asael says, as he describes the internal wrestling that started as a 9-year-old. “What sort of answer could I get that would be sufficient? But for better or worse, that’s the way God created the world. There are many questions we do not know the answers to, but that doesn’t mean there are no answers. Eventually, I had no other choice but to set those questions aside and to draw strength from Judaism and performing mitzvot.

“Of course, it took me some time to get to that point – my dad and my older brother were phenomenal role models, but I still find a lot of solace from putting on tefillin, keeping Shabbat and from living in the Land of Israel,” said Asael.

Looking to the future, Asael plans to continue training and coaching at the Center, with his eyes focused on getting to Rio de Janeiro in four years. A year ago, he added wheelchair basketball to his resume and has represented Israel in both sports in competitions in Europe and North America, Now working as a coach for young children at the Center, he says his story “might be more dramatic” than kids who lost limbs in traffic accidents or who were born with congenital conditions. But he quickly adds that his role is to provide a living example that physical and emotional disabilities do not have to be obstacles to living life to its fullest.

Like other Israeli teens, he’ll be inducted into the IDF later this year, into the  Intelligence Corps. That role will allow him to continue his work coaching and training in Ramat Gan, albeit on a more limited basis, as well as the freedom to dream and plan for a future in physical education or possibly business. No matter where life leads, Asael says he is thankful for the emotional tools to succeed and to make his parents – both of them – proud.

“My father has been so strong through all we went through, and I feel my mom and my brothers’ presence in my life all the time. Their support and their guidance has seen me through everything I went through, and has given me the tools I need to succeed. That’s a recipe for a lot of achievements. I’m thankful to be able to say I have a lot to look forward to.”

Rising Above the Vicissitudes

The Guru and the Hasid

Tom and Jerry and Me
Saadiah Gaon, Rashi and Maimonides: How Three Rabbis Revolutionized Judaism
King Sennacherib and the Siege of Lachish
Three Small and Easy Changes to Add Positivity in Your Home
Comments