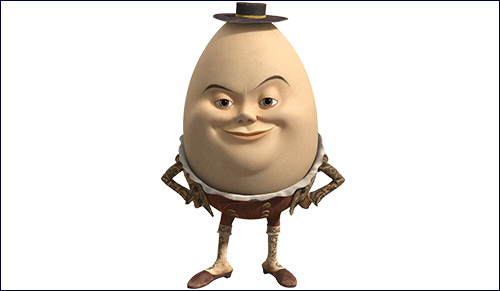 Here’s a sure fire tip if you want to be remembered for posterity: do something really embarrassing. Humanity promises not to forget.

In life, there’s being unsafe, and then there’s just asking for it. Take the famous tale of Humpty Dumpty:

That’s the whole tale. Really; I didn’t leave anything out. But the moral of the story is that you shouldn’t sit on a wall.

Why don’t people remember Humpty Dumpty for being an egg that can climb walls?

Or an electric fence, for that matter. I’ll tell you what: If your feet don’t reach the floor, don’t sit on anything without a back. If you do, you’ll fall, and the king will send his horses with their big hooves to stomp all over everything in the hopes that they’ll accidentally put you together again, and if that doesn’t work, he might also send his men. (What kind of men? Does he send all the men in his kingdom? Or does he send mostly the palace guards, i.e. the people who come running when he yells, “MEN!”?) You’d think he would have sent some doctors. Or his mother. My mother can assemble a 10,000 piece puzzle of a dark, starlit sky in under an hour.

But my point is that this is Humpty Dumpty’s story. This is the only thing he’s famous for. Check the history books if you don’t believe me. Yeah; check ALL of them. He is not famous for one other accomplishment in his entire life, like for example the fact that he was an egg that could climb walls. That’s not even mentioned in the poem. In other words, if you do something dangerous and stupid, that’s all people will remember you for.

Ok, so there are exceptions. Sure, Benjamin Franklin flew a kite in a lightning storm, and the fact that he discovered important things about electricity means that it did not end well for him. But he’s still known for some of the other stuff that he did. They definitely didn’t put him on the hundred dollar bill for getting hit by lightning. In fact, he’s one of the only non-presidents on our currency, and he’s on the highest bill that most people have seen. So I figure he must have known somebody.

But for the most part, when it comes to being unsafe, some people are just asking for it, and unless you know somebody, like Benjamin Franklin did, that’s all you’ll ever be famous for.

My case in point is all of the following people, all of whom have appeared in recent news stories. There are no other news stories about these people. That was it. So some people exist mainly to serve as a lesson to others.

Take the man in Michigan last month, who, according to an AP article, called 911 to say that he was camping in the park, and a 5-foot boa constrictor had just slithered out of his camper.

“Wait, did you just say “out”? Then you’re safe now, right? Why call us? Could you just not get to the phone before?”

“No,” he said. “The snake is mine. I brought it from home. I’m calling to report it missing. On a public campground.”

Seriously, you brought a 5-foot snake camping? You don’t have ENOUGH problems? What did he think; the snake would sit around the campfire and eat s’mores? Personally, I would take a vacation to get AWAY from my snake. Not that I ever had a snake. I didn’t really have any pets growing up, except for goldfish. But I certainly never took them fishing. (“Hello, operator? He slipped into the water.”)

Authorities are still on the lookout for the snake, although the man said that it’s “young, and not harmful to people -- just small animals and so on.” Like if someone brought his hamster camping or something.

My guess is that he couldn’t find someone to watch it for him when he went on vacation:

“Can I leave my snake at your place?”

“Really, it’s not a big deal. It’s only harmful to small animals and so on.”

So he’s never going to find it. Snakes can slip through some really tiny places, tinier than humans can. But that doesn’t mean we don’t try, as is evidenced by the inordinate amount of news stories of people, in some way or another, getting stuck.

For example, a few months ago, a boy got stuck in a claw game machine, making him the 500th kid to do this in the past 10 years.

You know the kind of machine I mean. You give it money, and in turn, you are allowed, for ten seconds, to play with a claw that will never in a million years pick up the stuffed animals in the machine. The key, I hear, is to go for the ones that you think you can pick up, not the ones you actually want.

That’s an efficient use of money.

But it’s only 25 cents, and you might get a stuffed animal, which you have too many of in the first place! And there’s a big enticing glass display, with all the animals you can win in clear view of your kids, and there’s a prize hole at the bottom that’s just big enough to crawl through if you’re the age of kid that likes stuffed animals.

So what happened was, the child’s father turned his back for a second, and the next thing he knew, his kid was in the machine. He was in there having the time of his life, hugging all the animals, and the only person involved who was worried was the father. It took rescue workers about 45 minutes and 76 quarters to get the boy out.

And if kids are getting into small spaces when they’re young, it only leads to a life of continuing to do so when they’re older. Last May, rescue workers were called to save a man at a sausage factory in Danvers, Ma, after he got stuck in a sausage-making machine. (The man was uninjured.)

Actually, the word the article used was “inhaled” into the machine. That’s how the machine works.

See, that’s why they say you don’t want to know how the sausages are made. Apparently, they’re made by the machine inhaling whatever happens to be standing next to it.

Actually, though, the man was a janitor, and apparently he got pulled in while he was trying to clean the machine. They found him with his head and arms stuck inside, though if you ask me, it sounds like he was trying something, like that kid with the claw machine. Like he was in there, happily hugging all the sausages. He just told rescue workers that he was inhaled, to draw attention from the fact that he was noticeably heavier.

There are also a lot of stories of burglars getting stuck in vents, chimneys, and windows. Also, in June, a Pittsburgh fire crew was called to rescue a woman who got her hand caught in an ATM machine.

People always call the fire department for these things. Little kids are always saying they want to be firefighters when they grow up, but more often than fires, firefighters are called to get people unstuck from places they shouldn’t be. This is as opposed to the old days, when getting people unstuck was the job of horses and men. And half the time, the horses and men couldn’t do it.

They weren’t very successful at putting out fires, either.

UJM Ceasefire Agreement
In the Shadow of David and Goliath
Where Do the Laws of Nature Come From?
Saadiah Gaon, Rashi and Maimonides: How Three Rabbis Revolutionized Judaism
Comments