Stuck in Harvard, Dreaming of Yale 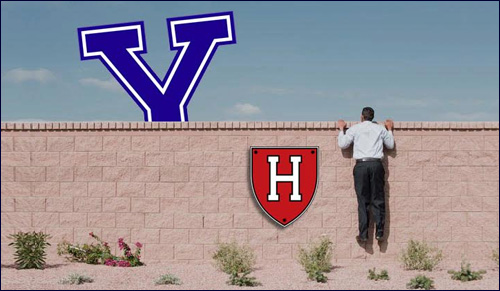 Haman, jealousy and the curse of never having enough.

My new patient wasn't too happy with the way things had turned out for him.

"My college roommate got into Yale Law School and I got rejected," he said. It clearly wasn't good enough that he was towards the top of his class at Harvard Law School.

"The kid who sits next to me in lecture got the best internship this past summer," he lamented. He felt that his own prestigious clerkship for an appeals court judge was chopped liver.

"My friend's wife always puts a note in his lunch when she packs him a sandwich," he said. It didn't matter that his wife was busy caring for their newborn, had just returned to her position as a special education teacher and happened to be a very nice lady.

In his own eyes, this poor guy was suffering worse than Job himself, even though in reality his life was pretty darn good. He had a terrific wife and baby at home, he was about to graduate from the #2 law school in the country (who would have though Yale was better than Harvard at anything?!), and he was in good health. He really had nothing to complain about, especially when compared to the majority of my patients who were suffering from major mental illnesses.

It was time for something radical so I told him, "You're being like Haman." (I knew that my patient was a well-informed Jew.)

"That's absurd," he snapped. "Haman was one the worst people that ever lived and he tried to wipe out the entire Jewish people."

He was right about that. But Haman was also constantly jealous and that was the root of his bottomless hatred for Mordechai and the Jewish people. Haman was a ridiculously successful businessman with immense political power and a brood of loving kids at home, yet he couldn't even smile when he walked in the door.

The Book of Esther says that Haman complained to his wife, "All this means nothing to me as long as I see that Jew Mordechai sitting at the King's gate [and refusing to bow down to me]," (Megillat Esther 5:13). The same held true for my patient who was constantly comparing himself to others, losing track of his own blessings in the process, and driving himself clinically bonkers! Despite his enormous blessings, he felt he had nothing.

A jealous person can never find peace in this world.

My patient went on the defensive. "Everyone is always comparing themselves to someone else, that's just human nature! Don't you think that Lebron James is also suffering? He'll never be satisfied because he's not Michael Jordan!"

Little did my patient know that even Michael Jordan was sitting somewhere in North Carolina at that very moment, fuming over the fact that he would never again be as good as Michael Jordan was back in 1996. But that wasn't the point of this discussion either.

Our Rabbis teach us that jealousy is one of the three things that "removes a person from this World," (Ethics of Our Fathers, 4:28). A jealous person can never find peace in this world. Nothing will ever satisfy him. There will always be someone out there who has more and is better. He is constantly at war with the rest of the world, forced to cut everyone else down because he's lacking on the inside.

I told my patient, "Be grateful for everything you've been given and it won't matter if you aren't at Yale with a special sandwich, a note, and the best jump shot in history."

He looked pretty angry so I said, “There’s a part of Haman in each of us. Here was a guy who was blessed with amazing things but just couldn't be happy with what he had. All I’m saying is that we should appreciate what we have in our lives. Maybe that’s why we hand out gift packages to each other on Purim, reconnecting to the brotherly love between fellow Jews."

He looked less angry and said, “I realize I’d be a lot happier if I’d stop comparing myself to other people. Luckily I still have a few weeks until Purim to work on it."

The author would like to thank Avraham Moshe Goldberg for his assistance with this article.