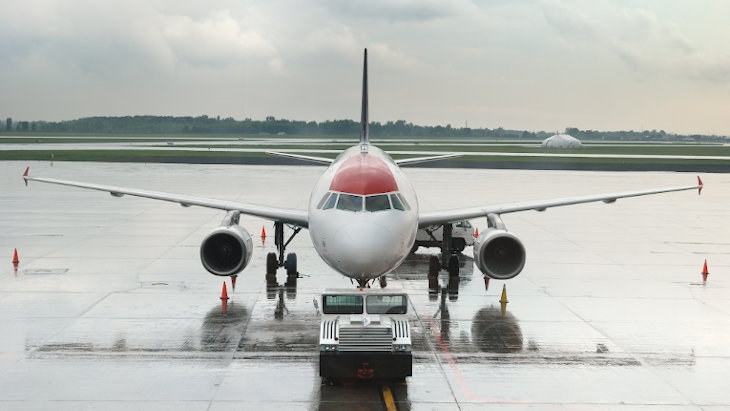 You never know the impact of one act of kindness.

Last week I landed in an airport in Texas. It was pouring outside and Rabbi Menachem Block, who had invited me to speak, met me at the airport. My talk was scheduled for that evening in his synagogue, the Chabad of Plano, Collin County.

As we drove, I looked around and asked, "Rabbi Block, how did you end up here? Were you born here?”

“No,” he replied with a smile. “I actually grew up in a place I doubt that you've heard of. London, Ontario.”

“London, Ontario?” I couldn't believe it. “Rabbi, have I got a story to tell you! It happened 35 years ago in London, Ontario and I'll never forget it."

When my eldest son was just a toddler, my husband and I traveled to Toronto, Canada on a Friday morning. We wouldn't normally fly on a Friday but since this was the summer, Shabbos was late and the trip was short, so we figured all would be good. Midair, the pilot made an announcement. There was a terrible windstorm and the Toronto airport was closed. We had no choice but to fly to London. There was so much upheaval amongst the passengers, some thought we were flying to London, England. Who had even heard of this place in Ontario?

Shabbos was coming. There was absolutely no way this would work for us.

A few minutes later the pilot told us that no one would be able to get off the plane until bus arrangements to Toronto were secured and customs officials completed their plans to process everyone and their luggage. Everyone would need to sit tight and wait.

My husband and I looked at each other, wide eyed. Shabbos was coming. There was absolutely no way this would work for us. By the time we would land it would be close to Shabbos. We needed to get off the plane as soon as possible. We called over the flight attendant and were told that the only way we could disembark right away would be if we declared a medical emergency. And we would be forfeiting not only the ride to Toronto but we would have to get off the plane minus our luggage. That means no clothing, no more diapers for my toddler, no food besides the few snacks we had. Nothing.

But the sun was setting soon and there was no stopping Shabbos. We knew what we needed to do. I was expecting so I declared a medical necessity to leave. The moment the plane touched the runway, we carried our son, our hand luggage, left the plane and all its passengers behind. We looked around. We were standing in the middle of a cornfield. The heat was sweltering. Where in the world were we? What would we do?

We walked into the tiny terminal. There was not a soul to be seen. Now what?

I sat down on one of the empty chairs, holding my little boy and started to cry. My husband tried to calm me but what would we eat? How would I care for my son? What kind of Shabbos would this be?

A woman appeared behind one of the ticket counters. After asking us about our situation she said that she thinks she knows of one Jewish couple in town. Would we want her to call them? She added that he was a professor at University of Western Ontario.

We were doubtful. A professor? Does he know about Shabbos observance? Does he keep kosher? Who knows who these people are? And we would be strangers to them, too.

The women found the professor’s number and dialed. We explained our situation, wary of the voice on the other end. Hesitantly, we asked, "Do you keep Shabbos? Are you kosher?"

We heard a wonderful laugh filled with joy. "Shalom aleichem! Come join us for Shabbos! We will be so happy to have Shabbos guests!"

A few moments later we found ourselves in the home of a most welcoming couple. They somehow secured diapers for our son, gave us fresh clothing to change into, iced drinks and warm smiles. Incredibly, we felt at home. The professor had much Torah wisdom to share throughout the meal. There were all types of interesting people joining; Jews who were tasting Shabbos for the very first time.

The professor’s wife had more than enough delicious food even though we were unplanned guests. It was only after Shabbos that we discovered the great kindness of this couple. They had given us their very own bedroom to sleep in because it was the only one with air conditioning. They slept in an airless room so that we would be comfortable.

We were touched to our core. We had never experienced such hospitality.

After Shabbos they arranged our transportation to Toronto. We were touched to our core. We had never experienced such hospitality, in the spirit of Abraham and Sarah in the barren desert.

Rabbi Block was silent for a moment. His eyes glistened.

“That professor? That was my father. You actually stayed in my home and spent Shabbos with my parents!”

I was speechless. I called my husband and said, “London, Ontario, tell me what comes to mind?” Without a pause, my husband recalled the professor, his wife and their mitzvah that remains in our hearts till today.

I had not known that Dr. Yitzchok Block had received his PhD from Harvard, was a brilliant scholar, and when offered a professorship in London, Ontario he had truly wanted to become a rabbi, instead. “What will we do there?” Dr. Block and his wife Laya asked the Lubavitcher Rebbe.

“You will find what there is to be done,” the Rebbe said.

We are placed on this earth to create a legacy, to make a difference, to shine our light. We can't realize the impact we have with just one deed, one good word, one Shabbos. But here we are, 35 years later and the kindness has never been forgotten.

Who knows what we can do today that will sprinkle our magic for years to come?

The Life and Times of Glikl bas Leyb: a 17th-Century Woman for the Ages

My Name was My Mask

Song of Passaic
Bechukotai 5782: Divine Retribution
Behar 5782: Working to Live or Living to Work?
The Wholeness of Being Broken
Comments
MOST POPULAR IN Jewish Society
Our privacy policy