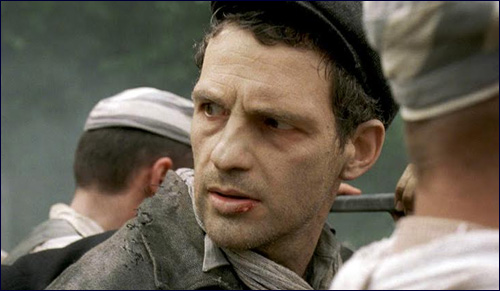 The director and lead actor of the award-winning Holocaust film are two Jews who are passionate about their people and history.

This plea, daring and heartfelt, is uttered by the character of Saul Auslander (Geza Rohrig) in the haunting, harrowing Son of Saul, the debut film by Jewish Hungarian filmmaker Laszlo Nemes that has been nominated for best foreign film in the Academy Awards and already won the Golden Globe Award for a foreign film – a first for a Hungarian film.

Saul is the traumatized, moving-by-rote prisoner in Auschwitz who must do the unspeakable work of the Sonderkommando. Marked with giant red “X’s” on the backs of their frayed jackets, Sonderdommando like Saul pick the valuables from the clothing of the Jews who have just stripped naked, even as he hears their screams from the “showers” behind the door. After filling the boxes with the Jews’ valuables to give to the Germans, he must move the corpses (“pieces,” as the Nazis grotesquely call the bodies) from the gas chambers and into the crematoria.

But when Saul discovers a young boy, somehow still barely alive even after the gas chamber, he becomes convinced the boy is his son. He watches as a Nazi doctor kills the boy minutes later and requests an autopsy on this unusual “specimen.” Suddenly, Saul’s life has purpose: He wants to prevent the autopsy, forbidden by Jewish law, find a rabbi to say Kaddish, and try to give a proper burial for the child, his child. In the inferno of Auschwitz.

Saul speaks very few words in the film. What, after all, is there to say when your life is that of a slave forcibly participating in man’s most brutal inhumanity to man? Even the Sonderkommando know they may be killed at any time, perhaps shot on the whim of a Nazi guard. So when Saul does speak, it has an added poignancy. Now awakened from his almost stupor-like and unthinking role, Saul asks the man he believes is the doctor in the medical examining room not to cut the boy. The man answers, “I’m just another prisoner like you.” Still, he hides the body to help Saul try to fulfill his newfound mission.

Meanwhile, other Sonderkommando are planning a rebellion against their Nazi captors, yet Saul is now distracted from that mission. He is now driven wholly by his determination to treat this one Jew, this one human being, with the humanity and respect that Jewish law mandates. In trying to protect this boy’s body, which had housed a precious soul, Saul sees a chance to in some small measure counter the gruesome “work” that otherwise fills his days and nights. Saul now has a way to protest this most heinous insult to God and to human dignity.

The camera angle remains tightly focused throughout the film on Saul’s upper body, often from the back of his head, so that viewers see what Saul sees. Most of the atrocities remain just out of focus and almost out of range, as if Saul also tries to avert his eyes from the nightmare surrounding him. Still, “Son of Saul” is no less harrowing to watch. The drama of the film (filmed on an old military base in Budapest last year) revolves around whether Saul will be able to find a rabbi to say Kaddish and to actually bury this boy, and whether the rebellion against the guards (the movie is set in 1944, and even the prisoners sense the war will soon end) will succeed.

Son of Saul earned the Grand Prix award at the Cannes Film Festival this year and is Hungary’s official submission for the 2016 Academy Awards in the foreign film category. Most reviews have lauded this unusual, intense entry in the genre of Holocaust films. In an interview given to the Jewish Journal, the 38-year-old director and co-writer explained that his own great-grandparents perished in Auschwitz in 1944. “The first reason I made this film is because I’m angry,” Nemes said. “I could never come to terms with what happened, and the more I heard about it, the less I understood… I wanted to communicate the here-and-now sense of being in the middle of the killing process –- both the organization and the chaos. Focusing on one member of the Sonderkommando was a direct road into the heart of the extermination.”

Nemes shows one scene where someone makes the HaMotzie blessing over bread, and a few other hints that some prisoners tried to keep some vestige of their Judaism alive. Yet while the living conditions of the Sonderkommando were one notch up from an average prisoner, they are portrayed as constantly taunted and terrorized by the Nazis. Given the unfathomable job of the Sonderkommando, some have questioned whether they were simply less powerful Nazi collaborators, culpable for their roles.

But Geza Rohrig, who plays Saul, refutes this. He told the Jewish Journal, “The most demonic crime of the Nazis was to force the Sonderkommando to assist in the killing process. In doing so, they were taking away even their solace of being innocent. They were making Cain out of Abel…I would never dare to pass judgment on the people who…wanted to survive and to become the father of their children, did what they had to do just to make sure that they remained alive. They were 100 percent victims.”

A Month in Auschwitz

Rohrig himself is steeped in Holocaust memories. Orphaned at the age of four, he was adopted at age 12 from an orphanage in Budapest by Jewish family friends. His adopted grandfather had lost all his immediate family in Auschwitz and survived in a Hungarian ghetto. As a university student in Poland, Rohrig visited Auschwitz, keeping a promise to his adoptive grandfather. But instead of leaving after his visit, he couldn’t tear himself away. He visited daily for one month, meditating. After that month, Rohrig went to Israel, enrolling in yeshiva. He wanted to know what it meant to be Jewish, to understand his ancestors’ spiritual legacy. Rohrig, who became observant, lived in Jerusalem for two years, studied at a Chabad yeshiva in New Jersey for two years, and earned a master’s degree in Jewish education from New York’s Jewish Theological Seminary.

God had not been mute in the camp.

“God had not been mute in the camp,” Rohrig decided after years of thinking about the subject. “He was speaking through people who were still able to give up their portion of bread or to bury the dead like Saul; people who were doing good, even in that horrible place.” Rohrig now lives in Riverdale, New York, and has published a collection of poems about the Holocaust that he wrote while spending time at Auschwitz.

Son of Saul is a bleak and disturbing film. Yet its powerful storyline pays tribute to the vital Jewish idea that even during life’s darkest, most unfathomable times, it is possible to find a purpose, a life-affirming reason to try to live another day.

Return of the USS Liberty

Real Sports
The Blue Beyond
Great Place to Live
Is Eating Supposed To Be Spiritual?
Comments
MOST POPULAR IN Current Issues
Our privacy policy