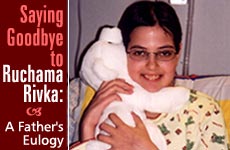 After a 12-year bout with leukemia, a teenager's parents say goodbye.

Rabbi Asher Resnick has been teaching and studying with Aish HaTorah for over 20 years. For the past 12 years, he and his family struggled with the leukemia of their daughter, Ruchama Rivka. On June 29, 2002 (19 Tammuz), Ruchama Rivka passed away at the age of 14, leaving many thousands in mourning. The following is the eulogy delivered by her father.

The Sages tell us: "Everything that God created is for the sake of raising awareness of God." That's our purpose in life – to understand how this world reflects the Almighty's greatness and to know what life is really all about.

Ruchama Rivka had a very difficult path in life, but she fulfilled her task. She became part of so many different people's lives – hundreds, maybe thousands – most who never knew her. She elevated and inspired them to greater God-consciousness. The Talmud says that the one who inspires others to do, is even greater than the one who does themselves. Think about how much heartfelt prayer was said, how much charity was given, how many acts of kindness, and how much teshuva she inspired. Ruchama Rivka accomplished in her 14 years more than many people do in a lifetime.

It was determined for Ruchama Rivka that her way to inspire awareness of God should be accomplished through pain and suffering. And she had a lot of suffering. I told her a number of times that she always needed to remember that there was nothing at all which she herself had done which had caused her suffering (which, after all, had begun when she was just two years old!). She was simply a vehicle to bring God-consciousness into the world.

Ruchama Rivka was a very, very strong fighter. She dealt with years and years of chemotherapy, intensive radiation, and four separate bone marrow transplants. Yet it was still such a shock when she left us; she had merited so many different miracles until that point, that I was sure that she would always get another one. After all, there were so many people who cared about her, so many people who were praying for her.

Ruchama Rivka was gentle and sensitive beyond her years; modest as every Jewish girl is meant to be. She loved doing mitzvot, and she especially loved doing them properly. Once we went to Bnei Brak to ask for a blessing from Rabbi and Rebbetzin Kanievsky. Rebbetzin Kanievsky suggested that she should learn two sections every day on proper speech as well as on trust in God. And she did it – every day, for months and months.

Ruchama Rivka was always very excited when it came time for the mitzvah of counting the Omer. She was always very determined to make it through to the end of the 49 days without forgetting a single day. This year, she was in the hospital almost the entire period of time. She knew she'd have to spend Shavuot in the hospital, and this upset her very much. But when she got to the last day before Shavuot and was able to say the blessing on the final day of the Omer (since she hadn't missed a single day), her face was shining! She was so happy to have been able to do the mitzvah properly.

She was even careful that none of her five machzorim (holiday prayer books), which were all kept in a single case, should ever come to the table. Why? So that there should never be any possibility that chametz would get on her Passover machzor. She always had care, precision, and maturity beyond her years. Her greatest pleasure was doing the right thing.

A week ago, Ruchama Rivka went into intensive care. It was the day of our wedding anniversary. She had a terrible infection in her lungs and throat, making it very difficult for her to speak. She told us how badly she felt that she wasn't able to get us an anniversary present. Then she told us how much she loved us, and gave us each what would be her final kiss goodbye.

She told us how much she loved us, and gave us each what would be a final kiss goodbye.

Ruchama Rivka, just before your bat mitzvah, while you were still recovering from your first bone marrow transplant, we spent some time learning together. We learned Maimonides' 13 Principles of Faith. We discussed how the Almighty has no limit to His power, and that He loves us more than we could ever imagine.

This lesson might have been very difficult for you to have heard and accepted at that time. You had already gone through so much at that point. But you did understand it and you fully accepted it. As the end was approaching this past Friday night, I repeated these messages to you over and over again. I hope very much that you heard me then, and I certainly know that now you can hear me, and I know that now you really understand them.

I want to tell you something special that I learned after your first relapse at age 11. It was a very hard time for all of us. You had begun this whole difficult process at two years old, had gone through all the chemotherapy for over two years along with all the checkups afterwards, and finally gotten to a point where we sincerely hoped that we would never ever have to deal with this leukemia again. And here we were a few months before your bat mitzvah, dealing with it again.

The answer which I came to was that these ideas aren't always so obvious or so simple. Even that which is both the ultimate good and salvation from God Himself, can sometimes be extremely hard for us to see and appreciate. This is what we are asking God to help us with.

Then I realized that's probably why these prayers come right after our request to God to "grant us a portion in your Torah". Only once we have that "portion" in Torah can we really feel satisfaction and joy in all that occurs to us in our lives. Ruchama Rivka, I'm sure that this is all very clear right now: We may not always understand how, but absolutely everything is always only for the best.

Your mother was superhuman during this whole period, spending months in the hospital.

It is traditional to ask the deceased for forgiveness at a funeral. Your mother was superhuman during this whole difficult period, the best mother that any child could ever have had. She was always there for you. Every single day. Sometimes for months and months in the hospital. She did everything for you. Emotionally, medically, everything! I also tried very hard. I hope that I did everything I could have done, both materially and spiritually. Please forgive us if there was anything we could have done for you that we didn't.

I have to express gratitude to the many different people who did so much for us. Family, friends and neighbors gave us so much kindness and support that it's hard to imagine that we could have dealt with everything without all of your help. In particular, the volunteers from Zichron Menachem helped us in every way imaginable. There was so much self-sacrifice, tremendous care and concern. It makes you proud to be a member of the Jewish people.

And now, Ruchama Rivka, I want to repeat to you the last blessing that I gave you this past Friday night. I put my hands on your head and said with all my concentration: "God should bless and protect you, God should reveal Himself to you, God should grant you final everlasting peace" (Numbers 6:24-26).

You didn't always have shalom in this world, certainly not like a typical child of age two or 14. Now God should finally grant you the true shalom you always so deeply wanted. You should be an advocate in heaven to help the entire Jewish people with the huge challenges they face now. During your life, you helped so many people to connect more deeply to reality. You should continue to help and to give us the true shalom which comes only through this clarity.

Ruchama Rivka, we love you and we'll miss you. It's so hard to say goodbye. It was, and will always be, a privilege to be your parent. We will never forget you.

Please learn Torah and do mitzvot in the merit of elevating the soul of Ruchama Rivka bas Asher Zevulun. If you would like to make a contribution in Ruchama Rivka’s memory to Zichron Menachem (an incredible organization which helps both kids with cancer as well as their families all throughout Israel) you can click on this link – Zichron Menachem -- [or send a donation to Children's Bridge of Zichron Menachem, 1333 Broadway, Suite 306, NY, NY 10018.

Read of the various efforts made during her lifetime:
Saving Ruchama Rivka
The Ruchama Project

Rabbi Asher Resnick was born and raised in LA and graduated from UCLA with a BA in Psychology. He received rabbinic ordination from Aish HaTorah and the Chief Rabbi of Jerusalem. He served as a senior lecturer at the Institute of Jewish Legal and Medical Ethics in San Francisco and at the Aish HaTorah Branch in New York. He has been teaching the foundations of Judaism for over 30 years at Aish HaTorah in Jerusalem, as well as in numerous other yeshivot, seminaries and kiruv training programs. As a close student of Rav Noach Weinberg, zt”l, he developed a special expertise in addressing fundamental issues in Judaism, as well as in bringing classical texts to life. As a bereaved parent, Rabbi Resnick’s extensive writings on loss, difficulties, and trauma provide a sensitive Jewish perspective on coping with these fundamental life issues. His website, JewishClarity.com, brings his expertise from over thirty-five years of teaching and writing to the wider world. It contains proofs of G-d and Torah, core philosophical and theological issues, accessible and meaningful messages for all of the Jewish Holidays, teaching materials for the Rambam, as well as classical Jewish sources addressing painful difficulties and challenges in life.

After 500 Years, My Family's Return to Judaism

Out of the Closet
Evolution 2.0: The Coming Darwinian Revolution
Chukat 5782: Let’s Play the Blame Game!
The Sin of Moses: The Two Ways to Communicate
Comments
MOST POPULAR IN Spirituality
Our privacy policy