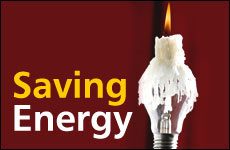 My wife and I are trying come up with ideas to save energy. But all of this thinking requires a lot of, well, energy.

In the old days, there was no such thing as home energy audits. Instead, we had fathers. Our fathers would say things like, “Turn off the lights when you leave the room!” and, “Close the door; you’re letting all the cold air in!” Then they’d ask if we thought they were made of money.

In the old days, there was no such thing as home energy audits. Instead, we had fathers.

But getting an energy audit is the thing to do nowadays. Especially in a leaky house like mine. We even have cold air coming through the electrical outlets. It’s like the power company is sending us cold air. Personally, I think it’s a ploy to make us use more gas.

Over the years, my wife and I have tried several things to make our home more energy efficient. We put several tons of old clothes in the attic to keep the heat in. We put sheets of plastic over our windows during the winter, most of which have subsequently blown away. We even replaced the humongous, 1960s-era, 300-lb. air conditioner that was stuck in the wall of the dining room, which used a lot of power, but made up for it in noise.

So when we heard that there were government programs that would send people to audit our house and do some of the work for free, we jumped at the idea, because we happen to know that our home does not have any insulation. We know this because when we opened up the wall of the dining room to replace the air conditioner, we peered inside and noticed that the entire house is insulated by what appears to be a huge, single-ply sheet of aluminum foil.

So we had some guys come over, and they looked at or house, and they counted how many windows we had. They also spent a lot of time crawling around the water heater, and they conducted a test wherein they closed all of our windows and set up an exhaust fan in our doorway that basically sucked all the air out of the house, so they could tell if there was a leak. Basically, if your house implodes like a soda can, you don’t have a leak.

Then they sat down and looked at our heating bills, and they said they’d present our case to find out how much work we’d qualify for.

“But we’re going to qualify for insulation, right?” we asked.

They hoped so. In fact, they didn’t put many other recommendations on our list, because they were hoping for insulation. And then they left.

That’s how it goes. The auditing guys don’t actually do the work; they just suck out all the air, point out what’s wrong with the house, and then they leave. They’re kind of like a mother-in-law.

A few weeks later, another pair of guys came in to do all the work. These guys were extremely energy efficient, by which I mean “lazy”. Almost everything they did actually made our house worse. For example, they installed weather stripping on our front door, but they put it on a little too close to the inside of the house, so that the door latch no longer caught in the hole, and the door would sometimes blow open by itself. The only way it would stay closed was if we locked the top lock. So now, thanks to the weather stripping, there was actually extra air blowing in around the door – so much, that I had to deal with it by thumb-tacking a blanket over the door every night. (After evening services – I didn’t make that mistake twice.)

Another thing they did was break the pull-down stairs to the attic. I think the logic was that if we never opened up the attic, we would save on our energy bills. We didn’t even know they broke it until the next time I tried pulling down the stairs, and a huge metal spring jumped out at me. So we had no access to our attic, and a month later our son was born, and guess where all his clothes were?

But we didn’t qualify for insulation. It turns out that the government doesn’t care how badly you need insulation, they just care how much you’ve been paying for heat. The more you’ve been paying, the more work you qualify for. And because we always keep our house at a temperature where we don’t actually have to remember to put the milk back in the fridge, we never paid enough to qualify for such a big job.

“So can we crank up the heat this winter and apply again?” we wanted to know.

“But we don’t have insulation!” I said. “I checked when I was putting in the air conditioner!”

So they gave us a big plastic cover to put over the air conditioner during the winter.

A few months later, we heard about another energy program, so we applied, because we were still hoping for insulation. So they came over, counted the windows, crawled around the water heater, sucked more air out of the house, and asked us what that weird plastic box was in our dining room. And then they did the math and said they would definitely be able to get us insulation. And a couple of months later, sure enough, we got a letter informing us that because we’d had the other company do some work, we wouldn’t qualify for ANY work with this company.

And then I received a call from a friend of mine, Yossie, who, as it turns out, is studying to become an energy auditor. He told me that for his final exam, he needed to audit an actual house with an instructor looking over his shoulder, and then give a list of recommendations, which the homeowner would then be free to toss. So he asked if he could use my house.

Then he asked me if I’d ever had an energy audit.

I also hadn’t considered what the non-Jewish instructor would think.

Yossie ended up scheduling the test for 4 days before Passover. I offered to show him the results of our previous audits, because my idea was that he should come into the house, sniff the air, touch the wall and taste his finger, and go, “This house doesn’t have any insulation!” and totally bowl the instructor over.

But what I didn’t think about, before they came over, was that since they were going to test the appliances and exhaust systems, it was not great that the entire kitchen was covered, top to bottom, in thick silver foil (for Passover).

I also hadn’t considered what the non-Jewish instructor would think. He walked in and yes, he was totally bowled over. It looked like we were preparing to put the whole kitchen in the oven.

“Yeah,” I said. “This is what the last energy auditor suggested we do.”

In the end, Yossie did catch some things that the other guys missed, and he gave us a list of recommendations, which we’ve subsequently tossed. Because now we’ve had 3 audits, and so far, according to our bills, we haven’t saved on heating at all. Maybe a few more audits ought to do it.

How to Help Jewish Singles