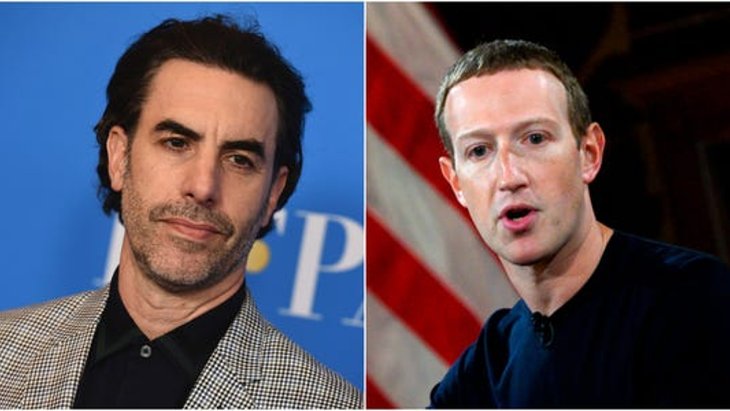 We need to fundamentally reevaluate how “the greatest propaganda machine in history” spreads hate, conspiracies and lies.

Sacha Baron Cohen achieved international renown as a comedian. What he had to say however last Thursday night, speaking at the Anti-Defamation League’s International Leadership Summit on hate and anti-Semitism, was deadly serious.

Hopefully his spot-on analysis of a major contemporary contribution to the spread of worldwide hatred and divisiveness will get the hearing it rightfully deserves – and perhaps might even be the spark to action that will bring about change to the horror of the present unregulated chaos of our social media.

Criticizing what he called “the greatest propaganda machine in history” he blamed the tech companies – YouTube, Twitter, Google and especially Facebook – for “stoking the fires of bigotry and enabling the spread of dangerous conspiracies, often fueled by algorithms designed to keep consumers hooked.”

If Facebook were around in the 1930s, it would have allowed Hitler to post 30-second ads on his ‘solution’ to the ‘Jewish problem.'”

“If you pay them, Facebook will run any ‘political’ ad you want, even if it’s a lie,” he said, noting the company would even help an advertiser find the right microtargeted audience for the message. “Under this twisted logic, if Facebook were around in the 1930s, it would have allowed Hitler to post 30-second ads on his ‘solution’ to the ‘Jewish problem.'”

Cohen called for a fundamental reevaluation of how social media “spreads hate, conspiracies and lies,” pointing to Facebook CEO Mark Zuckerberg’s recent speech warning against laws and regulations targeting companies like his. “Freedom of speech is not freedom of reach,” Cohen asserted. “I think we could all agree that we should not be giving bigots and pedophiles a free platform to amplify their views and target their victims.”

In the speech, Cohen urged that the companies be seen as “what they really are – the largest publishers in history.” “As such, he said, they should follow basic standards and practices that newspapers, magazines and TV news adhere to in their daily reporting.” Publishers can be sued for libel. People can be sued for defamation. Yet amazingly enough social media are exempt from responsibility. Social media companies are almost completely protected from liability for the content their users post – no matter how indecent – by Section 230 of, astonishingly enough, the Communications Decency Act!

To get some idea of the relevance of Cohen’s criticisms it might be interesting to remember that in October 2015, twenty thousand Israelis joined a civil lawsuit filed against Facebook in the Supreme Court for the State of New York. Led by the civil rights organization, Shurat HaDin, the suit alleged Facebook allows Palestinian extremists to openly recruit and train terrorists to plan violent attacks calling for the murder of Israeli Jews through their Facebook pages. Somehow though Facebook didn’t see anything wrong with making their site available to the highest terrorist bidders.

That may find striking similarity to the pernicious anonymous troll who posted a call-to-action on 4chan, a fringe online messaging board frequented by white supremacists, asking for people to create “a massive movement of fake Jewish profiles on Facebook, Twitter, etc.” Soon after that message was posted, numerous accounts impersonating Orthodox Jews emerged on Twitter sharing anti-Semitic and anti-Israel content.

Avital Chizhik-Goldschmidt, an editor with The Forward, an online Jewish American publication based in New York, writes of the day she landed at Newark Liberty International Airport in New Jersey from France when she turned on her phone to discover that her husband had also been targeted by the same 4chan scheme. The fake account was using a photo of her husband, a New York City rabbi, and featured a sign reading “Boycott Israel” behind her husband’s photo. After reporting it to Twitter, she found other accounts that seemed suspicious, too. “These trolls were impersonating far left, social justice warriors who were promoting anti-Israel content,” Chizhik-Goldschmidt said. “It’s very disturbing how they got the language to seem real – like a real person was writing this.”

I can hardly imagine what that must’ve been like. My picture is out there somewhere on the web and I can only thank God that I did not suddenly find myself starring in a Facebook or Twitter account with a fake quote attributed to me condemning Israel or praising the boycott divestment and sanctions movement!

In an unregulated social media environment none of us is safe from exploitation.

While the United States continues to be slow in both recognizing as well as responding to this threat, lawmakers in Australia just recently passed new legislation to hold social media companies accountable for the spread of hate content on their platforms. With its implementation, companies such as Facebook and YouTube could be subject to huge fines, and their executives threatened with jail time, if they do not ensure the “expeditious” removal of inappropriate material. The Sharing of Abhorrent Violent Material bill was enacted following criticism of social media for enabling the live broadcast of the horrific Christchurch, New Zealand mosque massacres.

The world was created by words. We need to remember that it can be destroyed by words as well.

For Jews it becomes even more necessary to identify the powerful role of words misused as propaganda for evil. Historian Karl Dietrich Bracher argued that the success of Nazi ideology can only be understood via the role of propaganda in the Third Reich. The Nazis’ modern techniques of opinion-formation in order to create a “truly religio-psychological phenomenon” made the propaganda especially powerful.

Joseph Goebbels, the appointed minister of propaganda of Nazi Germany, once said: “There are two ways to make a revolution. You can blast your enemy with machine guns until he acknowledges the superiority of those holding the machine guns. That is one way. Or you can transform the nation through a revolution of the spirit.” Hitler’s chief architect, Albert Speer, told the Nuremberg Tribunal “that what distinguished the Third Reich from all previous dictatorships was its use of all the means of communication to sustain itself and to deprive its objects of the power of independent thought.” Hitler was a magician of illusion. The cultural historian Piers Brendon has described propaganda as the “gospel” of Nazism.

How tragic would it be if we pervert the potential of the Internet and social media from its ability to spread knowledge around the world faster than any other time in history to the creation of a medium that permits deceit, deception and dishonesty to speedily triumph. The rabbis long ago prophetically cautioned: the world was created by words – we need to remember that it can be destroyed by words as well.

The Significance of the Spanish Elections